What is a supermoon?

Several times a year, the moon can appear larger and brighter than normal in a phenomenon called a supermoon.

The term supermoon is a relatively new term that has made its way into pop culture to describe a full moon that falls near or on perigee, the point in the moon’s orbit where it is closest to the Earth.

Even though it is an astronomical event, the term originated from an astrologer named Richard Nolle.

Nolle coined the term supermoon in 1979 in Horoscope Magazine to describe a new or full moon when it is at or within 90 percent of its closest approach to Earth.

A full moon that falls near or on perigee will appear slightly larger and brighter than other full moons.

In November of 2016, the full moon fell within just a few hours of an unusually close perigee, making it the biggest full moon in decades. Because of this, the moon appeared approximately 14 percent larger and 30 percent brighter than a full moon that falls near apogee, the point in the moon’s orbit where it is farthest away from the Earth. 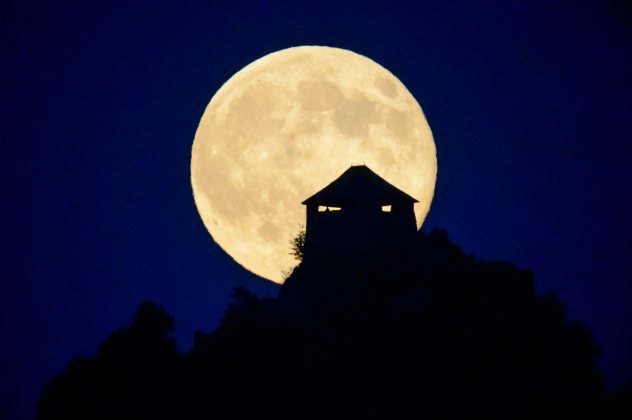 In addition to appearing larger and brighter than normal, a supermoon can also affect the oceans.

“The supermoon plays a role in the tides and has a stronger influence than other full moons,” AccuWeather Senior Meteorologist David Samuhel said.

This means that areas near the coast experience larger-than-normal tides and a greater risk of coastal flooding around the time of a supermoon. However, a super full moon's influence is not quite as strong as a new moon that falls near perigee.

“When you have a new moon, the sun and the moon align and work in tandem, resulting in some of the biggest tides,” Samuhel said.

Do full moons and supermoons really influence people and animals?
5 dark sites perfect for stargazing in the United States
Why do meteors glow in vibrant colors?
AccuWeather Astronomy Facebook Page

The best time to observe a supermoon is shortly after moonrise and right before moonset.

At these times, the moon is close to the horizon, creating an illusion that makes it appear even larger than when it is high in the night sky.

This is also the best time to take photographs of the moon, not only because of the illusion, but also because the moon will appear next to landmarks, such as a city skyline.