A brush fire that erupted Wednesday engulfed at least 200 acres and though the flames were fanned by gusts, one local official said the winds on Wednesday weren't anything out of the ordinary.

At least 20 homes were destroyed when a 195-acre fire in Laguna Niguel forced evacuations. The fire broke out Wednesday afternoon and quickly erupted in size.

At least 20 homes have been destroyed, and an additional 11 damaged, by a rapidly spreading brush fire that ignited early Wednesday afternoon in Southern California, officials said.

According to Orange County Sheriff's Department Sgt. Scott Steinle, the fire broke out near the South Orange County Wastewater Authorities Coastal Treatment Plant west of the city of Laguna Niguel, California. A short time later, the fire had exploded in size and flames had overcome several homes in the area.

The fire was burning an area between Laguna Niguel and Aliso Viejo, located roughly 50 miles southeast of Los Angeles in the San Joaquin Hills of Orange County. Known as the Coastal Fire, the blaze engulfed more than 200 acres as of Monday morning with 80% containment. 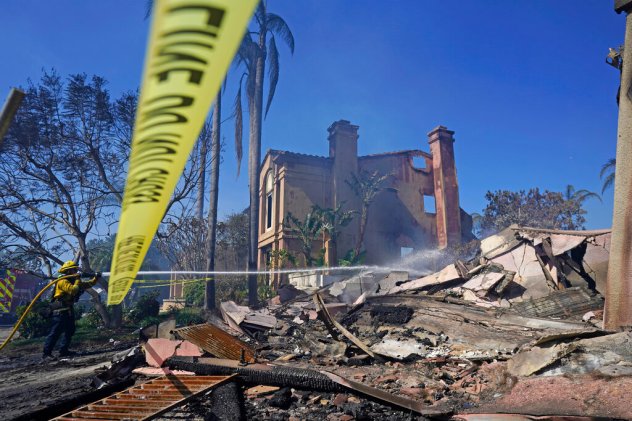 A firefighter hoses down hot spots from a home in the aftermath of the Coastal Fire Thursday, May 12, 2022, in Laguna Niguel, Calif. (AP Photo/Marcio Jose Sanchez)

Although coastal winds fanned the flames, one local fire official said the winds impacting the Laguna Hills region on Wednesday were nothing out of the ordinary.

"The winds we experienced today are not unusual," Orange County fire chief Brian Fennessy told reporters. "These were not Santa Ana winds. These are coastal winds that we experience generally every day."

"The big difference," Fennessy added, is the parched conditions plaguing the region. "We’re seeing it again with the climate change." The fuel beds "throughout Southern California [and] throughout the West are so dry that a fire like this is going to be more commonplace.”

AccuWeather Chief Meteorologist Jonathan Porter said the historic lack of precipitation for a stretch of later winter into early spring has California in a perilous state. "Although there was some rain and mountain snow in California in parts of December and April, the 'wet' season overall featured record low amounts of precipitation," Porter said, "In fact, we witnessed the record driest January through April time period in California in 128 years this year, a truly staggering statistic."

In a press conference, Captain Virgil Asuncion with the Laguna Niguel Police Services stated that the Coastal Fire prompted mandatory evacuations in multiple streets throughout the city. At least 100 structures have been manually evacuated. On Thursday morning, area roads leading to this city region were been shut down. However, some mandatory evacuations and road closures had been lifted by early Saturday morning, as containment of the fire had improved.

At least 20 homes were destroyed by a brush fire that spread rapidly amid strong winds in Laguna Niguel, California, on May 11, 2022.

Footage captured by nearby residents showed the smoke billowing over the ridgelines near Laguna Niguel and flames growing closer to the massive homes. Onshore winds blowing across the region spread the smoke and fires farther inland.

Deputies and fire personnel went door to door Wednesday afternoon to ensure the safety of residents. As of Thursday, roughly 900 homes were evacuated. By Saturday morning most of the evacuation orders had been lifted, however the residents of approximately 130 homes were still unable to return.

Due to the steep terrain around the Aliso Canyon, firefighters faced difficulty running hose lines and transporting ground crews to the affected area. Videos surfaced on Wednesday showed fixed-wing planes releasing fire retardants and water-dropping helicopters in an attempt to gain control of the flames.

On Wednesday, a state of emergency was declared in Laguna Niguel as the fire expanded and encroached on area homes. 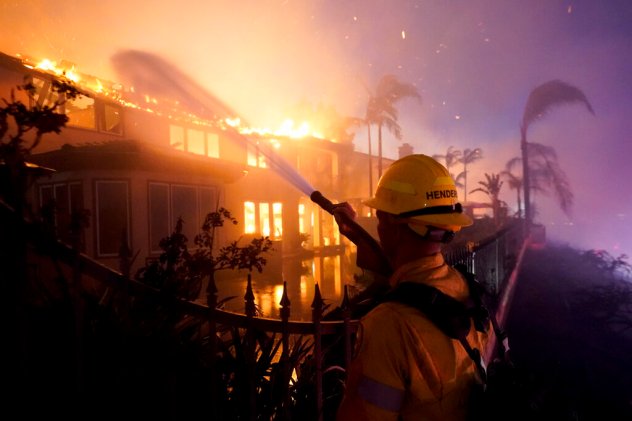 A firefighter works to put out a structure burning during a wildfire Wednesday, May 11, 2022, in Laguna Niguel, Calif. (AP Photo/Marcio J. Sanchez)

The ignition of the brush fire has not yet been determined. However, an investigation has been opened after Southern California Edison sent a letter to the California Public Utilities Commission reporting "circuit activity" to its equipment near the time and location of where the Coastal Fire began. 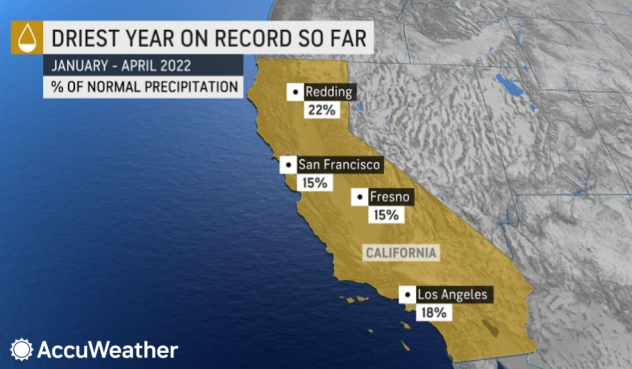 The lack of observed rainfall over the previous months has exacerbated the drought conditions in Southern California. According to the U.S. Drought Monitor, Orange County is currently in a state of moderate to severe drought.

"Observed winds across the region Wednesday afternoon and evening were gusting from the west-southwest at speeds of 20 to 30 mph," according to AccuWeather Meteorologist Lauren Hyde. 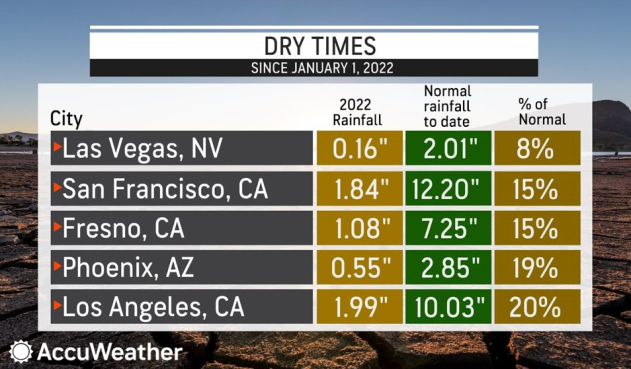 This past February, the Emerald Fire erupted to the northwest of Laguna Beach and grew to a size of 154 acres. Prior to that, the last fire in the region was the Laguna Fire of 1993 which consumed approximately 14,337 acres of the Crystal Cover State Park and the Laguna Coast Wilderness Area.

According to the Orange County Fire Authority, one firefighter was injured on the fire line.

"Wednesday's devastating and quickly-moving wildfire shows the alarming level of wildfire risk across the Southwestern United States as highlighted by AccuWeather experts in its 2022 Wildfire Outlook," Porter said. AccuWeather forecasters are calling for an above-normal wildfire season in 2022 and predicting 68,000 to 72,000 fires and 8.1 to 8.3 million acres burned.

Close call with lightning strike: ‘I thought I was a goner’

Heat dome to bring return of triple-digit temps to Southwest