Heat dome to bring return of triple-digit temps to Southwest

Heat dome to build across Southwest

A shift in the jet stream will allow for temperatures to build across the Southwest late this week and into the weekend, challenging record high temperatures and sending the mercury into the triple digits.

AccuWeather forecasters say the Southwest is about to embark on a temperature roller-coaster ride as temperatures soar 10-20 degrees Fahrenheit above normal for many locations in the coming days.

So far this week, a large swath of the southwestern United States has encountered unseasonably cool conditions, largely due to a deep southward dip in the jet stream. Places such as Death Valley, California, and Las Vegas experienced high temperatures 10-15 F below average for several days early this week. On Wednesday, Death Valley managed to hit only 78 F which is 21 degrees lower than the average high of 99 F. Cities such as Chicago and Colorado Springs, Colorado, were hotter this week.

The relief from the heat will be brief, according to forecasters. The atmospheric traffic jam that has been in place since last week, bringing record-breaking heat and violent severe thunderstorms to the Central states, unseasonable warmth to the East and an abnormal chill to the West, will finally start to clear out this weekend.

The jet stream will begin to shift northward early in the weekend and will leave room for heat currently trapped south of the U.S. to make its way north.

"This shift in the jet stream will allow a 'heat dome' to build across the Southwest this weekend and into next week," AccuWeather Senior Meteorologist Dan Pydynowski explained. 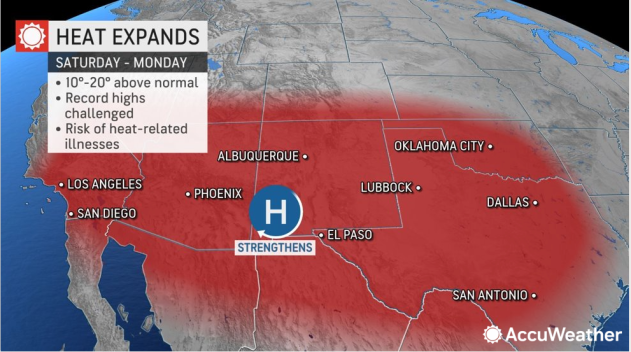 Temperatures will begin to ramp up across the Southwest and South Central states starting on Sunday.

Cities including Phoenix, where temperatures did not make it out of the 80s on Wednesday, will soar into triple digits by Saturday. Even Flagstaff, Arizona, a city located at an elevation of about 7,000 feet, will experience high temperatures 15-20 degrees above normal by Saturday.

While high temperatures near the triple-digit mark aren't terribly uncommon for Phoenix during the latter half of spring, the upcoming week of sizzling heat will still be notable. Phoenix has hit 100 F or more only once so far in 2022. This occurred on May 7 when the mercury topped out at 102 F. The average for when the first 100-degree day occurs in Phoenix is May 6.

However, after waiting months for the first 100-degree reading, many more will come in rapid succession this weekend and next week. AccuWeather forecasters predict that the high temperature in Phoenix will meet or exceed 100 F from Saturday through at least the middle of next week. Despite the high heat, meteorologists say Phoenix will likely fall short of setting any daily record highs.

Heat will continue to expand in both areal coverage and intensity on Sunday, with many locations climbing a handful of degrees higher than Saturday. 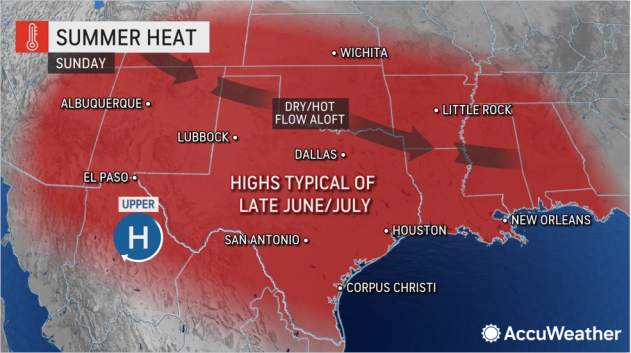 "Flagstaff will have a high near 80 F on Sunday, which is very close to the daily record high for the date of 81 F, set back in 1937," Pydynowski said.

Elsewhere in Arizona on Sunday, Tucson will have the opportunity to challenge its record high for the day of 104 F from 1934.

For many locations from Central and Southern California through the Desert Southwest and even into the South Central states, conditions will feel downright summerlike as high temperatures will be closer to mid- to late-June levels. This summerlike heat will stick around for many through at least Monday. For some, temperatures will remain elevated well into the upcoming week.

AccuWeather forecasters say one of the reasons the southwestern portion of the U.S. is able to heat up so quickly after a brief cooldown is due to the current drought status across the region.

"It is bone dry across the Southwest," AccuWeather Senior Meteorologist Joe Lundberg observed. 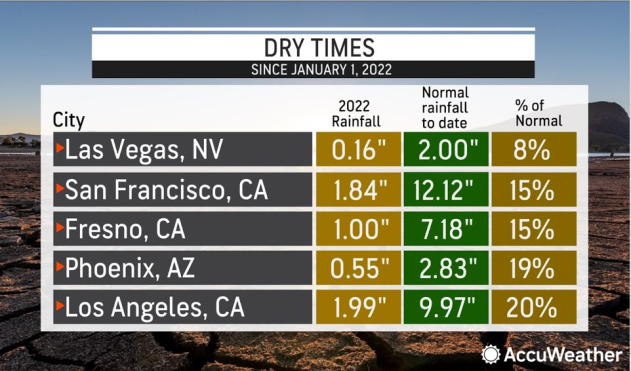 When there is no moisture in the soil for the sun to evaporate, solar radiation heats the dry ground directly.

"This ends up adding an extra couple of degrees of heat into the atmosphere which sets up a feedback loop," Lundberg explained. "Extra heat dries out the ground even more, adding once again to the overall strength of the heat."

Las Vegas has received an abysmal 8 percent of its normal rainfall so far this year while cities such as Los Angeles and Phoenix are only around 20 percent of normal.

AccuWeather forecasters say relief from the heat will not be quick to arrive as the first chance for a pattern shift in the upper levels of the atmosphere will not arrive until late next week.

Total ‘Blood Moon’ eclipse to rise over US tonight