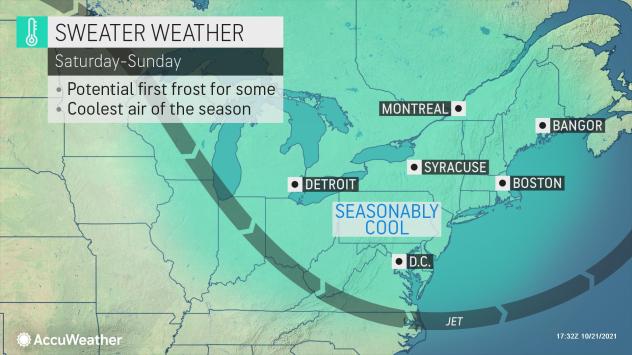 Unseasonable warmth has been the norm across the Northeast so far this autumn, a trend that continued this week. However, AccuWeather meteorologists say, progressively colder conditions will settle over the region for the second weekend in a row. Not only will the coldest air of the season arrive, but the first frost for many areas is likely, and even some brief snowfall could fall in some locations.

The next wave of chilly air was already gathering momentum at midweek and was on its way to the Northeast. A storm that brought several inches to a foot of snow in Wyoming will push eastward into Friday. As the chilly air clashes with warmth in parts of Ohio, West Virginia, western Pennsylvania and western New York state, showers and locally heavy, gusty thunderstorms are predicted to erupt on Thursday.

The new push of chilly air will sweep over the Northeast and make its presence known this weekend into early next week. Daytime temperatures will trend downward across the region by 15-30 degrees Fahrenheit from Thursday to Sunday.

A few more locations at high elevations in Upstate New York and northern New England may experience rain showers that can briefly mix with a bit of sleet or wet snowflakes from late Saturday into Sunday. Snow showers could coat the ground over the higher terrain of the Adirondacks and the Green and White Mountains of New England.

Saranac Lake, New York; Montpelier, Vermont, and Caribou, Maine, may all get a quick preview of the months to come with winter precipitation in the forecast.

During the depths of the chilly pattern from Sunday to Monday, daytime highs are forecast to range from the mid-40s over the northern Appalachians to the upper 60s around the Chesapeake Bay. This is in the same ballpark as daytime temperatures this past weekend. 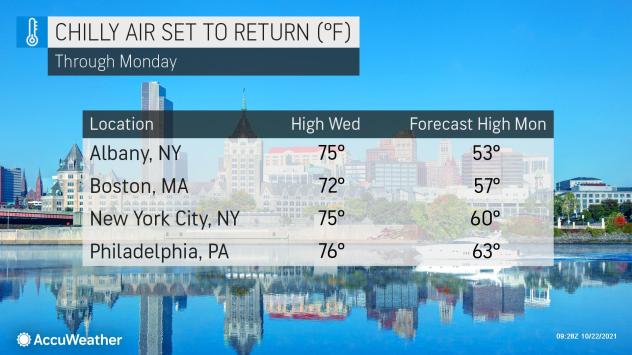 A bigger drop in temperatures is anticipated at night. More people may be reaching for a warmer blanket and perhaps turning on their heat for the first time, for those that managed to hold off last weekend. Nighttime lows will range from the mid-20s over the Adirondack Mountains of New York state, where a hard freeze is expected to occur, to the mid-50s around the Chesapeake Bay.

"It is not that this new burst of chilly air will be so abnormal for the second half of October, as it will not be, but what makes it stand out is the lack of chilly air so far this season for the Northeast," AccuWeather Senior Meteorologist Joe Lundberg said.

That wave of chilly air brought a true taste of autumn to the Northeast with some of the lowest temperatures recorded since late May and early June. A bit of snow even fell over the highest elevations of New England from Sunday to Monday. However, warm air returned in earnest, and much of the region can expect highs of 10-20 degrees Fahrenheit above average through late week. Highs will generally be in the 60s and 70s with a few places around the Chesapeake Bay potentially flirting with the 80-degree-Fahrenheit mark.

But the upcoming chilly outbreak will bring the lowest temperatures since early May and late April in some cases. Burlington, Vermont, has not yet dipped below 40 degrees this autumn. Temperatures are forecast to drop to 37 in the city along the shores of Lake Champlain on both Friday night and Saturday night. The last time it was this chilly at night was on May 7, when the morning low was 34. 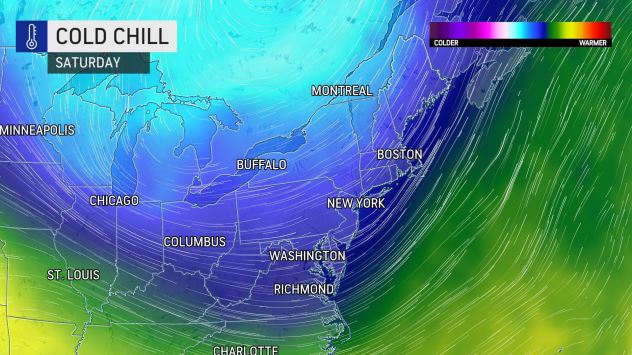 It has been so mild that the low temperature in New York City had failed to drop below 50 F until Monday morning, when the mercury hit 49. Not only was that milestone approaching a record late date, which stands at Oct. 20, 2005, but it also happened one day after Atlanta had dipped below the 50 F.

A few locations in the interior Northeast managed to dip to frosty levels earlier this week, where skies became clear and winds diminished. Cloud cover and winds will once again determine how widespread frosts and freezes become from Saturday night to Monday night, according to Lundberg.

Cloud cover and breezes tend to prevent cold air from pooling near the ground and in the valleys. Rivers, lakes, bays, the ocean and major urban areas also tend to elevate nighttime temperatures, especially in the autumn.

Tender flowers and vegetables may need to be protected from frosty conditions in some areas this weekend.

"The outbreak of chilly air from this weekend to early next week will mark the end of the growing season from the northern tier of Pennsylvania and upstate New York to northern and the interior of central New England, where lows will range from the mid-20s to the lower 30s," Lundberg said, adding that this is happening right around the normal time or perhaps a bit later than average in some cases.

In the major urban areas and along much of the heavily populated Interstate-95 corridor, temperatures are likely to remain high enough to prevent a frost. Some of clouds and spotty rain may also help to keep nighttime temperatures elevated from Sunday night to Tuesday night from parts of the central Appalachians to the mid-Atlantic coast. If the same storm system was to occur later this autumn, such as in mid- to late-November when conditions are cooler, then it might be able to produce an area of wet snow in part of the region. The average date of the first snowfall for much of the mid-Atlantic is not until the middle of December.