And it also beat a slew of other mid-Atlantic and Northeast cities. The city even gave Buffalo a run for its money in this department with the two ending in a photo finish.

Temperatures will dip into the low 40s and remain low in the Northeast to start the week, as the dreary conditions continue to feel more like November than mid-October.

Atlanta's temperature plummeted into the 40s early on Sunday morning -- a mark that New York City did not reach until a day later when Central Park hit a low of 49. According to the National Weather Service (NWS), New York City hadn't dipped below 50 F yet this fall prior to that early Monday reading, which came close to the latest date on record for the first sub-50 reading of the season. That distinction will still belong to Oct. 20, 2005. Weather records for the city date back to the 1860s. Similarly, Atlanta dipped to that chilly mark ahead of other cities along the I-95 corridor, including Philadelphia, Washington, D.C., and even Boston.

In fact, the chill in the South combined with the mild conditions throughout the Northeast meant Atlanta actually reached below 50 for the first time on the same day that Buffalo, which is about 700 miles to the north, did. Atlanta went a little chillier, though, with the mercury bottoming out at 47 versus the 49-degree low in Buffalo.

Many cities across the northern tier of the country have rivaled the warmth observed across the southern United States, which is rarely seen, especially over the course of a two-week timeframe, according to AccuWeather meteorologists. 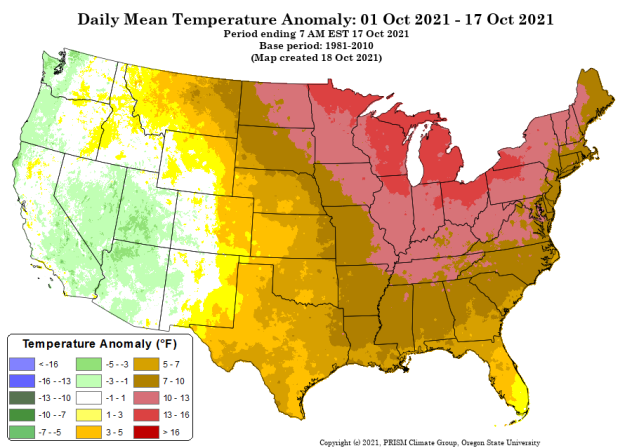 Daily mean temperature anomalies were extreme across parts of the Midwest and Northeast so far this October. (Prism Climate Group)

Another way to look at the unseasonably warm fall is by analyzing some average temperature comparisons. 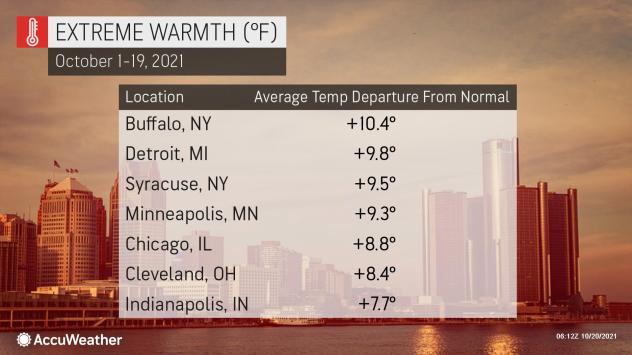 One constant through the first half of October across the Midwest and Northeast was consistently warm and humid nights. Many cities observed their latest dip down to 40 degrees or lower, and some cities had yet to even reach that mark.

Perhaps even more impressive is how some other cities across the South, in addition to Atlanta, have experienced lower temperatures than cities across the Northeast and Midwest. Huntsville, Alabama, dipped down to a chilly 40 degrees Monday morning, beating out Chicago to that mark. So far, Chicago's coldest morning occurred on Oct. 17, when the mercury dipped to 42.

Back up in the Northeast, places in and around the New York City metropolitan area have seen a similar fall trend to what has been observed in the Big Apple. Newark, New Jersey; Islip, New York; and Bridgeport, Connecticut, have all notched the warmest first half of fall on record, according to the NWS.

And the list does not end there. Burlington, Vermont, which is less than 50 miles south of the Canadian border, had dipped down to a season low of only 45 degrees through mid-October, and that was way back on Sept. 29. Near the Gulf coast, Mobile, Alabama, experienced colder conditions as the thermometer dipped to 44 degrees on Monday morning.

Now that Burlington has made it to Oct. 19 without cracking the 40-degree low-temperature mark, whenever the mercury finally makes it below 40 will be the latest date the city fell below 40 in its history. Low temperatures of 40 degrees or lower are not expected through the remainder of this week either, which will continue to extend this record.

Meteorologists say that warm weather can be tied to a delayed fall foliage season. While fall color is not officially tracked, anecdotal evidence from New Hampshire, New York and Connecticut indicates that this year's fall colors are close to tying fall 2018's latest peak on record.

AccuWeather Lead Long-Range Forecaster Paul Pastelok accurately predicted back in early September that fall colors would emerge late across the northern tier of the region, with peak fall foliage expected at least a week or two behind normal. 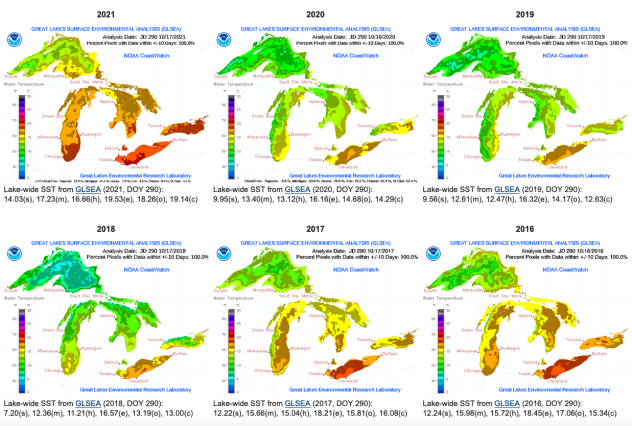 A snapshot comparison of Great Lakes water temperatures over the past six years. Water is noticeably warmer than what has been observed in recent years. (Great Lakes Environmental Research Labratory).

Another effect of the warm lakes was observed just this past weekend as cool air finally swept across the region. The contrast of warm water and cool air overhead led to the development of more than a dozen waterspouts across the Great Lakes. Some of those waterspouts near the Cleveland area offered spectators a brilliant sight.

Warmth of this magnitude across the lakes begins to raise some serious questions about the months to come as cold weather will inevitably arrive.

A towering waterspout twirled on Lake Erie near Cleveland, Ohio, on Oct. 17.

With AccuWeather long-range meteorologists predicting an increased occurrence of cold shots into the Great Lakes region in November and December, bursts of lake-effect snow could develop across areas downwind of the lakes. The added warmth from the Great Lakes will undoubtedly provide more fuel for these snow showers to become intense, whiteout snowstorms.

In the near-term forecast across the Midwest and Northeast, another climb toward above-average temperatures is in store through midweek after a rather chilly weekend. A lingering chill across New England will be a bit stubborn to exit over the next few days, but the rest of the Northeast and Midwest can expect a continued stretch of dry and settled conditions.

Even for those wishing for cooler conditions that come with autumn, many residents across the northern tier of the country may have noticed reduced heating costs so far this season. With natural gas and other energy prices soaring to the highest levels in decades, the warmth has resulted in a delay in energy bill spikes.

Which areas of US are in for it this winter? Here's the full forecast