The aurora will glow over part of the United States on Wednesday night following a series of explosions on the surface of the sun.

Wednesday night will feature the rare opportunity to see the glow of the aurora from the United States, but cloudy conditions could obscure the sky during the height of the celestial light show.

Recent explosions on the surface of the sun sent clouds of charged particles, known as coronal mass ejections, hurtling through the solar system. These clouds of particles are predicted to collide with Earth's magnetic field on Wednesday night into Thursday, sparking dazzling displays of the aurora.

NOAA's Space Weather Prediction Center (SWPC) has issued a G3 (strong) geomagnetic storm watch into Thursday, the threshold typically needed for skywatchers to see the glow of the aurora across a large portion of the northern tier of the U.S.

"Impacts to our technology from a G3 storm are usually minimal. However, a G3 storm has the potential to drive the aurora further away from its normal polar residence," the SWPC explained. During stronger storms, there could be disruptions to GPS and fluctuations in the power grid, but these impacts are unlikely from this week's event. 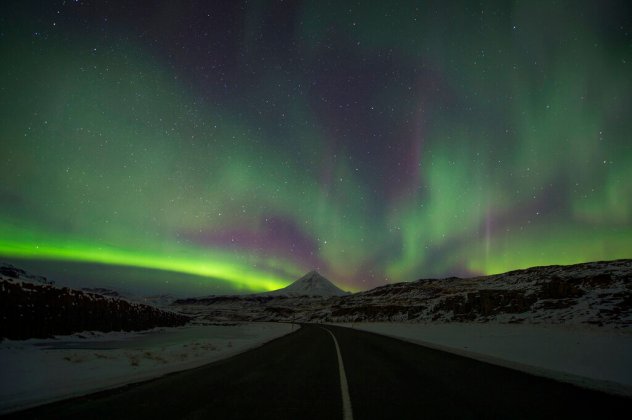 The aurora on Wednesday night could be seen as far south as Pennsylvania, Iowa, Wyoming, Idaho and Oregon, but clouds will be problematic for some skywatchers.

Mostly cloudy conditions are in the forecast for most of the Northeast, the Canadian provinces of Manitoba, Quebec and into Atlantic Canada, as well as over part of Minnesota. A patch of cloud could also spoil the show over central Oregon.

Partly to mostly clear conditions will be favorable for folks across most of the rest of North America with the best viewing conditions expected across the northern Plains, Canadian Prairies and the Rocky Mountains. 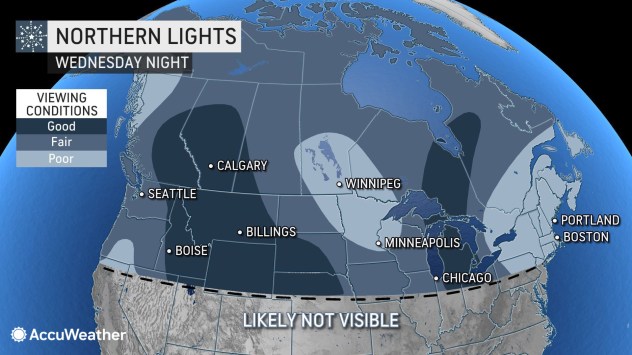 Taking light pollution into consideration can be just as important as checking the cloud forecast before stepping outside to look for the northern lights.

The aurora is often too dim to overcome the light pollution in and around cities. People in Chicago, Boston, Seattle and Minneapolis, as well as in the suburbs immediately surrounding the cities, will need to travel to a darker area for the chance to see the northern lights on Wednesday night.

The moon can also be a source of light pollution and will be glowing during the second half of the night, so it is best to avoid looking at the moon to increase the chances of seeing the celestial phenomenon.

The northern lights can create mesmerizing displays in areas closer to the poles, such as Alaska and much of Canada, but people across the U.S. should curb their expectations.

Typically in many areas of the northern U.S., the aurora appears like a green glow on the northern horizon rather than swirls of colors directly overhead.

In areas farther south, the aurora may not even be visible to the naked eye, but it can still be captured through long-exposure photography. This was the case in late July during a similar geomagnetic storm when one photographer was able to capture the glow of the northern lights in a photograph from Shenandoah National Park in Virginia.

The celestial light show will not be limited to just North America. The aurora may also be seen over parts of northern Europe as well as Australia and New Zealand.

Another round of northern lights is possible on Thursday night, although the glow of the aurora will likely not be visible as far south as they are on Wednesday night.