A telescope won’t be needed to see this week’s big astronomical event, and there will be some added bonuses for those who get up early enough to view the celestial duo.

Saturn has been a popular planet for stargazers this month as it reached its peak brightness on Aug. 14, but astronomy fans’ attention will shift to another easy-to-spot planet later this week.

Mars has been visible in the early-morning sky for the past few months, including in June when it was part of a rare planetary alignment before daybreak on June 24. Since then, Mars has become slightly brighter, and on Friday, Aug. 19, it will be showcased next to the moon to create an eye-grabbing astronomical sight.

The two objects will be extremely close and hard to miss in the early-morning sky for folks outside before daybreak, provided that it isn't cloudy. 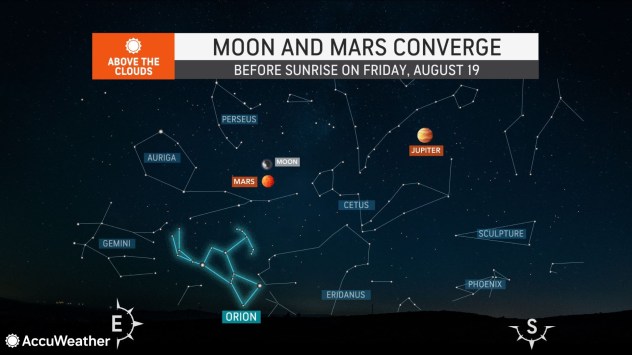 The celestial pairing will rise by around 1 a.m., local time, Friday and will remain visible until sunrise.

No telescope is needed to see the duo shine side-by-side in tight formation, but the two will be so close that people that do look at them through a telescope or with binoculars will see them in the same field of view.

There will also be some added bonuses for folks who get up early enough to see the event.

Jupiter has been growing brighter in recent weeks, and on Friday, Aug. 19, it will appear to the right of Mars and the moon. Jupiter is one of the easiest planets to find since it typically outshines every star in the early-morning sky.

Additionally, just before the morning twilight appears, the constellation Orion will be visible just above the eastern horizon.

Orion is one of the most popular constellations, but it is not visible throughout most of the summer because it is in the same region of the sky as the sun. However, as the Earth continues its journey orbiting around the sun, the constellation once again becomes visible in the night sky.

The constellation will be a fleeting sight in the late-summer sky, but it will gradually become easier to see as it turns into a prominent constellation during the autumn months and eventually the winter. 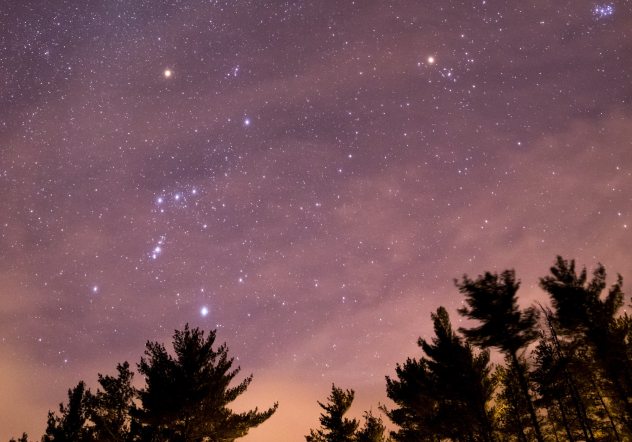 The constellation Orion glows in the night sky above some trees.

If it is cloudy Friday morning, people can see the moon and Mars again Saturday morning, but the duo will not be nearly as close when compared to Friday.

Friday morning's celestial meeting is just one of many meetups between Mars and the moon in the night sky in the coming months. The moon will once again sweep past Mars on the night of Sept. 16 into Sept 17, followed by yet another close encounter on the night of Oct. 14 into Oct. 15.