The storm wasn't strong or organized enough to earn the first name on the 2022 list of Atlantic storms, but it brought soaking rains and the threat of a tornado as it marched across the Southeast. 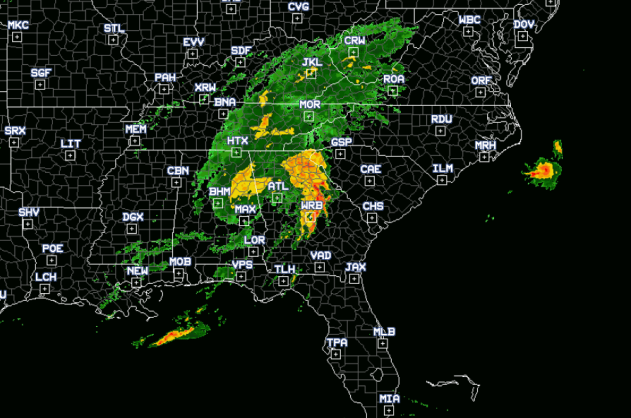 An image captured on Monday morning, May 23, 2022, of the national radar mosaic showing heavy rainfall across the Southeast U.S. The red colors are indicative of the heaviest rainfall rates while the greens are where lighter rainfall is occurring (AccuWeather Radar)

A storm of sub-tropical origin moved inland over the southeastern United States Sunday night into Monday and will continue to spread heavy rainfall and thunderstorms to the region into Monday evening. Although this storm was not named by the National Hurricane Center (NHC), had it reached tropical storm strength, it would have been the first storm of the Atlantic hurricane season and been named Alex.

And the way the system presented on radar, AccuWeather meteorologists noted, showed some resemblance to what a tropical system would look like after making landfall.

The sub-tropical disturbance that moved inland Sunday night and is expected to bring heavy thunderstorms to the Southeast on Monday, and there is some potential for damaging winds and even a tornado to form with the strongest part of the storm. Potential tornadoes were shown via radar developing in Stanly County, North Carolina Monday afternoon, and another storm in Durham County led to reports of downed trees and power lines, as well as several fires and a roof collapse in the area.

As a result of the eastern North Carolina chaos, a flood advisory has been issued for several counties in the region, including Edgecombe, Franklin, Halifax, Nash and Wilson counties.

In Raleigh, North Carolina, water began to cover major roadways in the area, providing a disturbance for local travelers:

In Lancaster County, South Carolina, another potential tornado was seen over radar moving throughout the area at approximately 6:45 p.m. EDT, with lightning and high wind gusts accompanying the severe event. About an hour later, what was called a "brief but significant" tornado event was seen in Chesnee, South Carolina, with footage of the created funnel cloud leaving an ominous atmosphere in the city.

Although the storm was just a run-of-the-mill area of low pressure over the Gulf of Mexico, it was able to organize itself just enough to become a definable feature Sunday night into Monday. The storm system has been able to draw a narrow plume of sub-tropical moisture into the region, and this was leading to rounds of heavy rainfall and gusty thunderstorms, with the heaviest rainfall focused over the southern Appalachians.

General rainfall amounts expected from this storm range from 1 to 2 inches in central and northern Georgia to portions of North Carolina and into Virginia, while 2 to 4 inches could fall where the heaviest downpours persist.

Cities that are expected to be impacted by the heavy rainfall include Asheville and Raleigh, North Carolina, Atlanta and northward into Virginia Beach.

While much of this rain will be beneficial to the region, there is the likelihood of flash flooding, especially in the mountains and foothills of eastern Tennessee, western North Carolina and southwestern Virginia into Monday night. 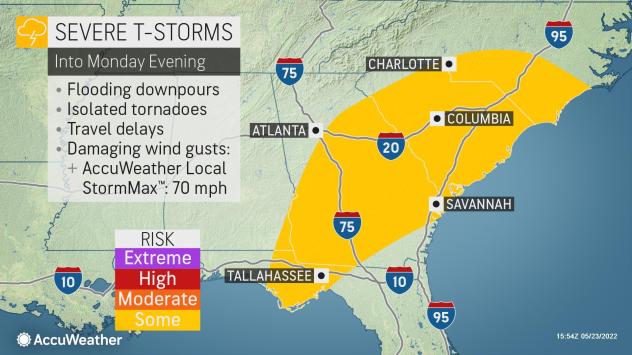 "Some locations may receive over an inch of rainfall in less than a half hour," AccuWeather Senior meteorologist Brett Anderson said.

Motorists traveling through these scenic areas should be prepared for flooded roadways, rock slides and poor visibility. Locally strong wind gusts may also cause tree damage and power outages, especially from Georgia through South Carolina and into portions of North Carolina through Monday evening.

The small storm will continue to track northeastward through the Southeast through Monday night and then turn eastward across North Carolina spreading rain into Virginia on Tuesday. Onshore winds are expected to be gusty across the region resulting in an increased risk of rough seas and possible rip currents to the Outer Banks and along the coast of Virginia.

This quick-moving storm is expected to move offshore and dissipate by Wednesday, but a few lingering showers are possible in the coastal communities of North Carolina, Virginia and far eastern Maryland.