A recent study conducted by the U.K. met office found that record-challenging heat waves in April and May have been made 100 times more likely by climate change.

Zoo animals and caretakers try to stay cool during a "heat wave emergency" in Rawalpindi, Pakistan, on May 18.

Following a record-breaking March and a searing April, May has also been unseasonably hot across much of India and Pakistan. Climate stations in New Delhi and Mumbai have averaged 4.7 and 2.3 in Fahrenheit, 2.80 and 1.28 in Celsius, respectively above normal for the month so far.

March of 2022 was the hottest March for India as a whole since 1901, according to meteorologists from the India Meteorological Department (IMD). When averaged across the entire country, March's average high temperature was an astonishing 3.35 F (1.86 C) above the climatological average.

India, home to nearly 1.4 billion people, has experienced heat wave after heat wave during the months of April and May, and researchers from the Met Office in the United Kingdom suggest that the chances of a record-breaking heat wave, especially in northwest India and Pakistan, is over 100 times more likely than in the past because of climate change.

Dr. Nikos Christidis, a scientist with the Met Office, recently conducted a climate study in India, focusing on estimating the likelihood of the combined April and May temperature reaching a new record in the year 2022 and assessing the relationship between human and climate interaction and if that is changing the likelihood of extreme heat waves. 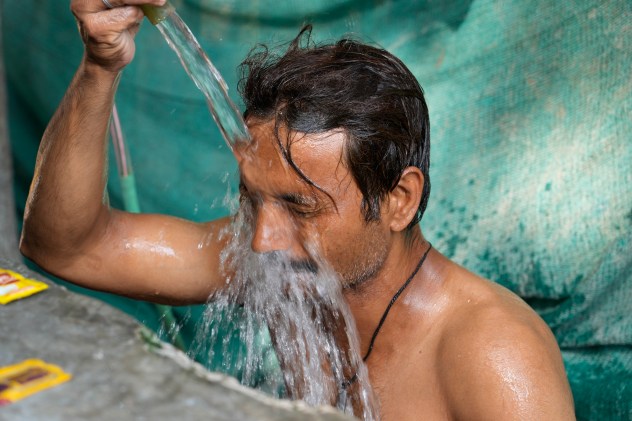 A man bathes at a public water tap during a hot summer afternoon in Lucknow in the central Indian state of Uttar Pradesh, Thursday, April 28, 2022. Severe heat wave conditions are sweeping northern and western parts of India with the maximum temperature soaring to 45 degrees Celsius in some areas. (AP Photo/Rajesh Kumar Singh)

Over the course of the study, researchers compared previous heat waves from April to May from 1900 to 2010. From this comparison, the type of intense heat that's occurred this year would occur only once every 300 years, but when 2010 and 2022 were compared, the likelihood of an extreme April to May heat wave like what's been experienced this year jumped to once every three years. By the end of the century, the likelihood will increase to once every year that a historic heat wave would take place during April and May, according to the researchers' calculations.

“Spells of heat have always been a feature of the region’s pre-monsoon climate during April and May. However, our study shows that climate change is driving the heat intensity of these spells making record-breaking temperatures 100 times more likely,” Dr. Christidis explained. 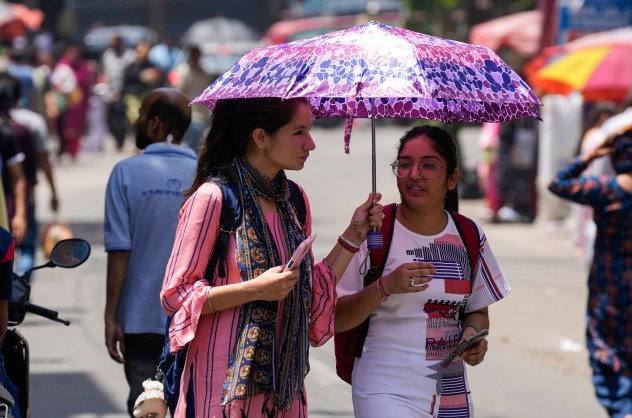 Women use an umbrella to protect themselves from the sun as they walk through a street on a hot summer afternoon in Jammu, India, Sunday, May 15, 2022. Many parts of northwest and central India continued to experience heat wave conditions. (AP Photo/Channi Anand)

The study's release comes during a week when another brutal heat wave has gripped much of India. The heat caused temperatures to flirt with all-time records and a historic bridge to crumble due to excessive heat in Pakistan, leaving many wondering if this is truly the new normal across much of India and Pakistan.

Pakistan and neighboring India have been sweltering amid an intense heat wave that has led to weeks of dangerous air quality and rampaging wildfires. The early-season heat has also been blamed for causing the rapid melt of the Shishper Glacier in northern Pakistan, which led to destructive flooding downstream.

"The Hassanabad Bridge in Pakistan's Hunza Valley was completely destroyed on Saturday as the melting glacier sent torrents of water coursing through area streams in a phenomenon known as a glacial lake outburst flood," AccuWeather Meteorologist Renee Duff explained.

The extreme heat first ramped up late last week, especially for the region surrounding the capital city of New Delhi, home to more than 30 million people. Temperatures in the capital soared into the 110s (above 43 C) last Thursday, May 12.

Temperatures in New Delhi peaked on Sunday when the city experienced its hottest day of the year so far. The mercury topped out at a staggering 116 degrees Fahrenheit (46.7 C) on Sunday at the city's official climate site.

To put this in perspective, the all-time May high-temperature record for any reporting station in New Delhi is 117 degrees F (47.2 C), according to AccuWeather Senior Meteorologist and Lead International Forecaster Jason Nicholls.

This most recent heat wave is the fifth of its kind to occur in the capital city since March, according to the BBC.

The heat has not let up across the capital this week as high temperatures have remained above 100 degrees F (37.8 C). On Thursday, the high in New Delhi reached 112 degrees F (44.4 C) just a few degrees shy of the all-time record for May. 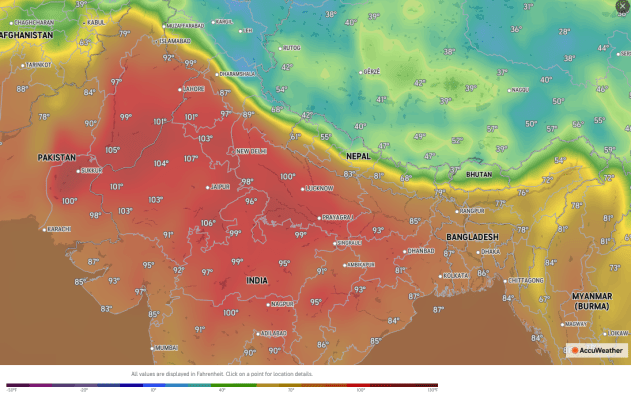 Even as the heat began to ease slightly, temperatures across much of northern India were over 100 F (38 C) on Friday evening, May 20, local time. (AccuWeather)

Amid the scorching heat, one autorickshaw driver in New Delhi found a unique way to keep his passengers cool. Mahendra Kumar is the owner of an autorickshaw that has a living, green roof. The roof is made up of plants that help keep the intense sunlight from radiating the heat straight onto the vehicle's roof. This green rooftop helps to create essentially a "natural air conditioner" for passengers, Kumar told AFP via a translator.

The brief reprieve from the sweltering conditions is thanks to a dip in the jet stream pattern that will allow for a break in the near-record heat. But the break will not last long as temperatures will soar past the 100-degree (37.8 C) mark late this week.

Brutal heat waves pose many impacts, including but not limited to power outages, heatstroke and particularly for the portions of the Indian and Pakistani population that work outdoors or have no access to air conditioning, fatigue and exhaustion are a threat.

"There is too much heat, and if we won't work, what will we eat? For a few days, we work and then we sit idle for a few days because of tiredness and heat," construction worker Yogendra Tundre told Reuters.

Intense heat takes a serious toll on the human body, especially when no relief can be found at night, typically the coolest part of the day.

"It is unlikely there will be any sustained relief from heat waves in the area until the monsoon arrives, which is typically in late June or early July," Nicholls cautioned.