Tankers with water sprinklers were spraying the streets in parts of India on May 15 during a heat wave, while those commuting beat the heat by wearing scarves over their heads.

Another brutal heat wave has much of India in its grasp this week and is causing temperatures to flirt with all-time records. AccuWeather forecasters say a brief break in the heat may be in sight for the nation that has sweltered since March, but it may not stick around for long.

Heat began to ramp up once again late last week, especially for the region surrounding the capital city of New Delhi, home to more than 30 million people. Temperatures for the region in mid-May usually sit in the low 100s Fahrenheit (39-40 Celsius), but beginning last Thursday, temperatures in the capital began to soar into the 110s F (above 43 C).

Temperatures in New Delhi peaked on Sunday when the city experienced its hottest day of the year so far. The mercury topped out at a staggering 116 F (46.7 C) on Sunday at the city's official climate site.

To put this in perspective, the all-time May high temperature record for any reporting station in New Delhi is 117 F (47.2 C), according to AccuWeather Senior Meteorologist and Lead International Forecaster Jason Nicholls.

While the official reporting station fell just short of an all-time heat record on Sunday, it is possible other portions of the sprawling capital city achieved slightly hotter conditions. 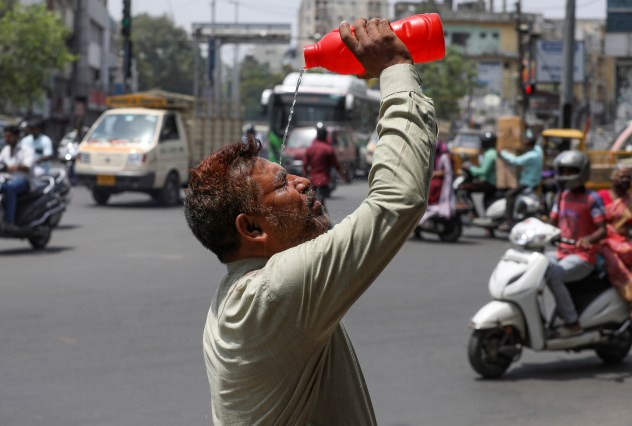 This most recent heat wave is the fifth of its kind to occur in the capital city since March, according to the BBC.

Following a record-breaking March and a searing April, May has continued to be unseasonably hot across much of India. Climate stations in New Delhi and Mumbai have already averaged 4.3 F and 2.3 F (2.39 C and 1.28 C), respectively above normal for the month of May thus far.

March of 2022 was the hottest March for India as a whole since 1901, according to meteorologists from the India Meteorological Department (IMD). When averaged across the entire country, March's average high temperature was an astonishing 3.35 F (1.86 C) above the climatological average.

For two sections of the country, April was yet another record-breaking month. The Director General of the Indian Meteorological Department (IMD), Mrutyunjay Mohaptra, told Reuters that northwestern and central India recorded average max temperatures of 96.6 and 100 F (35.9 and 37.78 C) respectively in April. These values are the highest ever recorded for each region since historical records began in 1900.

In April, there were just two days out of the entire month where the high temperature in New Delhi did not reach or surpass 100 F (38 C).

It was so hot in the northwestern city of Jodhpur that tankers with water sprinklers were deployed to cool off the streets. Temperatures reportedly hit 113 in Jodhpur on Sunday, according to Reuters. Local mayor Kunti Deora told Reuters that "these machines were originally built for controlling pollution by reducing the dust particles in the air. I believe that these will also help us to beat the heat by sprinkling water."

In New Delhi, citizens could be seen wearing head scarves as a way to take some shelter from the scorching sun.

During stretches of brutal heat, it is often portions of the population that work outdoors or have no access to air conditioning that experience the worst effects Mother Nature has to offer.

"There is too much heat, and if we won't work, what will we eat? For a few days, we work and then we sit idle for a few days because of tiredness and heat," construction worker Yogendra Tundre told Reuters.

Tundre works at a construction site on the outskirts of New Delhi with his wife Lata.

"Because of heat, sometimes I don't go to work. I take days off .. many times, fall sick from dehydration and then require glucose bottles (intravenous fluids)," Lata said.

Being unable to work due to the heat means missing out on crucial income for workers in poverty like the Tundres. A day of work can make the difference between putting food on the table or going hungry.

Intense heat takes a serious toll on the human body, especially when no relief can be found at night, the coolest part of the day. In the western state of Maharashtra, there have already been at least 25 deaths related to heat stroke this year, the most in six years, according to the Times of India.

Avikal Somvanshi, an urban environment researcher from India's Centre for Science and Environment told Reuters that federal government data showed that heat stress was the most common cause of death in the country, after lightning, from forces of nature in the last 20 years. 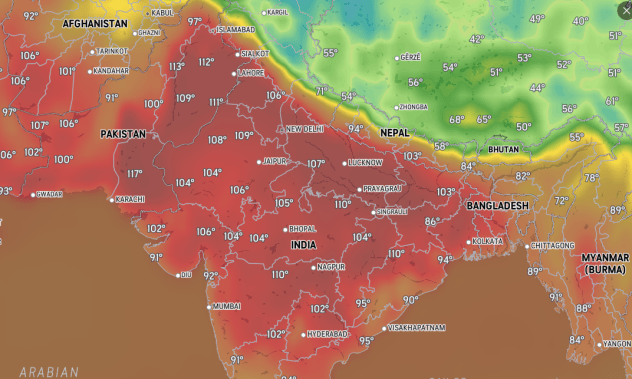 Even as heat began to ease slightly, temperatures across much of northern and central India were well over 100 F (38 C) on Tuesday afternoon, local time. (AccuWeather)

Air quality is another factor that piles onto the population's general risk during heat waves.

Even as the sun set on Monday night, local time, the air quality in New Delhi was at a level classified as "very unhealthy." At this level, even healthy individuals are likely to experience breathing issues, according to PlumeLabs, a company acquired by AccuWeather this year.

A shift in the weather pattern at the upper levels of the atmosphere will bring at least a short window of relief to the sizzling nation this week, forecasters say. 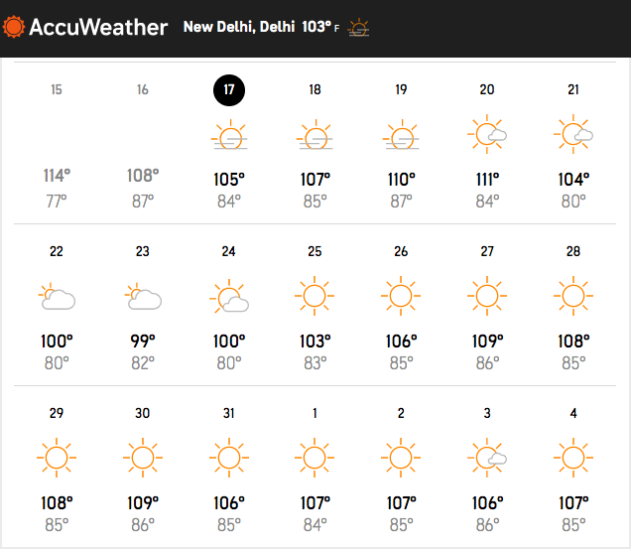 The AccuWeather forecast for New Delhi over the coming weeks shows excessive heat sticking around in the city. (AccuWeather)

Heat will be kept at bay through at least Wednesday for many, according to Nicholls.

However, excessive warmth is set to spike again come Thursday and Friday. Temperatures in New Delhi will once again rise to 110 F (43 C) and settle into the low 110s F (43-45 C) each day.

"It is unlikely there will be any sustained relief from heat waves in the area until the monsoon arrives, which is typically in late June or early July," Nicholls cautioned.