Two colossal mountains -- and potentially extreme weather -- stand between Erin Parisi and her quest of being the first transgender person to complete one of the most difficult mountaineering challenges on Earth. 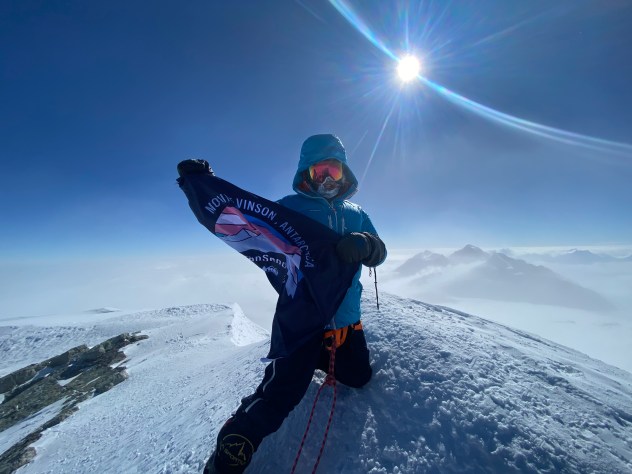 It was the day after Christmas, and Erin Parisi was in one of the most remote corners of the world, thousands of miles away from home in Colorado. The sun was beaming over a snow-covered landscape, and Parisi stood proud at the summit of Vinson Massif, the tallest mountain in Antarctica.

The excursion was the latest leg in Parisi's quest to complete the Seven Summits, a mountaineering challenge that involves standing on the top of the tallest mountain on all seven continents.

Richard Bass was the first person to complete this momentous achievement in 1985, and since then, around 500 people have followed in his footsteps, according to NPR. Parisi is well on her way to joining this exclusive list of people, carrying a pink, white and blue flag with her during most of her journeys.

"Antarctica was no easy feat," Parisi, 45, told AccuWeather in an interview. "You get sunburned and windburn and frostbite kind of all at the same time. It always kind of feels like it's snowing because the wind is picking up what's on the ground and just kind of whipping it across your face."

Despite Antarctica’s harsh weather conditions, Parisi was able to conquer Vinson Massif, a peak that rises to an elevation of more than 16,000 feet above sea level. Now, standing between her and the prestigious accomplishment of completing the Seven Summits are just two mountains known for brutal weather: Denali in Alaska and Mount Everest along the border of Nepal and China.

First up is a rematch with Denali before a final face-off with Everest.

"During these expeditions, I faced a lot of weird weather."
Erin Parisi

Since starting the challenge in 2018, Parisi has summited Mount Kosciuszko in Australia, Mount Kilimanjaro in Africa, Mount Elbrus in Europe, Mount Aconcagua in South America and Vinson Massif in Antarctica.

"During these expeditions, I faced a lot of weird weather," Parisi said.

Parisi summited Kilimanjaro during Africa’s rainy season and battled a leaking tent and wet weather on a daily basis. Across the world in Australia, swampy conditions around Kosciuszko were a breeding ground for black flies and big mosquitoes that seemed immune to bug spray.

However, the most extreme conditions she has faced during the challenge occurred in 2021 during her first attempt at summiting Denali in Alaska, a remote mountain that jets more than 20,000 feet into the sky.

Part of the way up the mountain, the weather turned for the worse.

"We just got pinned with wind and [got] stuck," Parisi said. "We couldn't move forward, couldn't move back at times and then we weren't able to fly out." Riding out storms in a tiny tent is when mental endurance can prove to be just as important as physical endurance.

Ultimately, Parisi and the rest of the people on the expedition had to turn around and head down the mountain when the weather finally cleared.

Parisi is planning to return to Denali this year for another summit push. If successful, she will have just one mountain remaining in the Seven Summit challenge, Mount Everest, with a possible summit attempt as early as spring 2023.

For Parisi, the Seven Summits challenge is about more than just climbing mountains.

Parisi said that she lost people in her life after her transition, including some in the climbing community, and that attempting the Seven Summits was initially far from something she would consider attempting.

"So when I committed to doing one of these summits, seven summits at a time, it really was kind of a step for me to really prove to myself that I could find safety in the world again and in these environments that I had sought before," Parisi explained. 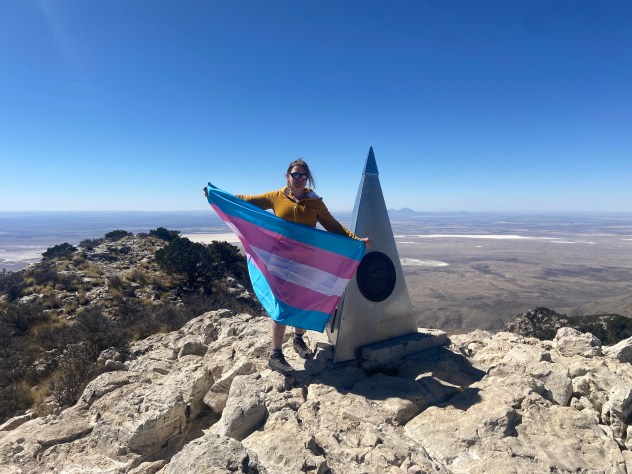 Erin Parisi holding a transgender pride flag at the summit of Guadalupe Peak, Texas, the highest point in the state. (Erin Parisi)

Climbing the tallest mountain on every continent also means braving societies around the globe that are unsafe for transgender people.

After reaching a summit, Parisi often poses with the trans pride flag. However, her victory at Mt. Elbrus in Russia looked a bit different. Instead of raising the flag, she made a "T" symbol with her hands at the summit of Europe's tallest mountain. Displaying the rainbow pride flag is a crime in Russia, so she did not want to take any chances with a trans pride flag.

"I'm just trying to climb high mountains like anyone else," she added. 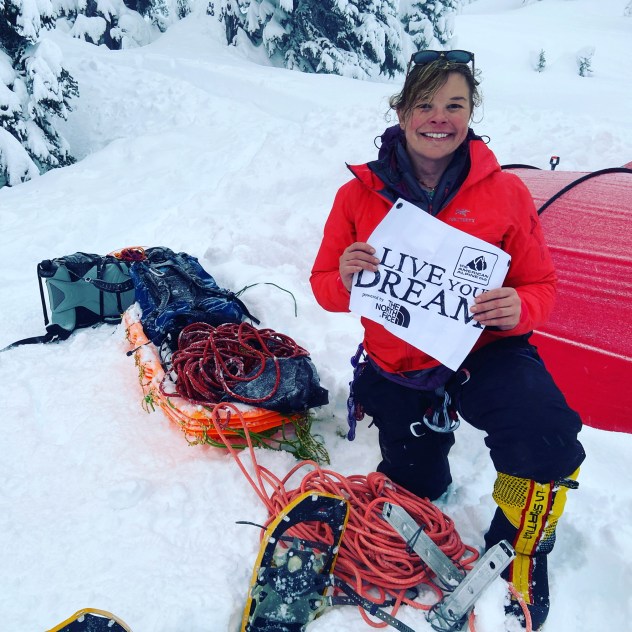 Parisi is also hoping that by completing the Seven Summits, her story will help to inspire others to put themselves out there and do the things that they love.

"I'm excited to not only personally overcome the kind of the fear that came early on in transition, but also help others that might find themselves feeling alone and like they can't be themselves," Parisi said.

"If you're any sort of person and a marginalized population, it's easy to see all of the negative that gets bombed on you," she added. "You've got to find a way to feel confident in yourself and kind of drown out those voices."

Parisi said that one of her keys to success has been surrounding herself with people who believed in her and supported her when she needed it most.

"Whatever you're going through," Parisi said, "don't focus on all the people that tell you you can't do it and figure out a way to tell yourself you can and get up there and do it."