Temperatures across the southwestern United States could set new daily records through midweek, contributing to an elevated wildfire risk across the region.

Experts at Climate Central say the frequency of fire weather days has dramatically increased in parts of Texas, Washington, Oregon and California since 1973.

For weeks, the Southwest has been gripped by extreme drought, rapidly spreading wildfires and surges of heat. AccuWeather forecasters say that this trend will continue with the temperatures in some cities possibly approaching record territory.

Across the Southwest, the fire season is already off to an active start. Earlier this month, destructive wildfires raged from Texas to Arizona, some of which are still active fires. The Hermits Peak Fire, which started in New Mexico when crews lost control of a prescribed burn, was only 42% contained with over 311,100 acres lost as of Wednesday morning. Farther south in the state, the Black Fire was only 13% contained with over 160,900 acres burned as of Wednesday morning. 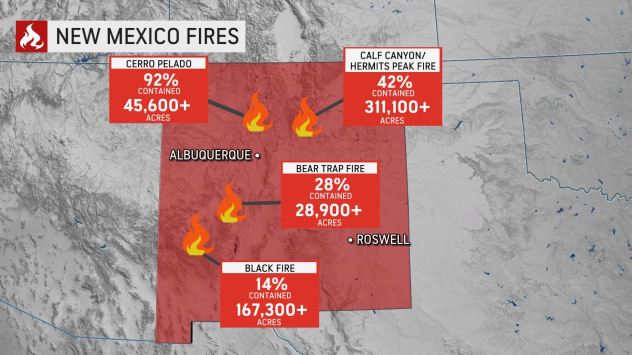 Active fires are also continuing in Arizona. The Tunnel Fire, located just north of Flagstaff, Arizona, has burned nearly 20,000 acres, but it is 98% contained as of Tuesday morning.

This past weekend, calm and cool weather helped fire crews battle the blazes across the Southwest. A bulge in the jet stream over the East Coast created a bottleneck in the atmosphere, sending temperatures surging in the East but allowing for cooler-than-normal weather for much of the rest of the country, even allowing for a late-season snowstorm in Colorado and Wyoming. However, forecasters say that a change in this pattern is already taking place.

"As a cooler air mass slides into the eastern half of the country, this will open the door for heat to continue building in the Southwest," said AccuWeather Meteorologist Matt Benz. 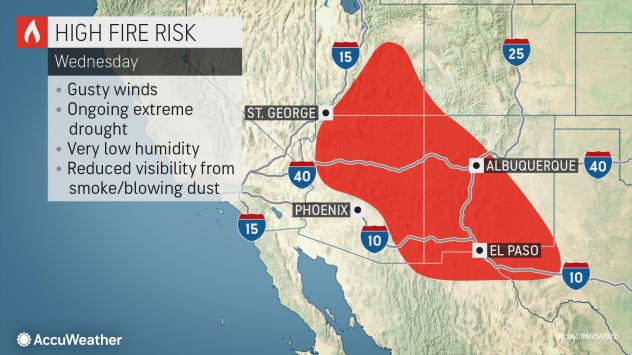 As higher temperatures take hold in the Southwest, a disturbance sliding into the Plains will sustain an uptick in winds across parts of the Southwest, helping to provide conditions favorable for the spread of wildfires. While this disturbance is bringing flooding rain to areas farther east, little to no rain is expected in most of the Southwest, a familiar pattern that has continued to build the ongoing drought in the area.

"The combination of wind and very low humidity will cause this dangerous fire weather setup.", Benz explained.

The gusty winds and fire risk will continue through Wednesday before winds finally subside. Gusts as high as 50 mph will be possible, especially at higher elevations and in mountain passes.

Meanwhile, winds in California will remain light through the first half of the week, keeping the wildfire risk at bay. A brush fire occurred Monday on the Pomona Freeway westbound in Diamond Bar, California, but was 100 percent contained as of 3 p.m. PDT after burning through 1.7 acres. No injuries or structural damage was reported from the fire. 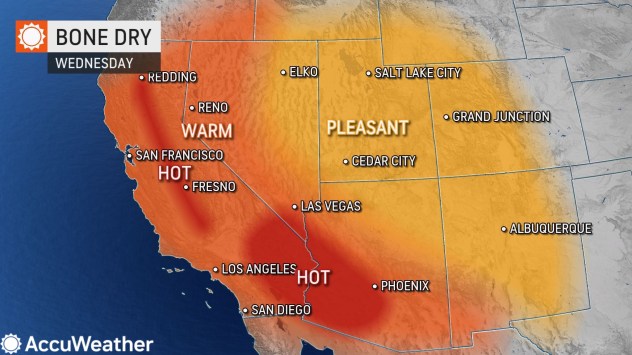 The record-threatening temperatures will began in California's Sacramento and San Joaquin valleys on Tuesday. In Sacramento, California, an observation from the Sacramento International Airport recorded a temperature of 100 F at 3:42 p.m. PDT, which tied the daily record of 100 F, set in 1982.

The mercury will continue to climb heading into Wednesday when the heat wave is expected to peak. Forecasts for Sacramento on Wednesday are set to topple another daily record, with temperatures forecasted to go to 104 F, which would break the record of 100 F set in 1951.

Farther south, a daily record that has stood for more than a century is in jeopardy. In Fresno, California, the temperature could reach or potentially even exceed the daily record of 102 F on Wednesday, which was set in 1890. Records could also fall in Redding, California, with a high in the triple digits flirting with the record of 103 F set in 1982.

The ongoing drought in the Southwest will only increase the severity of the expected heat. According to the U.S. Drought Monitor, nearly 60% of California is in a severe drought, with over 95% under at least a moderate drought.

Farther east, over 36% of New Mexico is under an exceptional drought, the most severe category. As AccuWeather forecasters have noted in the past, a completely dry ground can add several degrees to the high temperature on a given day. 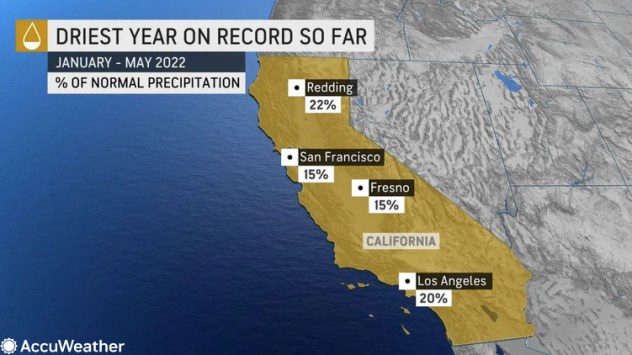 The worst heat is expected to subside by the end of the week as the bulge in the jet stream responsible for the heat weakens and slides eastward.