The state underwent a winterlike transformation through Saturday morning, creating a distant memory of temperatures in the 80s and 90s.

Just days after parts of Colorado experienced temperatures in the 80s, AccuWeather's Tony Laubach temporarily put away the shorts and reported live on the late-season snowfall.

It's been two days since AccuWeather RealFeel® Temperatures were in the 90-degree range in many parts of Colorado, including the Denver metro area, but the late-spring surge of warmth now seems like a distant memory in the state.

As of Saturday morning, locales across the state were covered in snow, receiving more than a foot of snow amid plummeting temperatures that sent the clock backwards to winter for the state's residents. High snowfall totals, according to the National Weather Service, were found in Cripple Creek, Colorado, (20 inches of snow through 6:45 a.m. MDT Saturday) as well as Woodland Park, Colorado, (16 inches as of 7 a.m. MDT) and Whiskey Park, Colorado, (15 inches as of 7 p.m. MDT Friday evening).

The winterlike conditions began in the Mile High City of Denver on Thursday evening, when a temperature drop found the city going from 85 F at 6:53 p.m. MDT Thursday, to 59 F just one hour later. Though the 46-mph wind gusts disappeared after Thursday, the severe snowfall picked up the outlier weather in the region. Snapshots taken from a video in Bennett, Colorado, shows the storm picking up momentum through the region on Friday, part of the sudden climate shift in the state. 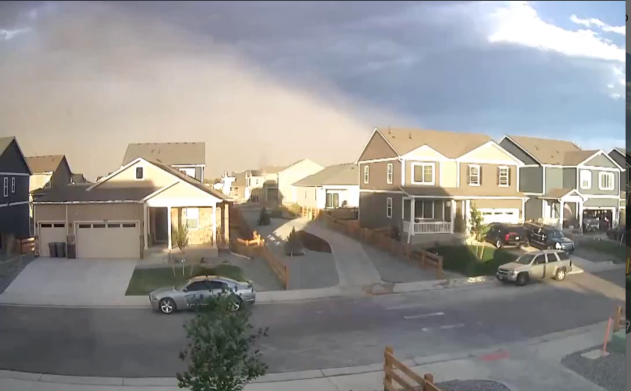 Snowfall reports in the Denver area have been varied thus far, with 1 inch of snow reported at Denver International Airport, but suburbs west and south of downtown Denver saw reports of 3-6 inches of slushy, wet snow as of early Saturday. In Colorado Springs, Colorado, a general 4-7 inches of snow has fallen as part of the storm.

Snow began trickling in during Friday afternoon, creating a nice view from this Lafayette, Colorado, home:

Thursday in Colorado began rather peacefully, as is evident by this shot from Lakewood, Colorado, making the storm's arrival that much more jarring for the state's residents.

US drought patterns over the past 20 years revealed