Waves crashed onto the shores of Ireland and England as the Storm Barra brought powerful winds and heavy rain to the area on Dec. 7.

The second named windstorm in less than two weeks reached bomb cyclone status prior to striking portions of Ireland and the United Kingdom with a fury Tuesday into Wednesday. Tens of thousands of residents were left without power as hurricane-force winds churned up massive waves, while pelting rain and snow led to difficult travel and disruptions to daily life.

The storm, dubbed Storm Barra by Ireland's national weather service, turned deadly on Tuesday afternoon after the body of an 80-year-old woman was recovered in a flooded river in Blandford, England, according to The Independent. 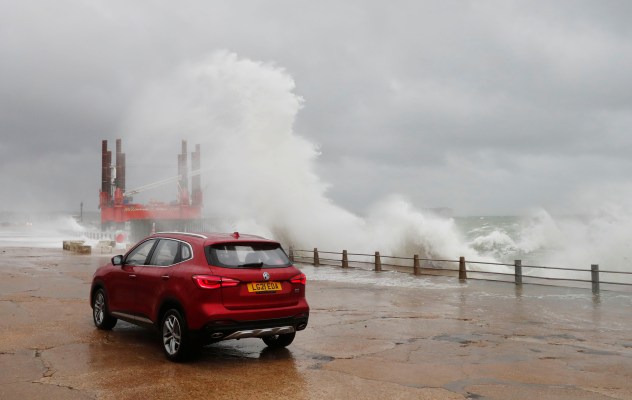 In Wales, strong winds left a school severely damaged after part of the roof was blown off. Fortunately, no one was injured as the building was largely empty at the time, The Independent reported. Scottish and Southern Electricity Networks (SSEN) restored power to more than 8,000 customers by Wednesday morning, with 1,000 customers still awaiting power restoration. By Wednesday evening, all power had been restored in Scotland, according to BBC.

The new power cuts came just days after homes left without electricity by deadly Storm Arwen in late November were finally reconnected to the grid.

Ireland endured some of the most intense weather unleashed by Storm Barra, where the country's national weather service, Met Éireann, issued a rare red warning for a few counties. A red warning is implemented for "very dangerous weather conditions from intense meteorological phenomena."

The #Meteosat11 🛰️, operated by our European partners @EUMETSAT, is monitoring a large "bomb cyclone" bringing dangerous weather conditions across Ireland and the UK. The system, known locally as Storm #Barra, has produced 90+ mph wind gusts across parts of Ireland. pic.twitter.com/BYqmncGOWo

In the case of Storm Barra, the pressure dropped from around 1,006 millibars on Monday morning to 956 millibars 24 hours later, according to surface weather analysis by the National Oceanic and Atmospheric Administration's Ocean Prediction Center. This was more than double the pressure drop needed to be classified as a bomb cyclone. The rapid strengthening of Storm Barra manifested itself on the ground in the form of angry seas, high winds and intense precipitation.

Flights throughout the region were affected, and those traveling on the ground had to dodge flooded roadways, downed trees and power lines and even snowy conditions in the highest terrain. Planes that attempted to touch down in the storm were seen on video making harrowing landings amid strong crosswinds. 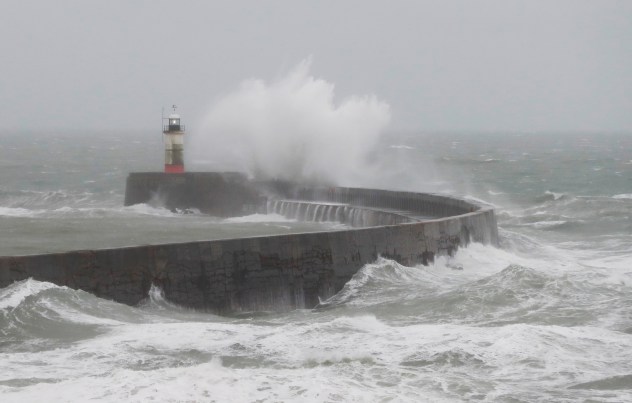 The Christmas Market in Belfast was closed on Tuesday due to the severe weather conditions, and schools were closed in 12 counties across Ireland, according to BBC. Schools across the country resumed normal operations on Thursday following the closures, The Irish Times reported.

Sherkin Island in Cork County, Ireland, reported a wind gust of 84 mph (135 km/h), with gusts in excess of 70 mph (113 km/h) clocked in Galway, Kerry and Donegal counties. Power outages stood at approximately 59,000 customers across the Republic of Ireland on Wednesday morning, the BBC reported. Power had been restored to a majority of households by Wednesday night, but 13,000 homes and businesses still remained in the dark.

Storm Barra captured by the Irish Lights team on Fastnet. Safety is paramount, especially during challenging weather conditions, as our team of attendants and technicians, with expertise in electronics, electrics and mechanics, are completing essential maintenance #StormBarra pic.twitter.com/yKX18VTSC1

Over solid ground, Storm Barra's strong winds caused trees to come tumbling down and even tossed around an unsecured trampoline like a toy. The national police service of the Republic of Ireland posted a picture on Twitter of a trampoline twisted around power lines, with the agency urging the public to properly secure any items left outside during the storm.

And that wasn't the only trampoline that tried to make it airborne. In the southwestern Irish town of Bantry, two sisters had a tug-of-war match with Storm Barra's winds as they attempted to keep their trampoline from being yanked over a fence.

Clean-up and power restoration efforts may be briefly disrupted by another bout of wet and windy weather into Friday, but forecasters do not expect another significant storm.

Despite back-to-back blows from named windstorms, AccuWeather meteorologists predict Ireland and the United Kingdom will have fewer windstorm impacts than their southern counterparts throughout this winter.