Two homes were carried away as powerful floodwaters gushed through the Indonesian island of Lombok on Dec. 6.

Intense flooding and landslides swept across the Indonesian island of Lombok, known for its famous surfing spots. Dramatic footage captured on Monday caught the moment two homes were washed away by an overflowing river in the western part of the island. The houses, one after another, can be seen crashing into a bridge and getting crushed by the force of water against the structure.

The devastating flooding and landslides affected more than 400 families, according to a press release from the ASEAN Disaster Information Network.

Rainfall since January has been well above average across much of Indonesia. From Oct. 1 to Dec. 6 alone, rainfall in Indonesia has been 150-300% of normal, and rain chances aren't coming to an end anytime soon, according to AccuWeather forecasters. Torrential rainfall on top of an already saturated ground can enhance the flood potential.

"The pattern that has favored above-normal rainfall across Indonesia since the summer can be tied to two things: A weak negative Indian Ocean Dipole (IOD) from July into October and La Niña conditions," Jason Nicholls, AccuWeather lead international forecaster and senior meteorologist, said. 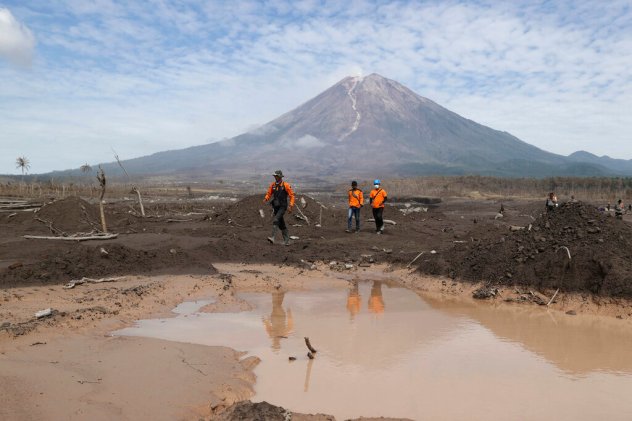 Rescuers walk on an area affected by the eruption of Mount Semeru, background, during a search for victims in Lumajang, East Java, Indonesia, Wednesday, Dec. 8, 2021. Heavy rains and torrents of hot lava and mud sliding down the erupting volcano Java island have put search and rescue operations for more than a dozen missing on hold, officials said Wednesday. (AP Photo/Trisnadi)

The climate in Lombok, Indonesia, is tropical. It is hot year-round, and the rainy season typically lasts from November to March, with the dry season occurring from June to September. In Mataram, the largest city in Lombok on the west coast, on average, 59.6 inches of rainfall occurs throughout the year, with a maximum of rainfall from December to February. Exclusively, in December, Mataram receives 9.6 inches of rain, on average.

Rain chances will continue throughout the next seven days in Lombok, according to AccuWeather forecasters.

The heavy rain isn't just affecting places in Lombok. In Java, heavy rain showers and thunderstorms are believed to be the initial cause of the deadly volcanic eruption on Saturday, Dec. 4.

"Thunderstorms and days of rain, which eroded and finally collapsed the lava dome atop the 12,060-foot Semeru, triggered the eruption," Eko Budi, who heads the Gambar Center for Geological Survey, said, according to reporting from The New York Times. Rain showers and thunderstorms have also hampered recovery efforts from the devastating eruption.