From above, the wintry spectacle appears almost mesmerizing. And wait till you find out what's going on down on the ice -- inside the circle.

Inventor Janne Kapylehto and his friends carved into the ice on a frozen lake in Sammati, Finland, on Dec. 4, to build what he calls the 'world's biggest rotating ice donut'.

A group of friends in Finland set out on a wintry mission early this month -- to create the "world's largest rotating ice donut."

The ice donut was conceived by inventor Janne Käpylehto and cut into the ice of a frozen lake by him and his friends on Dec. 4. When it was finished, it was a whopping 340 feet in diameter and made for a remarkable spectacle when spotted from the air by a drone camera. Better still, with the help of electric motors, the giant ice donut rotates around a small island in the frozen lake in Sammati, Finland.

Cutting the donut was a challenge, Käpylehto said, because if it is not measured and cut to precise specifications, it would not be a perfect circle, meaning it wouldn't be able to spin. And having the ability to spin is what makes an ice donut really awesome. Once it was completed, Käpylehto and his friends held a barbecue and put a sauna on the ice to celebrate the achievement.

"This will be rotating today and on the donut, which is rotating all around the island, there will be a sauna, a barbecue and a party," he said. "So, if you fly, you are welcome to come here today."

Finland's climate in the winter months makes it a prime location for creating an ice donut. AccuWeather Senior Meteorologist Paul Walker explained that normal temperatures for Helsinki, Finland, around this time of year are highs of 33 degrees F and lows of 25 F. Sammati is in southern Finland, about 45 miles west of Helsinki, the nation's capital.

However, a large dome of high pressure over western Russia has brought even colder weather in Finland recently, with temperatures staying below freezing every day since Nov. 27. Walker said this trend is expected to continue through Friday. 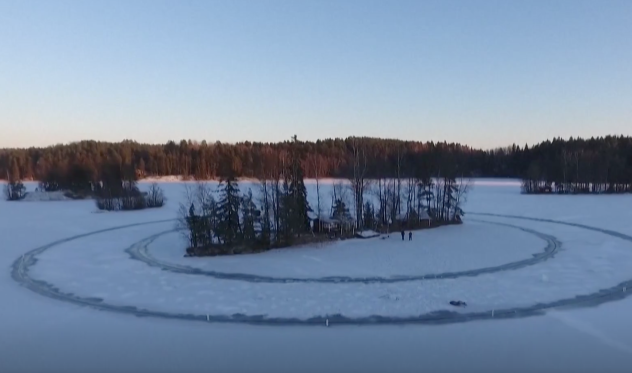 The ice donut created by Janne Kapylehto and his friends on Dec. 4 has a diameter of 104 meters, or about 340 feet, and spins using a motor. (AFP)

The giant ice donut may be a sight unlike any other for many people, but this is not the first spinning ice Kapylehto has created. In 2017, he used a chainsaw to carve an ice carousel, missing the cutout in the center that the newly created ice donut has, on the frozen Lake Lohja, located in South Finland.

The 2017 ice donut rotated with the help of a solar-powered motor. At the time, Käpylehto told Business Insider that he hopes to one day make a 50-meter ice carousel -- meaning he was able to more than double that goal this year with his 340-foot, or 104-meter, ice donut.

Käpylehto's cold creation calls to mind the wintry stylings of a Canadian man who has used the snow and ice as a canvas to display art in his backyard.

Bob Greenfield of Toronto initially went viral in 2019 for creating designs out of snow, some of which included a version of the Mona Lisa, on his family's backyard hockey rink. Earlier this year, he created a 30-foot crossword puzzle with 78 words on the rink.

Käpylehto has also been busy with his icy creations this year. In February, he made another ice carousel, which broke the record for world's largest ice carousel with a diameter of 300 meters -- about 984 feet. The record was previously held by Käpylehto's friend Chuck Zwilling from Minnesota for his ice carousel that had a diameter of 228 meters, or close to 750 feet.

Prior to breaking his friend's record in February, Käpylehto said, he had made the world's largest ice carousel four times.