A late-autumn severe weather outbreak unleashed heavy rain, gusty winds, hail and even tornadoes across the Tennessee Valley from Sunday into Monday that resulted in destroyed property and several injuries.

Some of the worst damage happened in the small community of Stamping Ground, Kentucky, after a tornado tore through the region early Monday, giving some residents a frightening wake-up call.

"I just woke up to...a boom and being thrown uncontrollably, just rolling and just flipping over... didn't know what was happening," Travis Fields, a resident of Stamping Ground, told Live Storms Media, adding that amid the chaos of the twister, he thought he "might be dying."

"I didn't really know what it was," Fields said.

Once he was able to get his bearings, Fields immediately began searching and yelling for his fiancée, but he didn't hear an answer. Fields continued to scream for her until his fiancée was finally able to alert him that she was stuck in the rubble. Fields said he was then able to dig her out to safety.

The National Weather Service (NWS) office of Louisville, Kentucky, conducted a preliminary damage survey and determined that what blew through Stamping Ground on Monday morning was an EF1 tornado. This same tornado caused damage to multiple trees, outbuildings and other mobile homes, injuring two. 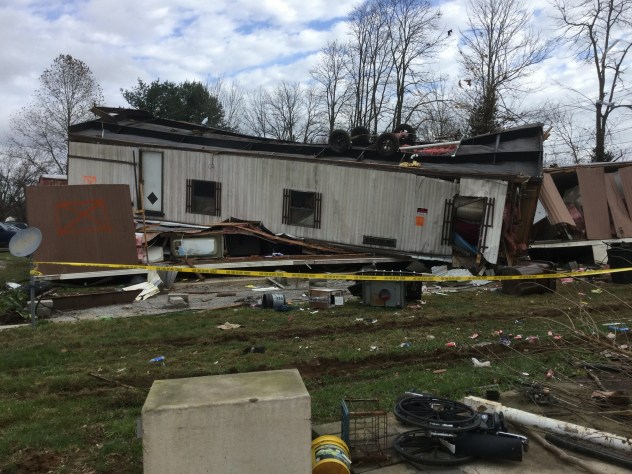 The NWS said the tornado touched down just south of the Parkers Mobile Home Park in Stamping Ground, which is about 20 miles northwest of Lexington. The twister's wind speeds were initially around 80 to 85 mph, but peak winds eventually reached 95 mph as the tornado grew to a width of 60 yards.

Trailers in the mobile home park were lifted off their foundation, and some were flipped over and or turned in a different direction, the NWS damage report said. "Insulation and metal siding from the trailers were thrown up into the trees. Deck pieces were thrown and impaled into the ground, trees were twisted and snapped, and numerous air conditioner units were thrown several feet," the NWS said.

At least one other tornado that struck Kentucky Monday morning was designated as an EF0 that traveled over 5 miles across southwestern Graves County, damaging trees and barns. On Monday morning, about 13,000 were without power across the state of Kentucky. Several hours before, on Sunday night, an EF1 tornado traveled across West Frankfort, Illinois, causing damage to businesses, homes and trees, and leaving over 2,000 people without power.

A third tornado, which was rated as an EF1, touched down in Highlandville, Missouri, Sunday night, blasting a pool house off its foundation, heavily damaging several outbuildings and uprooting numerous trees during a five-minute rampage.

As severe weather continued Monday night from Kentucky to Louisiana, two more preliminary tornado report reports were filed, including one near Lynchburg, Tennessee. That twister was determined to be another EF1 tornado. Across the state, over 3,000 were still without power early Tuesday morning, according to PowerOutage.us. Farther southwest, a 911 call was received to report large trees down in Slagle, Louisiana, and NWS meteorologists said that radar imagery indicated this was likely due to a tornado.

WATCH: A school bus driver in Tenessee was getting ready when strong winds flipped the bus and lifted a large camper onto the top of it

"It's unbelievable," Trousdale County School District Superintendent of Schools Clint Satterfield said, according to WSMV. "It looks like he was playing with a Matchbox set. It looked like he turned the bus over on its sides and then took up the camper and put it on top."

Another EF1 twister was confirmed on Tuesday, touching down near Elkton, Kentucky, early in the morning on Monday. This tornado damaged barns and houses and was on the ground for 8.3 miles, the NWS said.

Damaging winds roared through Kentucky, Tennessee, Alabama, Mississippi, Illinois and Oklahoma throughout the past few days, with gusts topping out at about 65 mph. Quarter-sized and pea-sized hail fell across Tennessee, Arkansas, Kentucky, Oklahoma and Missouri.

"Following several days of nasty storms, at least a brief period of quieter weather is in store for the Tennessee Valley," said AccuWeather Meteorologist Mary Gilbert.

Watch live here: AccuWeather NOW
Officer was first on scene of one of the worst traffic accidents in US history
Scientists were first who dared to forecast 'an act of God'