Heavy rain led to floods and mudslides throughout Hawaii on Dec. 6, while blizzard conditions struck some of the island summits.

Hawaii has looked like anything but a tropical oasis this week.

The archipelago has been socked by a potent storm that has unleashed pounding rainfall, high winds and even blizzard conditions to the mountain summits. The state’s Big Island has taken some of the worst impacts thanks to “catastrophic flooding” after 2 feet of rain fell in some areas.

According to the National Weather Service office in Honolulu, the locations of Nene Cabin and Keaumo in Hawaii County received the biggest amounts of rainfall in the state. On Monday, the rain grew so intense that Hawaii Gov. David Ige declared a state of emergency in anticipation of the potential flooding damage to public and private property.

The rush of floodwaters also necessitated the rescuing of five young boys from the rapid waters of a creek, The Associated Press reported. The boys, ages 9 and 10, were rescued by the Honolulu Fire Department out of the Palolo Stream on Monday after they were swept away by stormwaters while playing after school. 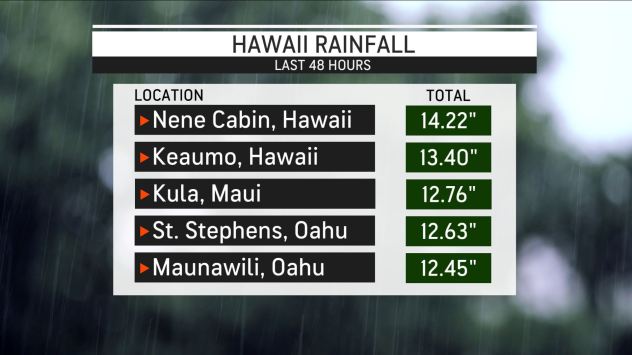 Some of the top rainfall reports in Hawaii as of Tuesday morning, Dec. 7, 2021.

Later in the night, more rescues were required for stranded residents in the Nuuanu Stream after a 911 caller reported multiple people struggling to get out of the rushing waters near the Pali Highway, the Star-Advertiser reported.

Far above those flooding rains, heavy snow has blanketed the Big Island's tallest mountains, notably sparking a blizzard warning that ran through Monday morning. According to the NWS, totals of 8 inches of snow were reported on the roads near the dormant volcano Mauna Kea, the highest peak in the state.

Although vacationers don't think of Hawaii for its snow, blizzard warnings aren't uncommon for the volcanic peak, as the last warning for the summit was issued in 2018. On top of the weekend's heavy snow, wind gusts of nearly 90 mph were also recorded at the peak, the equivalent of a Category 1 hurricane.

This time-lapse video captures the summit of Mauna Kea, Hawaii, getting hit with snow. The National Weather Service warned of blizzard conditions with winds gusting over 100 mph and 12 inches of snow.

The catalyst behind the week of quirky weather was a storm system known as a Kona low. According to AccuWeather forecasters, Kona lows are storms that change the wind direction near Hawaii and bring heavy rain to areas that don't typically receive high amounts of precipitation.

On top of the unsavory precipitation totals, the state's capital city of Honolulu has also dealt with abnormally cold conditions in recent days, including a record low of 56 degrees Fahrenheit on Saturday. 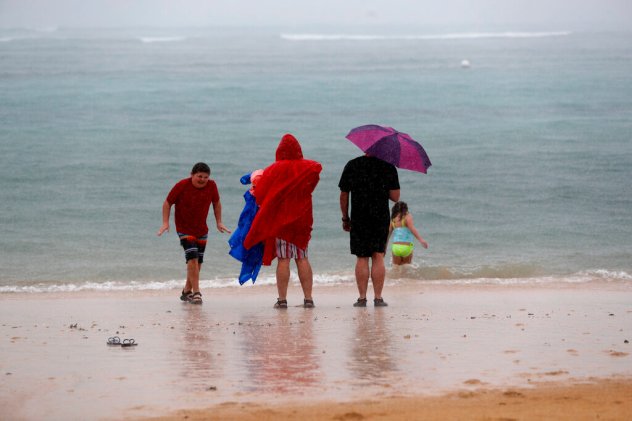 According to AccuWeather Meteorologist Jessica Storm, Honolulu has already reported over 93 times more rain in the first week of December than it did in all of November.

"Aside from the flooding rain, cities such as Honolulu have experienced quite chilly conditions compared to average and have even set record lows," Storm added. "The Big Pineapple typically doesn't stray too far from its average temperatures, which remain in the lower 80s Fahrenheit in the day and around 70 degrees at night."

The stormy conditions also left thousands of customers on the islands without power. As of Tuesday evening, over 4,000 residents were still in the dark, according to PowerOutage.us.

AccuWeather Senior Meteorologist Michael LeSeney added that the Kona low will shift westward as the week progresses, with the heavy rain being isolated to certain islands by midweek.

"By the second half of the week, the typical trade wind pattern should return to the Hawaiian Islands," LeSeney said.