Multiple rounds of severe weather will target the northern Plains and Appalachians, increasing the chance for power outages and damaging wind gusts.

The risk of violent thunderstorms continued Wednesday along a 2,000-mile-long zone from portions of Montana to the Carolinas, with flash flood warnings issued in locations where heavy downpours could unfold over potentially days, AccuWeather meteorologists warn.

"Storms will continue to fire and turn severe along the northern and eastern rim of a dome of heat anchored over the south-central United States through Thursday," AccuWeather Chief On-Air Meteorologist Bernie Rayno said. "This effect is often called a ring of fire and can cause some places to be hit by storms multiple times per day and/or day after day." 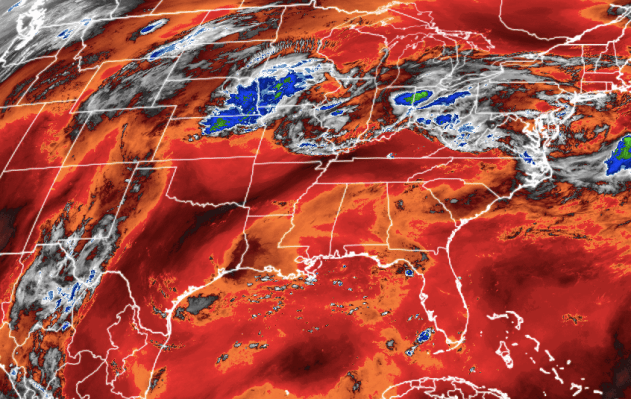 In this water vapor image from Wednesday morning, July 6, 2022, the moistest areas are depicted as shades of blue and green, while the driest air is revealed as shades of red. (GOES-East/NOAA).

A powerful derecho that produced wind gusts close to 100 mph roared from South Dakota to Iowa on Tuesday. A derecho is a fast-moving cluster of severe thunderstorms that produces consistent or intermittent damaging winds over a distance of at least 400 miles with a width of at least 60 miles, according to the National Weather Service's Storm Prediction Center (SPC). The derecho that extended from northwestern South Dakota to eastern Iowa from Tuesday midday to Tuesday night covered a distance of approximately 500 miles.

Other clusters of severe thunderstorms occurred from the northern Plains to the Midwest, southern Appalachians and Chesapeake Bay region into Tuesday night. All told, there were more than 280 reports of severe weather ranging from high winds to large hail and isolated tornadoes, according to the SPC.

"While the risk of a powerhouse complex such as a derecho is somewhat lower through Thursday, the likelihood of severe thunderstorm complexes that can travel for dozens of miles will persist into Thursday," AccuWeather Meteorologist Alex DaSilva said.

The clusters of severe storms will still carry the potential for damaging winds, large hail and frequent lightning strikes. As with many severe thunderstorms, there will be a risk of an isolated, short-lived tornado as well.

While any location from the central and northern Rockies to the southeastern United States coast will be at risk for an isolated severe thunderstorm through Thursday night, there are some locations where a greater concentration of severe thunderstorms is more likely. 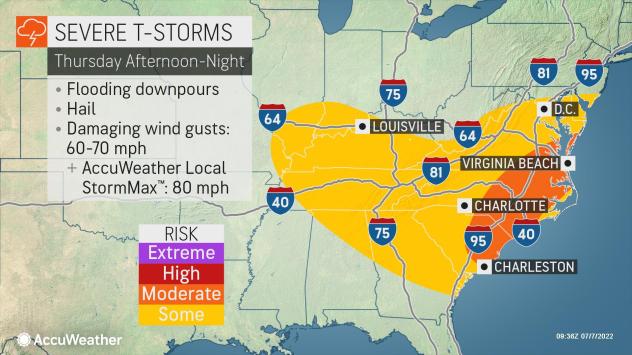 As storms powered through southwestern Ohio, including the Cincinnati area on Wednesday afternoon, winds gusted to over 60 mph, and a destructive tornado triggered thousands of power outages and caused a state of emergency in the town of Goshen.

Severe thunderstorms will focus on portions as far west as Montana on Thursday and as far east as portions of the Carolinas, AccuWeather meteorologists say. 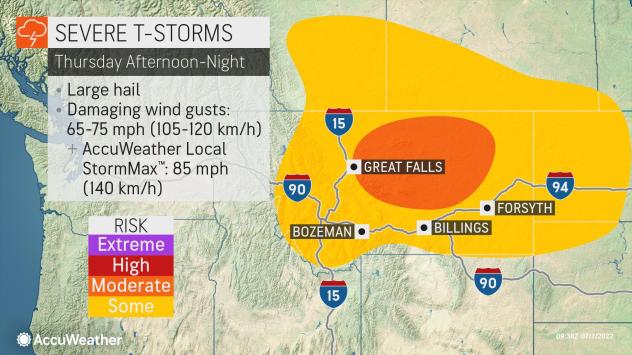 The potential for flash flooding could become the most significant concern, even as the storms generate strong winds, hail and lightning.

"The main risk to lives and property from through Thursday night may stem from flash flooding," DaSilva said. "The repeating and slow-moving nature of some of the storms will be a major player in producing excessive rain in some communities."

"Days of downpours will continue for much of the rest of the week from the eastern slopes of the northern Rockies to parts of the northern and central Plains, Midwest, southern Appalachians and Southeast coast," Rayno said. 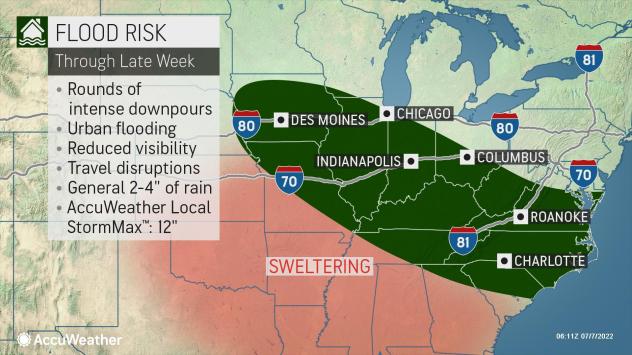 A general 2-4 inches of rain will fall in this zone with pockets where two times that amount can occur from through Friday. An AccuWeather Local StormMax™ rainfall of 12 inches is possible in the most extreme cases.

Downpours that were heavy enough to slow travel progressed across northern Maryland, southern Pennsylvania, northern Delaware and southern New Jersey from Wednesday night to Thursday morning. This system will exit the mid-Atlantic coast on Thursday afternoon.

Much of the rain can fall within a couple of hours, which is more than enough to lead to flash flooding of small streams, urban areas and low-lying portions of agricultural tracts, regardless of the status of prior soil conditions.

From Monday to Tuesday, portions of Indiana were hit with 4-8 inches of rain and flash flooding.

Motorists should never attempt to drive through flooded roads as the water may be deeper than it appears and the road beneath the water may have been weakened or washed away, experts say. Avoid camping along small streams when there is the potential for heavy rain, meteorologists warn.