First it was a ginormous python in the Everglades. Now, a giant snail, which can grow larger than a human hand, has turned up in the Sunshine State in a place where the weather might not be optimal for it. Nevertheless, officials aren't taking any chances.

The giant African land snail was detected in New Port Richey, Florida, on June 23. The invasive mollusk has no natural predators and poses a threat to agriculture and human health.

As if there weren't enough creepy crawlers lurking through Florida, the giant African land snail returned to the Sunshine State's ecosystem last week after being eradicated in 2021. The news comes just days after an enormous python was pulled from the brush of the Florida Everglades last month.

According to the Florida Department of Agriculture and Consumer Services (FDACS), the giant African snail, commonly referred to as GALS by invasive-species aficionados, is native to East Africa and can grow to 8 inches in length, which is roughly the size of an adult hand.

In late June, just north of Tampa, a gardener in Pasco County spotted a giant African land snail, which was the first time it had been detected outside of South Florida. Just days later, the FDACS confirmed the discovery of the snail in the New Port Richey area of Pasco County on June 23.

Until last week, the GALS had been detected only in Miami-Dade County, which is close to the Florida Everglades and is an ecosystem that provides the snail species with ample vegetation. While the GALS can survive in many different environments, the snail typically likes more humid areas with dense vegetation, Dr. Bill Kern, an associate professor at the University of Florida who specializes in nuisance wildlife management, told The New York Times.

Pasco County is roughly 228 miles northwest of Miami-Dade County and while the weather isn't drastically different between the two regions, there are still some differences that make it less than ideal for the snail to live in. 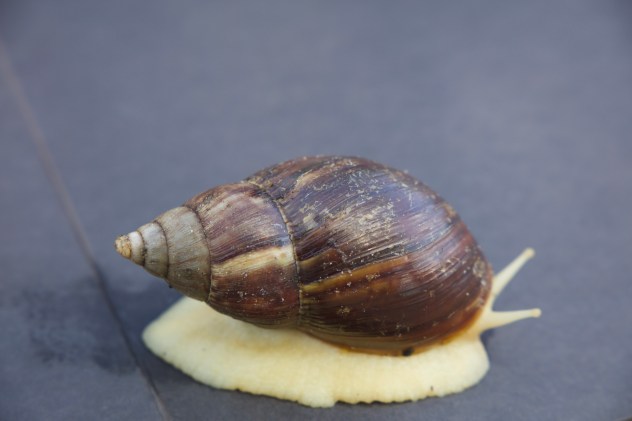 If the weather becomes too "unfavorable" for the snails, they will bury themselves in the soil and remain inactive for up to a year, the FDACS reports.

She explained that exotic pet owners still keep these snails, even though it is federally prohibited to own them as a pet in the United States. One pet owner, whose location is undisclosed, shared a video with Metro UK, a news site based in England, of her cuddling with her giant African snail.

However, not all owners are as careful with their pet snails. Once they get out into the wild -- either by owners accidentally losing them or owners releasing them into the wild -- they can quickly reproduce, producing up to 2,500 eggs per year. 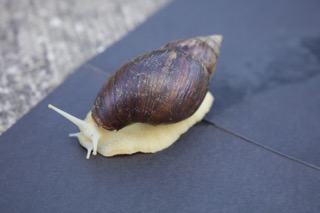 And they aren't picky eaters. Described as "one of the most damaging snails in the world" by FDACS, the giant snails feed on more than 500 different types of plants and will even eat the paint or stucco off homes as a source of calcium. Snacking on just about anything, the snails can cause extensive damage to tropical and subtropical environments.

The snail also poses a serious health risk to humans as it carries the parasite called rat lungworm, which can cause meningitis in humans and animals. According to the FDACS, if people handle the snail without gloves or eat unwashed produce, such as lettuce, that the snail has slid across, they run the risk of getting infected.

Although the snail's natural speed is "extremely slow," they can quickly cover large distances by clinging to vehicles and machinery or hitching a ride on plants or local produce, according to the USDA. 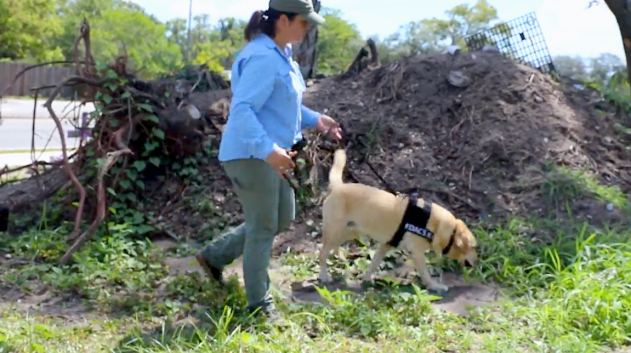 In hopes of containing them, state officials placed a portion of Pasco County in the New Port Richey area under quarantine last week. Unlike the COVID-19 quarantine, this one prohibits residents from moving plants, soil, debris, building materials, compost, or yard waste outside the designated zone.

Since the snails have no natural predators, eradicating them is challenging. Within the quarantined zone, officials started using a snail bait that contains metaldehyde, a pesticide approved for use in vegetable and ornamental crops on fruit trees and other plants. As the giant African snail feeds on the baited plants, the pesticide disrupts their digestive system and kills them.

Officials tell AccuWeather one of their several pest-sniffing dogs has been trained to detect the GALS in Pasco County. The Mollusk Detector Dog named Mellon, who is "actively surveying for this pest," will sit once it smells the snail. Officials will then collect any snails and treat the area with snail bait.

In the hopes of informing the public of the threat posed by the snails, the FDACS released a "wanted" poster on Twitter, warning the public not to touch the "abnormally large snail."