Nearly 60,000 people have been forced to evacuate on Thursday after an "East Coast Low" brought historic flooding to some of the most populated areas of Australia.

Communities in Sydney, Australia, were submerged in mud-brown water on July 5 after days of torrential rain caused rivers to swell.

A natural disaster has been declared by the federal government of Australia after areas in the eastern portion of the country have received nearly a year's worth of rainfall in just a few days. Roads have turned into rivers in major cities like Sydney and in the surrounding region.

Major flood warnings remained active Thursday in the state of New South Wales with over 85,000 residents urged to evacuate due to rapidly rising flood waters, according to The Associated Press (AP).

Sydney is the capital city of New South Wales, an Australian state home to more than 8.1 million people.

Wednesday's evacuation numbers rose significantly from Tuesday when 50,000 residents were covered by evacuation orders or official warnings to prepare to abandon their homes, according to the AP.

According to authorities on Thursday, the number of residents under evacuation orders began to slowly subside to roughly 60,000 residents.

The most extreme flooding was reported near the Hawkesbury-Nepean River just northwest of Sydney prompting the fourth flood emergency in 16 months in the region, the AP said.

"Around 100 rescues were completed Monday night by emergency response teams as people became trapped in their cars on flooded roads or in inundated homes in the Sydney area," State Emergency Service manager Ashley Sullivan said in an AP report.

Dozens of records were shattered in the area this past weekend after historic rainfall soaked the region between Sydney and Wollongong, Australia. In just 24 hours, 12 inches (298 mm) of rain was recorded, setting a new record for the highest daily rainfall record for July at that weather station in Darkes Forest, New South Wales, after 126 years of observations, the Australian Government's Bureau of Meteorology (BoM) reported.

"The Campbelltown gauge, with more than 30 years of data, recorded its highest ever daily total rainfall amount for any month, while six gauges with more than 100 years of observations have set a record four-day total for July," the BoM said. 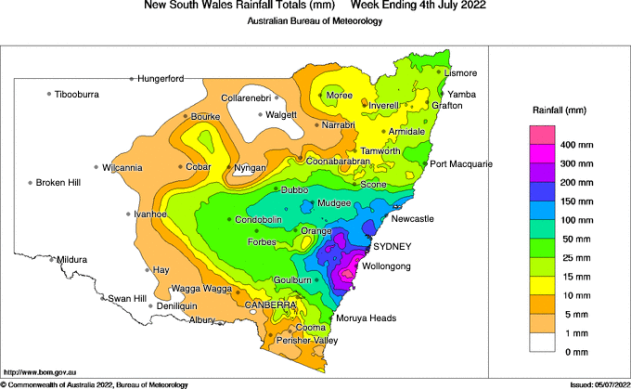 Rainfall totals over the course of the week have amounted to nearly 28 inches (700 mm) just south of Sydney near Wollongong, causing rivers and streams to be completely overwhelmed in the region. The average rainfall for a year in this region of Australia is between 30 and 40 inches (750 and 1000 mm).

Floodwaters from overflowing rivers and streams quickly overwhelmed properties in the region. One homeowner, Fiona Young of Wollombi, New South Wales, was forced to survey the extent of damage to her property via kayak.

Fiona Young floated by her house in a kayak in Wollombi, Australia, on July 6, as flash flooding surrounded her property.

"I'm just floating by my house; you can see the water level there," Young said as she panned the camera to show a water level that reached nearly halfway up the first floor of the home.

Not only were areas inundated with flood waters, but severe weather warnings were also issued for New South Wales for damaging wind gusts and hazardous surf Monday.

A ship leaving the port in Wollongong had lost power Monday morning and was met with giant waves with swells towering 26 feet (8 meters) and winds howling at 34 mph (55 km/h). The coastline near Wollongong is rigid and rocky with huge cliffs meeting the ocean and with the hazardous weather conditions, the ship and its crew members were in a life-threatening situation.

In an attempt to tow the ship back to port, the towline snapped and the rescue effort had to be called off due to the dangerous swells and wind, The Associated Press reported.

The ship remained out at sea as anchors attempted to keep the ship stationary as seas calmed on Wednesday.

As of Thursday, no deaths have been reported from this major weather event. Rainfall that persisted across the region on Wednesday heightened the risk for rivers and lakes such as Wollombi Brook, Macquarie River and Tuggerah Lake to overrun their banks and potentially overflow dams. 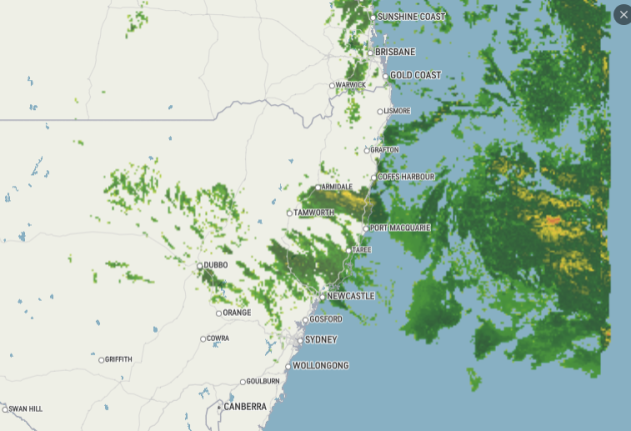 A screen capture on Tuesday night, local time, of rain continuing to berate the east coast of Australia as the East Coast Low continues to swirl out at sea. (AccuWeather)

The potent storm that caused the historic rainfall and subsequent flooding is known as an East Coast Low. These storms often move slowly and can bring copious amounts of rain over the same areas for multiple days. These types of storms form just off the east coast of Australia over the Tasman Sea.

This storm in particular was very slow-moving and formed off the east coast of New South Wales where sea surface temperatures are above average for this time of year, giving the storm more energy and moisture. These factors contributed to the heavy rainfall that spread across the area over the weekend.

"The city of Sydney received around 20 times [its] normal July rainfall in just four days and additional, albeit lighter, rain on Wednesday continued to have an impact on the flooding problem," AccuWeather Senior Meteorologist Jason Nicholls explained.

The same storm that brought extensive flooding to New South Wales began to track over New Zealand on Thursday. AccuWeather meteorologists warn that New Zealand residents can face impacts such as flash flooding, downed trees, power disruptions and delays as the storm shifts over the country.

"The slow-moving storm that flooded the Sydney area shifted focus onto New Zealand on Friday with widespread rainfall of 0.75-2.00 inches (19-50 mm) and local amounts to 3 inches (75 mm), especially along the west slopes of the southern island," explained Nicholls. 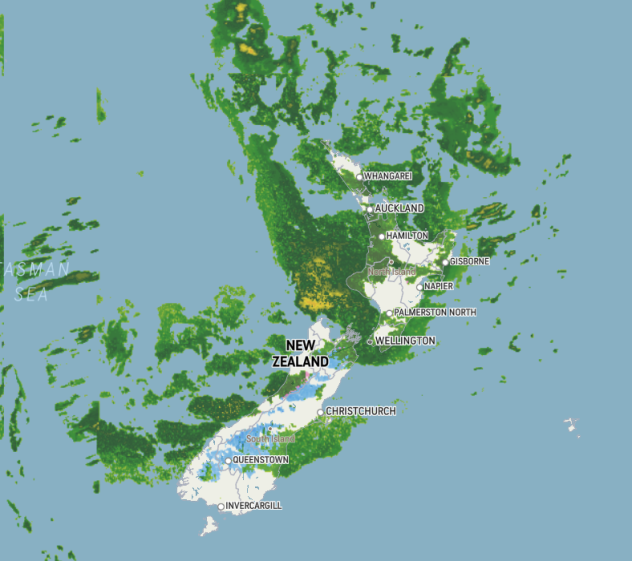 A screen capture of Thursday night, local time, of the storm bringing steady rainfall and mountain snow over parts of New Zealand. (AccuWeather)

Forecasters expect the heaviest rain to fall from the mountains westward. However, rain is not the only type of precipitation spreading across the region.

"Snow is likely over the mountains of the southern island above 700 meters (2300 feet). Wind gusts of 50-60 mph (80-97 km/h) are also possible, especially in western and exposed areas," noted Nicholls.

On Friday, the New Zealand Met Service had numerous warnings in place for threats ranging from heavy rain and snow to strong winds. Orange level warnings were issued for heavy rain across the western regions along the central coastline as the unsettled weather continued to spread across the country.

Into early next week, another chance for heavier rainfall and damaging wind gusts will arrive across the northern half of New Zealand.