This weather phenomenon not only looks like an 'inland hurricane' on radar, it can feel like one too

A derecho is a thunderstorm complex characterized by severe, damaging, straight-line winds that occur along a continuous or intermittent 400-mile-plus path.

A derecho is a widespread thunderstorm complex, but its severity, distance and duration make this weather phenomenon stand out from the more typical spring and summer storms.

The term "derecho" is derived from the Spanish adverb which means "straight" in English. The term tornado in Spanish means "to turn."

However, while damage from a thunderstorm downburst may occur over a few miles or less, the damage produced by a derecho occurs over a much more broad scale. 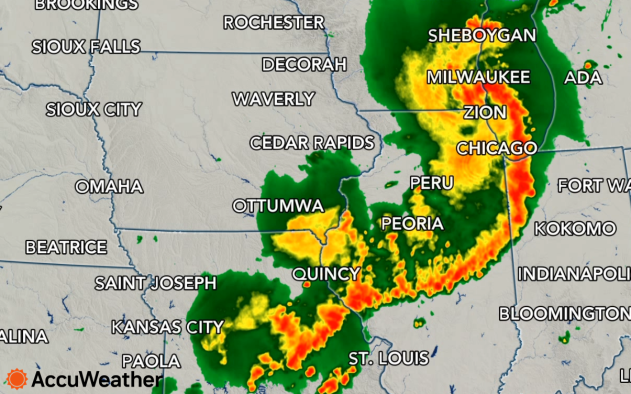 While a derecho may look like an inland hurricane on radar and satellite images, and seem like the same in person with its combination of strong wind and torrential rain, the meteorological community has criteria that determines whether or not a thunderstorm complex has achieved the "d-word" level.

Historically, the definition dictated that severe, damaging, straight-line winds had occurred along a continuous 240-mile-long path or greater. However, in 2021 the Storm Prediction Center (SPC) updated its definition to "400 miles (about 650 km) with a width of at least 60 miles (about 100 km)." A derecho must include wind gusts of at least 58 mph or greater along most of its path, SPC adds.

The SPC will typically determine whether storm conditions are severe enough to have reached derecho status.

Some examples of famous, deadly and damaging derechos include the long-lived thunderstorm complex during the summer of 2012 known as the "D.C. Derecho." 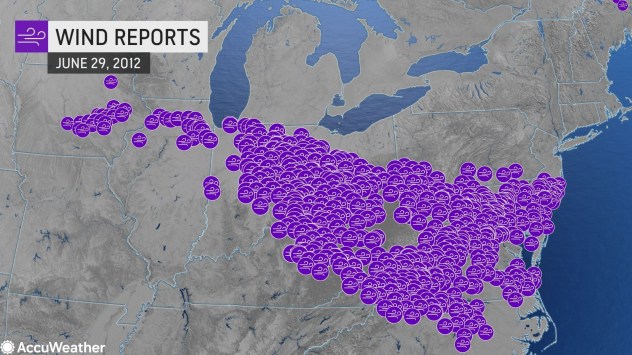 This image shows the list and location of severe weather reports from the derecho of June 29-30, 2012. There were more than 1,000 reports of damaging winds during the event. (

The 2012 derecho had its beginnings over Iowa on June 29 and traveled approximately 800 miles to the mid-Atlantic coast on June 30.

Nearly two dozen people were killed and damage approached $3 billion during the weather event. Also, more than 4 million utility customers lost power as scores of trees came down and took power lines with them in the two-day span. 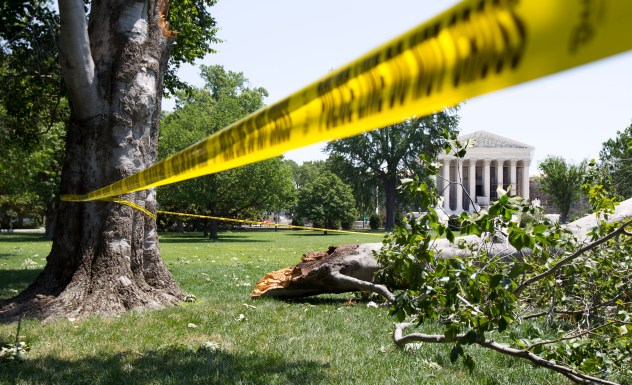 In this June 30, 2012, photo, an American beech tree is down on Capitol Hill grounds in Washington, D.C., across from the U.S. Supreme Court after a derecho swept across the region. (AP/Manuel Balce Ceneta)

There have been dozens of derechos over the past four decades alone.

During July 11-15, 1995, four separate derechos occurred over the northern tier of the United States. Damage from the four events approached $1 billion.

This hand-drawn map shows the areal coverage of the four derechos that occurred spanning July 11-15, 1995, over the northern United States. (NOAA)

"Derechos and their parent thunderstorm complexes often form and move along the northern edge of a large rim of heat," Pydynowski said.

This is often the location of a strong jet stream overhead, which helps to not only give the storms more strength, but also causes them to move along at a swift pace.

While multiple complexes of thunderstorms often occur every week during the late spring and summer, those which reach the criteria of a derecho are significantly less common. 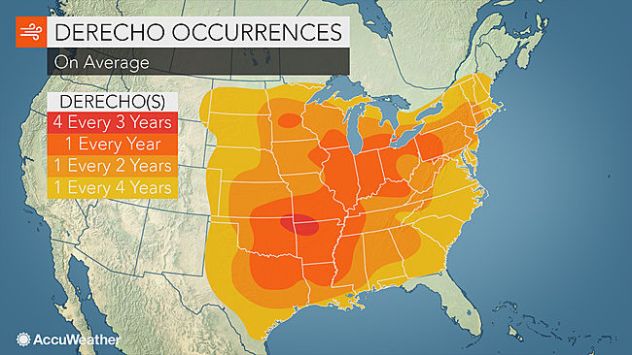 Frequency of derecho events (240 miles or greater) in the United States.

In addition to the U.S., derechos have been documented in Europe over the past few decades.

A derecho should not be confused with a squall line, which is a narrow zone of thunderstorms some of which may be severe. A squall line forms along or ahead of a cold front and typically marks the end of warm or hot weather, according to the SPC.

Squall lines can extend for 1,000 miles or more and travel similar distances in extreme cases.

During or after the passage of a derecho, heat may build, cooler air may follow or temperatures may remain nearly the same.

Download the free AccuWeather app for your local forecast, including severe weather watches and Want next-level safety, ad-free? Unlock advanced, hyperlocal severe weather alerts when you subscribe to Premium+ on the AccuWeather app. AccuWeather Alerts™ are prompted by our expert meteorologists who monitor and analyze dangerous weather risks 24/7 to keep you and your family safer.