Multiple rounds of severe weather will develop across the northern Plains and Upper Midwest through the end of the week, putting many residents on alert.

Dry and cooler air has settled across the northern Plains after a cold front replaced the recent spell of record-challenging heat, but the tranquil weather pattern will be short-lived as the threat of severe weather is expected to spark thunderstorms to end the week.

AccuWeather meteorologists warn that there will be multiple days where severe weather will largely occur overnight, elevating the threat even more as many residents will be sleeping when storms are expected to roll through the region.

The Upper Midwest and northern Plains have been able to enjoy comfortable and dry conditions over the past couple of days since the last round of severe storms rolled through the area on Monday. From North Dakota to Minnesota and into Nebraska, there were over 170 damaging wind reports, almost 40 reports of hail and three tornado reports.

These same areas are expected to be in the path of yet another round or two of severe weather into the weekend as temperatures and humidity levels rise due to the expansion of a heat dome that has sent the mercury to over 100 degrees Fahrenheit in the southern U.S. this week. 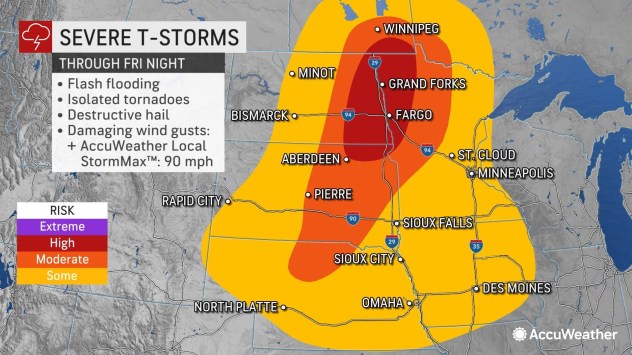 Cities such as Fargo, North Dakota, and Minneapolis neared daily records as temperatures soared into the mid-90s F on Thursday. The long-standing record high in Fargo for Thursday is 96 F which was set in 1898. This is a dramatic change for the region as temperatures were in the low 80s on Wednesday.

"Highs on Friday across the northern Plains will be as much 6-12 degrees above average with plenty of humidity," AccuWeather Meteorologist Alex Dasilva stated.

The resurgence of heat in addition to higher humidity will be just a few of the ingredients that could aid in the development of thunderstorms through the end of the week.

Multiple tornadoes were reported on Thursday in Kansas, including along Interstate 70 near Wilson, Kansas, and Ellsworth, Kansas. Large hail was also reported as a result of storms on Thursday, including a 2-inch-diameter hail report near Baxter, Minnesota.

"The northern Plains and Upper Midwest will once again face a threat of severe weather into Friday night where residents around Fargo, North Dakota, and Aberdeen, South Dakota, could deal with a round of potentially damaging thunderstorms," AccuWeather Meteorologist Brandon Buckingham said.

Even storms that are not severe can still pose a danger. On Wednesday, a lightning strike from a non-severe storm killed a woman and two dogs in Southern California as storms tracked over the region. 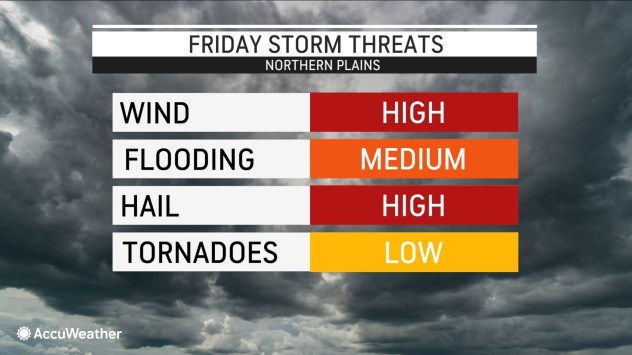 Any strong storm through Friday night could feature large hail, wind gusts potentially nearing the AccuWeather Local StormMax™ of 90 mph and even a few isolated tornadoes.

Motorists along interstates 29, 80, 90 and 94 should remain on alert for sudden changes in road conditions as any storm could bring intense downpours that could reduce visibility and increase the likelihood of hydroplaning, experts say. In some cases, so much rain can pour down in less than an hour to lead to flash flooding of small streams, low-lying and urban areas.

"Although locally damaging thunderstorms are possible, non-flooding rainfall can largely be beneficial for area wheat and corn crops in the center of the nation," Buckingham explained. 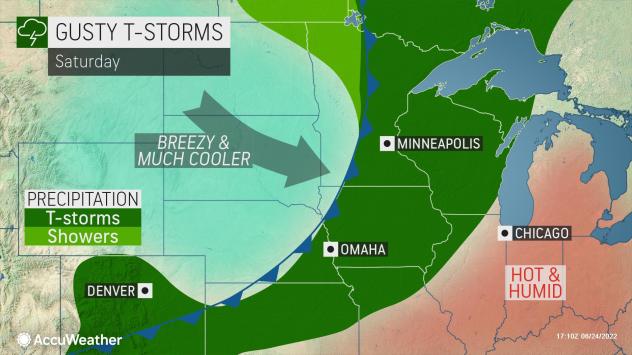 Storms are expected to fire farther to the east and stretch from the western Great Lakes through the central Plains. While any of the storms on Saturday can pulse to become heavy and gusty, the greatest chance of severe storms is likely from parts of northern Missouri to southeastern Iowa, northwestern Illinois and southern Wisconsin.

There is a rule of thumb that farmers in the northern Plains go by, Buckingham said. Around an inch of rain per week is nearly ideal for most corn and soybean fields this time of year, and some locales across southern Minnesota, northern Iowa and even into southern Wisconsin could experience rainfall of this magnitude with storms expected to roll through the region through Friday night, he explained. 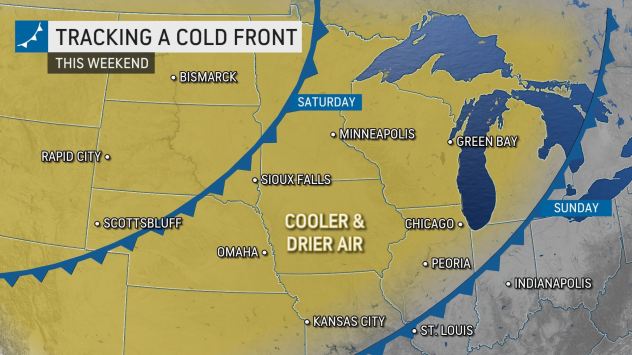 By the weekend, AccuWeather meteorologists say the heat will be trimmed in the northern Plains as the cold front responsible for bringing severe weather to the area passes to the south.

"Even though a cold front will bring some relief from the heat on Saturday in the form of a few showers and thunderstorms, by the time Sunday rolls around, temperatures from the northern Plains to the Midwest will be several degrees below average," DaSilva said.

Sunday looks to be the most comfortable day of the weekend as cooler conditions and low humidity take hold across the region which will result in a fantastic day for any outdoor activities, forecasters say.