An intense heat dome will remain parked over the southern U.S. into the weekend, increasing energy demands and, with the humidity, posing a significant risk of heat-related illness.

An atmospheric furnace will continue to bring scorching heat and triple-digit temperatures across much of the south-central U.S. late this week and into the weekend.

Scorching heat that has resulted in triple-digit temperatures over much of the central United States so far this month will concentrate on areas from the lower part of the Mississippi Valley to near the Gulf coast into this weekend.

Unlike earlier this week, northward surges of heat that reach the Upper Midwest will be limited into the weekend. A more active jet stream across southern Canada and the northern tier of the United States will tend to keep the extreme heat from farther to the south at bay.

For example, around Chicago, temperatures may max out in the upper 80s to near 90 F on one or two occasions on Saturday, but the 100-degree temperatures will stay away from Chicagoland and many other Midwest cities through the weekend.

Temperatures stopped at 99 at Chicago O'Hare Airport on Tuesday but reached 101 at Chicago Midway Airport.

Farther south, the atmospheric furnace will be going full blast into this weekend. 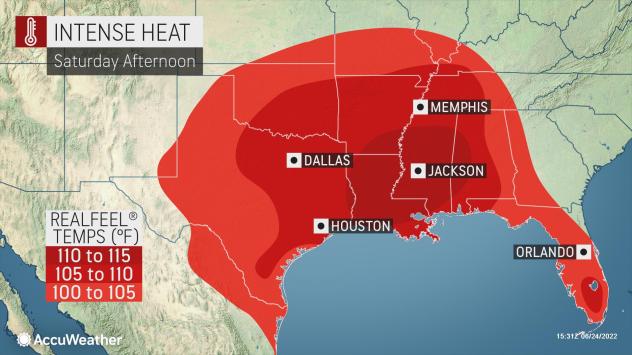 Some cities in the south-central region that have not yet hit 100 degrees Fahrenheit this year will do so in the pattern, while other cities will add several more days to their string of century-mark highs.

"The dome of extreme heat will tend to contract toward the South Central states into this weekend, but some spikes in temperature will occur farther to the north and east," AccuWeather Lead Long-Range Meteorologist Paul Pastelok said.

Following record-challenging, near-100-degree highs as far to the east as the Carolinas and Georgia at midweek, another brief surge of heat is likely on Saturday over the middle Mississippi Valley and the lower part of the Ohio Valley. Saturday's record of 102 set in 1954 in St. Louis may be tough to equal, but temperatures are forecast to climb into the upper 90s. 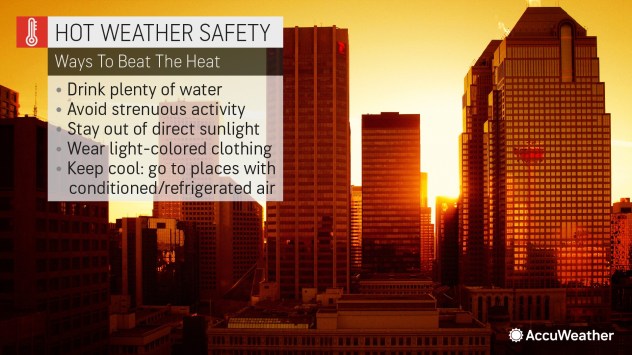 Some daily record highs will fall from Tennessee, Mississippi and Louisiana to Texas right into this weekend. But, regardless of whether a record high is set or not, temperatures will average 5-15 degrees above normal, while AccuWeather RealFeel® Temperatures top 105, 110 and even approach 115 in some locations, posing danger to those in poor health, those who overdo it or people who live without air conditioning.

As of Thursday, June 22, Memphis, Tennessee, had accrued four days of 100-degree temperatures thus far this month. The city could potentially add to that amount through this weekend, with a forecasted 100 high for Saturday poised to tie the record set in 1988 and 2012. Mobile, Alabama (97 forecasted) and Baton Rouge, Louisiana (97 forecasted) may also challenge records on Saturday.

New Orleans has not had any days with triple-digit highs just yet this year, but that could change on Saturday with highs forecast to range from the upper 90s to the low 100s around the metro area. On Thursday and Friday, the city hit 99 degrees. Saturday's forecasted high of 96 will fall only narrowly short of that day's record of 101 set in 2012.

On Friday, two other Louisiana cities hit record highs that lasted for over a century, with Alexandria going up to 104 (beating out a record of 102 set in 1906) and Shreveport feeling a 103-degree day (breaking the previous record of 101 set in 1882).

Houston racked up a couple of triple-digit highs on Sunday and Monday and another one occurred on Thursday when the city tied its record of 101 degrees set in 2009. Saturday's high, forecasted at 99, will make a run for the record of 102 set in 2009 and 2012. 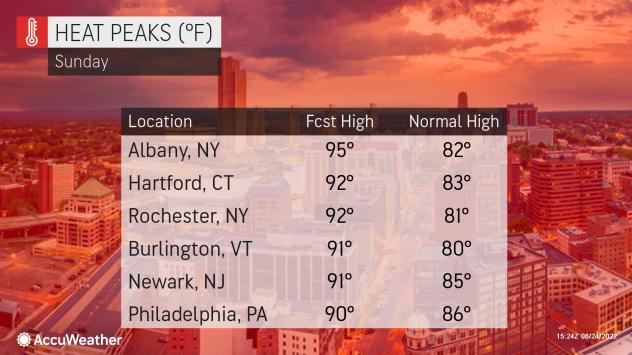 It has been a blistering hot month already in much of Texas with a lack of rainfall in many areas. San Antonio has tallied 15 days with highs at or above 100 F in June as of Friday, plus five 100-degree days in May. The home to the Alamo averages about two days in June and 18 days each year with triple-digit highs.

Meanwhile, Austin has already had 13 days of 100-degree temperatures or higher this June as of Friday. At the Texas state capital, the first 100-degree day typically does not occur until around July 4. 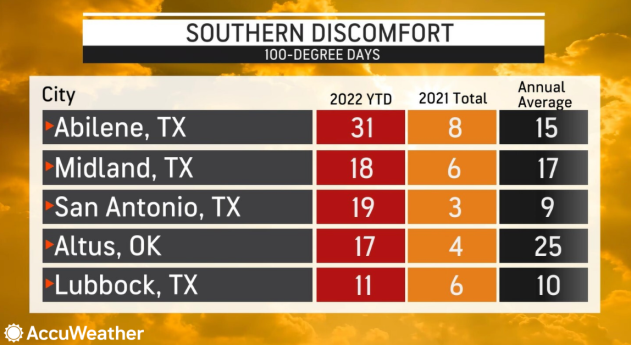 Despite the frequency of extreme heat over the South Central states this month, Oklahoma City has not yet hit 100 so far. One reason for this may be plentiful rainfall this spring. When the ground is moist, more of the sun's energy is used up evaporating the moisture, rather than heating the ground. Saturday could bring an end to that streak.

"There are some signs the extreme part of the heat will ease over the south-central U.S. starting late this weekend or early next week," Pastelok said. "The massive northward bulge in the jet stream and hot air aloft will give way to a more west-to-east jet stream configuration and lower temperatures aloft." When the air high above the ground is cooler, temperatures tend to be lower near the ground.

The overall area of extreme heat will tend to shrink from most directions as the weekend progresses. Then, as this jet stream pattern changes next week, temperatures should throttle back to closer to average over the southern Plains. 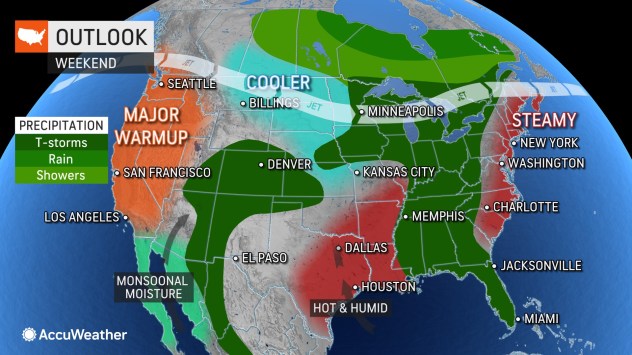 One change that beachgoers may welcome on the Atlantic coast this weekend will be a buildup of warmth and humidity from near Interstate 95 to the coast. This is likely as an area of high pressure tries to build over the western Atlantic. The building high could also keep rain from the Appalachians from racing to the coast.

Through June 21, 506 heat records have been broken throughout the United States, with 76 more forecast through the beginning of next week.