The severe storms on Thursday may result in the U.S. setting a new tornado record for the month of October, AccuWeather forecasters say.

Fierce winds could prove damaging in both the southern Plains and Southeast, while areas along the southeast Atlantic coast could also deal with flash flooding and isolated tornadoes.

October has been nearly record-setting in terms of tornado activity across the United States, and more severe weather is forecast into Thursday night for areas from South Florida to the Carolinas.

A potent storm that started out this week on the West Coast as a bomb cyclone has moved eastward across the U.S., leaving a trail of storm damage in its wake. The storm will finally set its sights on the eastern half of the country as the associated cold front will sweep across Florida and the Southeast coast prior to the end of the week, heightening the threat of severe weather.

States such as Florida, Georgia, North Carolina and South Carolina will be at the greatest risk for severe storms to kick up into the overnight hours as the front swings eastward, AccuWeather meteorologists say. 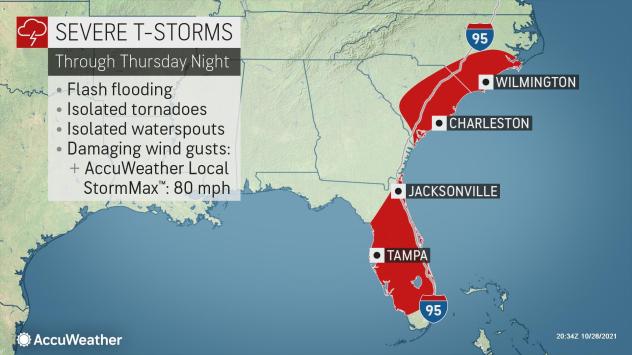 "As warm and moist air surges northward in the Southeast, a line of severe thunderstorms will erupt and progress eastward and southward into Thursday night. Cities such as Wilmington, North Carolina; Charleston, South Carolina; and Jacksonville, Tampa and Orlando, Florida; will all be at risk for dangerous storms," said AccuWeather Meteorologist Ryan Adamson.

Winds in the strongest storms across Florida, Georgia and the Carolinas can gust up to an AccuWeather Local StormMax™ of 80 mph, which could result in damage.

"While damaging winds and flash flooding will be the main hazards, enough spin will be present in the atmosphere for isolated tornadoes to also be a concern," Adamson said.

With the month coming to a close, there remains a decent chance that the record for most confirmed tornadoes across the U.S. during October will be broken. The number of October 2021 preliminary reports currently stands at 129, directly challenging the previous record set in October 2018 of 123 confirmed tornadoes. However, these reports will still need to be confirmed and are subject to revision until that occurs. 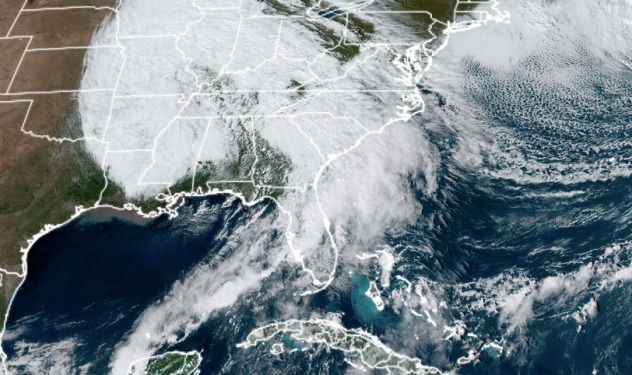 This image shows bubbly clouds over the southeastern United States indicative of thunderstorms on Thursday, Oct. 28, 2021. (CIRA at Colorado State/GOES-East)

There have been 13 deaths to date this year across the United States as a result of tornadoes, according to the SPC. Meteorologists say people living in areas at risk for severe storms should stay vigilant and always have a plan in place.

Unsettled weather into Thursday night will not be limited to the states along the Southeast coast. Thunderstorms will also kick up across northeastern Arkansas, southeastern Missouri, Tennessee, northern Mississippi and Alabama. Risks associated with these storms mainly include small hail and locally gusty winds, but they are not expected to become severe. 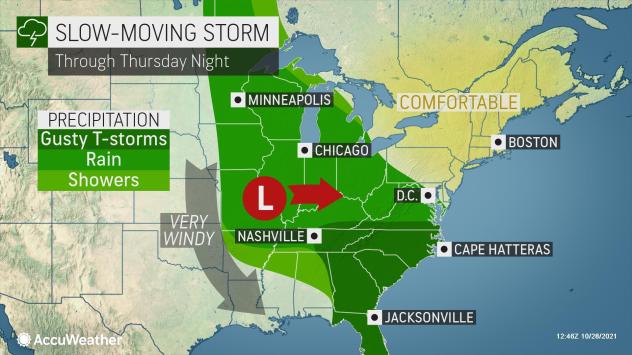 Farther north, widespread rain and showers will encompass portions of the Ohio Valley and mid-Atlantic region before shifting into areas of the Northeast on Friday.

Directly behind this storm, there will continue to be an uptick in winds across Kansas, Oklahoma and northern Texas. Strong winds from the northwest can reach ranges of 40-60 mph through Thursday with an AccuWeather Local StormMax™ of 70 mph possible blowing across South Central states.

Winds were already gusting from 40-60 mph across the Oklahoma and Texas panhandles Wednesday night. Locations such as Guymon, Oklahoma, even reported a gust of 68 mph. 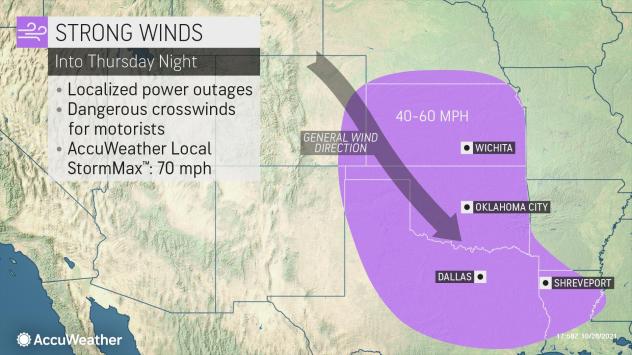 This strong wind event will increase the risk for localized power outages as well as challenging travel conditions. Forecasters warn that crosswinds upwards of 40 mph can cause difficulty to motorists, particularly high-profile vehicles.

After this round of severe weather subsides, a few showers are in the forecast for Friday across northern Florida. Most of the Southeast is forecast to have dry and pleasant weather this weekend.

What to spray on your jack-o'-lantern to keep it fresh till Halloween
Nor'easter similar to 1991 'Perfect Storm,' may become tropical
Supernatural forces at play? Tampa Bay has dodged a direct hurricane hit for a century