The storm system arriving later this week won’t be as strong as the nor’easter, but it could still exacerbate ongoing flooding issues and impact cleanup operations.

Even after the incessant rain stops pouring in the Northeast, dangerous flood risks will linger in the region as another storm system will likely follow close behind.

AccuWeather meteorologists say more soaking rain and gusty winds are expected to return late this week for portions of the Northeast, a region that was just blasted by the first nor'easter of the season. The storm left roads flooded, trees scattered in pieces and more than half a million without power.

After just a brief break in stormy weather, another storm will push across the center of the country and enter into the eastern United States.

Tidal gauges in the mid-Atlantic were running 2 to 4 feet above normal Friday morning due to easterly winds on the edge of the storm moving in. Gusty winds from the east and northeast will continue to push water toward the Atlantic coast and into the bays and tidal rivers. The coastal flooding will be the worst around the time of high tide.

The AccuWeather Wind Flow map shows strong easterly winds moving onshore in the mid-Atlantic on the morning of Oct. 29, 2021.

In low-lying communities that are most prone to coastal flooding can be hit with the heaviest rain at the same time, which can elevated the risk of inundation. The Inner Harbor of Baltimore, the tidal basin around Washington, D.C., and portions of Annapolis, Maryland; Wildwood, New Jersey; New York City and Boston can be hit hard with the nearly simultaneous effects of heavy rain and above normal tides.

According to NOAA, the Delaware Bay at Reedy Point near Delaware City, Delaware is expected to crest at 9.5 feet this evening at 7 PM ET, breaking the record of 9.2 feet set in April 2011. The period of record for this station is more than 40 years.

Rain will spread over the Ohio Valley and reach into the mid-Atlantic and portions of the Northeast as the storm navigates eastward on Friday.

“While this approaching storm system isn’t forecast to be nearly as strong as the nor’easter which impacted the region earlier this week, additional heavy rainfall could further exacerbate flooding issues that are already in place,” AccuWeather Meteorologist Adam Sadvary said.

Most of the region is not forecast to encounter rainfall rates as prolific as what occurred with this week's nor'easter. However, there will be one area that has to contend with heavy rainfall on Friday. 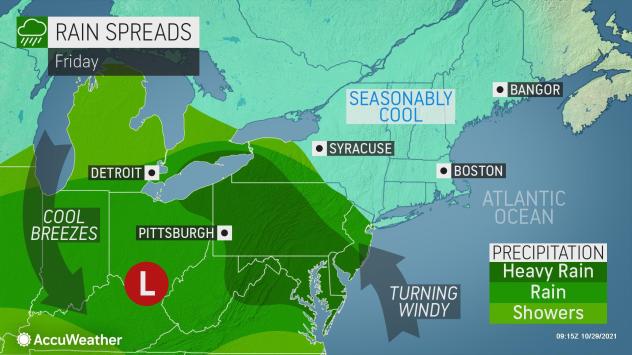 "Thankfully, these areas did not get hit very hard by the nor’easter, so only localized flash flooding in low-lying and poor drainage areas can be a concern," AccuWeather Meteorologist Nicole LoBiondo said.

That will not continue to be the case from Friday night to Saturday as the storm pushes farther east. Another round of soaking rainfall is in store for some of the areas that received the worst impacts from the nor'easter that qualified as a bomb cyclone early this week.

In some locations, especially from the New York City tri-state area to southern New England, the powerful storm left abundant debris in its wake.

Saturday will bring bad news for residents hoping to clean up the mess Mother Nature left behind. 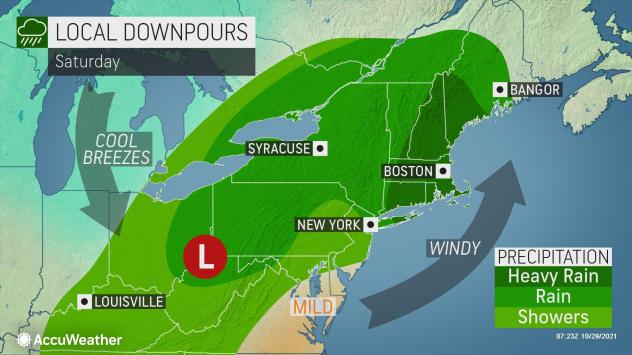 Rounds of steady rain will spread over the entirety of the Northeast and bring an additional inch or two of rainfall to many. While that amount of rainfall over the course of 24 to 48 hours may not seem like much, it can be more than enough to renew flooding concerns.

Additional rainfall can contribute to already swollen rivers and trigger urban flooding. Some populated areas may be particularly susceptible to urban flooding as any leaves stripped from trees during the nor'easter can easily clog storm drains, according to LoBiondo. Any clogged storm drains will likely worsen flooding concerns for some as floodwaters will have no other place to flow safely.

"Even though the storm is forecast to keep moving steadily along, it will tend to pivot over the region as it weakens," AccuWeather Senior Meteorologist Alex Sosnowski said. This will allow some areas to receive much heavier, drenching periods of rain for a time. 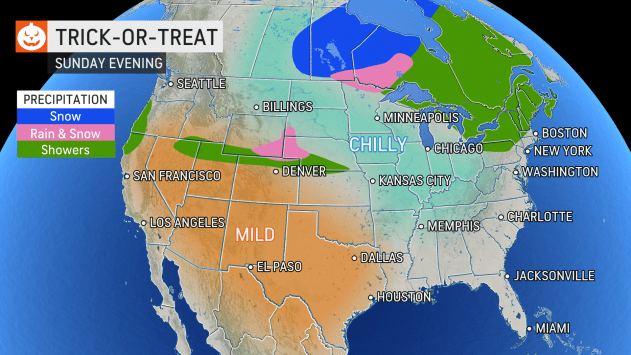 Even for locations in the Northeast that aren't cleaning up after the nor'easter, this rainfall may force some residents to change their plans leading up to Halloween.

This storm will keep soggy, spooky weather in the forecast for any neighborhoods that hold trick-or-treating before Halloween itself.

“Conditions appear to improve by the time Halloween rolls around. Those across the region planning on trick-or-treating on Sunday may still experience a lingering shower or two, but heavy rainfall should not impede outdoor holiday activities,” Sadvary said.

What to spray on your jack-o'-lantern to keep it fresh till Halloween
Nor'easter sends enormous waves crashing over beachfront homes
Explorers become 1st ever to reach bottom of mysterious 'Well of Hell'
Nor'easter similar to 1991 'Perfect Storm,' may become tropical