Ida to unleash widespread flooding, winds and tornadoes across South

Ida to produce widespread impacts as it tracks inland

The storm's impacts are far from over as it is forecast to unleash flooding rain from the South to the Northeast through late this week.

Ida tore a path of destruction across Louisiana as it moved over land as a hurricane for nearly 16 hours, killing at least two and leaving the entire city of New Orleans in the dark. But, AccuWeather forecasters warned that despite the fact that the National Hurricane Center (NHC) downgraded Ida to a tropical depression on Monday evening while it trashed parts of Mississippi, the storm’s rampage is far from over.

The tropical depression had maximum sustained winds of 30 mph and was located 100 miles southwest of Nashville, Tennessee, as of Tuesday midday. Ida was moving northeast at 15 mph. A cornucopia of watches and warnings, including, flash flood watches and warnings and flood warnings, were plastered across much of the South as the storm continued its trek inland. 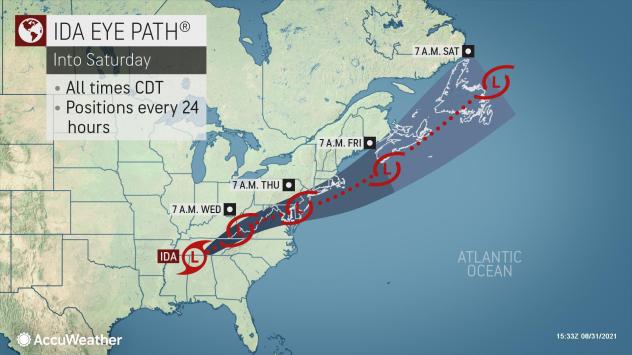 The tropical cyclone held together through Monday as it moved over land, even after moving away from the warm waters in the Gulf of Mexico. As Ida continues to press northward across the lower Mississippi River Valley early this week, a cold front will be sweeping through the northern tier of the United States.

Because of this combination, AccuWeather meteorologists predict that the impacts from Ida will expand well inland from where the hurricane made landfall along the Gulf Coast on Sunday afternoon.

"Away from the immediate Gulf Coast, Ida is expected to bring impacts northward through the Tennessee Valley and into the Northeast," said AccuWeather Senior Meteorologist Dan Pydynowski.

Impacts will be vast and include damaging wind gusts in the Mississippi River Valley, tornadoes that could spin up along the system's path and rain that will pour down up through the mid-Atlantic coast. Wind gusts of tropical storm strength, which is 39 mph or greater, may extend as far inland as southwestern Tennessee through Tuesday. However, the most widespread impact from Ida is expected to be the heavy, tropical rainfall associated with the storm. 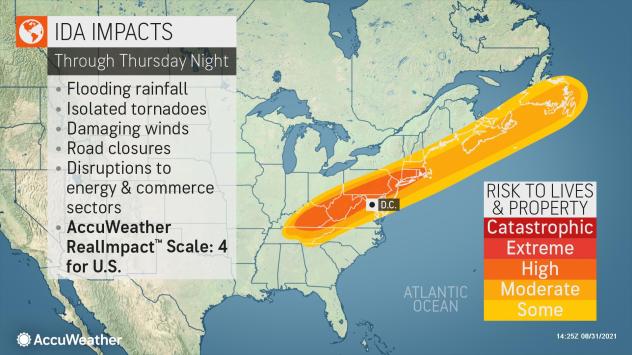 The heaviest rain has remained concentrated near where Ida made landfall. Over a foot of rainfall from Ida has been recorded in parts of Louisiana and Mississippi. But, several inches of rain are forecast to fall across an area much farther northward and eastward from the Louisiana coastline.

"Following the path of Ida across the eastern United States will be a swath of heavier rain, likely to produce a total of 4-8 inches of rain," Pydynowski warned. "Some of the locations in Tennessee that were hit hard with flooding downpours earlier this month" are along this projected path, he added.

In Tennessee, officials from the state’s Emergency Management Agency are warning that the system could trigger immense flooding in the state, including the same areas that are still reeling from last week’s tragic flooding.

The heavy rain event in Humphreys County on Saturday, Aug. 21, dumped an estimated 17 inches of rain on the region, killing nearly two dozen and leaving catastrophic damage to property in its wake. 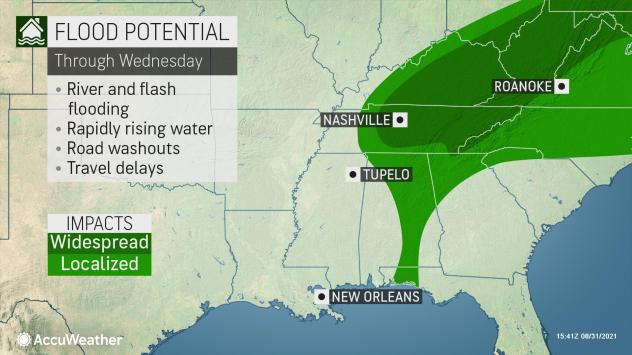 President Joe Biden declared a state of emergency for not just Humphreys County, but also Dickson, Hickman and Houston counties in Tennessee following the flooding.

In addition to the heavy rain in the Tennessee Valley, rain is also forecast to impact portions of the mid-Atlantic and the Northeast regardless of official designation by the National Hurricane Center.

"The same front that will be steering Ida eastward after it makes landfall will also merge with the tropical system. While it might be hard to find the center of Ida by the middle of the week, the transported tropical moisture will likely enhance rainfall from the Ohio Valley to the East Coast," said Pydynowski. 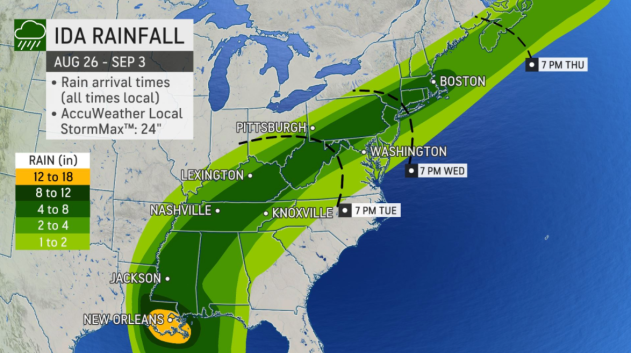 More than 4 inches of rainfall is forecast to expand from the Tennessee Valley into portions of the Northeast and southern New England.

While there have been no confirmed reports of tornadoes from Sunday, additional investigation into storm-damaged areas may say otherwise along the Gulf Coast. Monday was a different story as nine tornado reports were submitted to the Storm Prediction Center (SPC). One person was injured in Saraland, Alabama, when an eighteen wheeler was flipped over in a parking lot.

AccuWeather meteorologists warn that a continued risk of tornadoes will exists near and south and east of the track of the center of Ida through midweek.

Into Tuesday night, the tornado threat is expected to shift eastward and extend from eastern Alabama, middle Tennessee and northern Florida to the western portions of the Carolinas and southwestern Virginia. 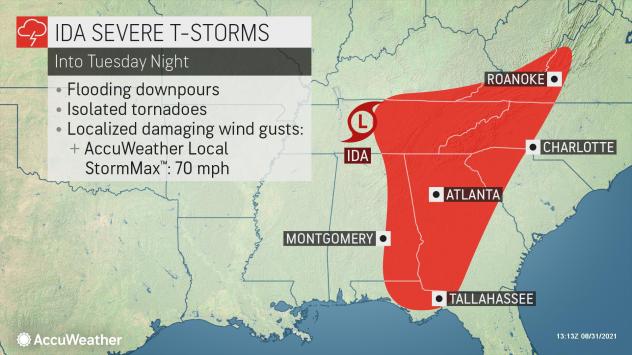 On Wednesday, severe thunderstorms, including the risk of tornadoes, is expected to extend from the Carolina coast, northward to Virginia and Maryland and perhaps Delaware and southern New Jersey.

Behind Ida, high pressure is forecast to move into the eastern U.S. later on Thursday, bringing drier conditions for those recovering from the hurricane's impacts. But, with more than 1 million people without power in the wake of Ida as of Tuesday, early September heat can make damage assessment and cleanup difficult and taxing without fans and air conditioners. Temperatures are forecast to climb well into the 80s to near 90 F through the Labor Day weekend in the hardest hit areas. AccuWeather RealFeel® Temperatures are likely to peak within a few degrees of 100 in the afternoon hours through Thursday. A bit of a break from the high humidity is anticipated in time for the weekend.

Ida made landfall as an extremely dangerous Category 4 hurricane, packing 150-mph maximum sustained winds, near Port Fourchon, Louisiana, at 11:55 a.m. CDT Sunday. Residents along the Louisiana Gulf coast are still cleaning up from last year's barrage of tropical landfalls. In preparation, mandatory evacuations were issued along parts of the Louisiana coastline.

Around 2 p.m. CDT on Saturday, Ida made a second landfall in the state southwest of Galliano, Louisiana. Maximum sustained winds at the time of the second landfall were 145 mph.

Ida first began as a tropical rainstorm in the western Caribbean on Thursday, Aug. 26, and quickly ramped up. Ida reached hurricane status Friday afternoon before making its first of two landfalls in Cuba. Once it emerged over the bath-warm waters of the Gulf of Mexico, it continued to intensify, and its maximum sustained winds were just 7 mph shy of Category 5 hurricane force when Ida struck the U.S.

To donate to those affected by Hurricane Ida, click here.