At least 22 people were killed when more than a foot of rain fell in just hours, causing a creek to rise and tear through the town of Waverly, Tennessee.

Frantic search and rescue efforts continued on Monday across the flood-ravaged Middle Tennessee region as many remained missing following a devastating flood event on Saturday.

As intense and relentless downpours persisted throughout much of the day on Saturday, homes were destroyed and roads were washed out, according to The Associated Press (AP). At least 22 deaths have been reported, according to the AP, while dozens remain missing.

Officials said Monday that telecommunication services were gradually being restored after the flooding damaged cell phone towers and knocked out telephone lines. More than 3,000 were without power on Monday.

Heavy rain started falling early Saturday in Humphreys County, which includes cities such as McEwen and Waverly. It was in this part of the county where the National Weather Service office issued a rare flash flood emergency. The Tennesse Emergency Management Agency said the bulk of the rain occurred in a six-hour stretch.

One of the worst-hit areas was Waverly, home to about 4,500 and about 75 miles west of Nashville. There, business owner Kansas Klein told the AP that it was "amazing" how quick the devastating flooding came and went. Klein noted that his business, a pizzeria, was still standing but had been rendered a total loss by the floodwaters that reached 7 feet inside the building.

“It was devastating: buildings were knocked down, half of them were destroyed,” Klein told the AP. “People were pulling out bodies of people who had drowned and didn’t make it out.”

Drone footage captured by storm chaser Brandon Clement showed the magnitude of the devastation around Waverly and just how powerful the raging floodwaters were. Some homes were knocked off foundations, while cars were flipped completely upright, or sent into nearby rivers. Massive mounds of debris were strewn around streets and creek beds. In one part of Waverly, only the smoldering wreckage of one home remained.

Hundreds of homes are said to be uninhabitable, The Tennesseean reported.

Schools will be closed this week in Humphreys County after 40 to 50 schools buses suffered damage, emergency management officials said.

Downpours persisted throughout the day and into Saturday night with rain finally subsiding in Middle Tennessee by midnight local time.

Tennessee Gov. Bill Lee visited some of the flood-ravaged areas on Sunday, meeting with affected homeowners and thanking first responders.

"Our hearts are with the many Tennesseans experiencing loss & heartbreak following yesterday's deadly floods," Lee said on Twitter. "The loss of life & property damage is devastating, & many of our neighbors are still missing. Please keep these communities in your prayers."

A staggering 17.02 inches of rain fell in McEwen, Tennessee, likely breaking the all-time 24-hour rainfall record for the state of Tennessee, according to the National Weather Service office in Nashville. Elsewhere, the city of Dickson, Tennessee, and a location just north of Centerville, Tennessee, picked up almost 10 inches.

"The slow-moving downpours over Middle Tennessee were due to a blocking pattern in the atmosphere with high pressure centered over Texas and low pressure over the mid-Atlantic," AccuWeather Senior Meterologist Tom Kines said. "These two features allowed storms to become stagnant over Tennessee on Saturday. There was also ample moisture due to humid air being ushered northward from the Gulf of Mexico into the Tennessee River Valley."

As torrential rainfall continued throughout the day on Saturday, the Piney River at Vernon, Tennessee, crested at 31.8 feet, shattering the river's previous record from 2019 by nearly 12 feet and towering 7 feet above major flood stage.

Roads and highways throughout Humphreys County were turned into rubble as large portions of asphalt were washed away, making rescue efforts more difficult for crews searching for any missing persons.

The Tennessee Department of Transportation urged travelers on Saturday to avoid heading through Humphreys, Houston, Dickson and Hickman counties, while the Tennessee Emergency Management Agency said a reunification center had been opened at McEwen High School. 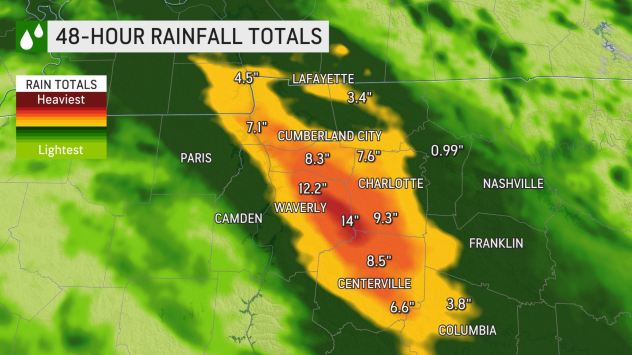 As of Sunday morning, river levels had fallen and floodwaters were receding as rescuers continued to search through the debris left behind by the storms.

The Tennessee National Guard was deployed to the region to help with rescue efforts and assist residents left reeling as a result of the flooding.

Weather conditions throughout the area should remain dry through at least Wednesday, according to AccuWeather forecasters. Conditions will be hot and humid as crews continue to search for any missing persons.