Residents and the mayor of Helmetta, New Jersey, tell AccuWeather that they were caught off-guard by the severity and speed of flash flooding from Henri.

Tropical Storm Henri prodded its way into the core of the Northeast after making landfall, slowing down to a swampy crawl and inundating the region with heavy rainfall into Monday.

By late Monday afternoon, Henri, which had been downgraded to a tropical depression, was slowly headed out to sea with a last round of rain for the Boston area and parts of New Hampshire.

The storm made landfall on Sunday in Westerly, Rhode Island, around 12:15 p.m. with sustained winds of 60 mph – tropical storm strength. Since then, the eighth-named storm of the year has been anything but in a hurry to work its way through Connecticut and Massachusetts, knocking out the power to over 115,000 customers at one point.

The bulk of Henri's heavy rain focused on the western side of the system, dousing New Jersey, Pennsylvania and New York while leaving some areas east of landfall, such as Massachusetts's areas of Cape Cod, Martha's Vineyard and Nantucket, relatively dry. 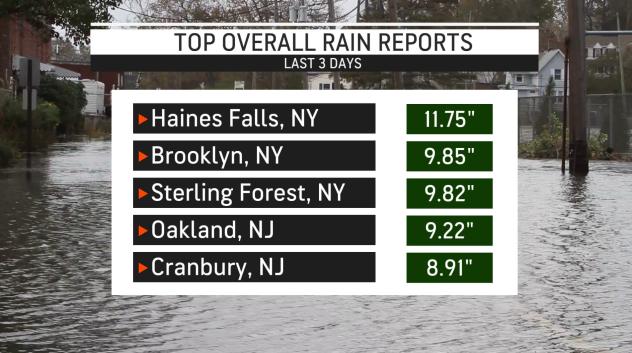 Even after being downgraded to a tropical depression on Sunday evening, Henri's heavy rainfall has triggered heavy flooding for many areas, particularly in New Jersey. Although the Garden State was spared from a direct strike, the soaking outer bands of the storm dumped as much as 8 inches of rain in some communities in the central portion of the state. According to The Associated Press, the intense flooding triggered the need for 86 water rescues in Newark, Public Safety Director Brian O'Hara said.

Before Henri's official arrival, the immense precipitation was already breaking records in places of New York. In New York City's Central Park, the daily maximum rainfall record was broken on Saturday after 4.45 inches of rain were recorded, most of which fell in a single two-hour period, the National Weather Service (NWS) said.

According to the New York City NWS, the 1.94 inches of rain that fell between 10 p.m. and 11 p.m. on Saturday made for the wettest hour in the history of the city. In total, Central Park tallied over 8 inches of rainfall from Henri.

The total damage and economic loss from Henri is estimated to be between $8 billion and $12 billion, according to AccuWeather Founder and CEO Dr. Joel N. Myers, who has been studying the economic impact of severe weather for more than 50 years.

Flooding and high winds across the Northeast as Henri advances

Henri made landfall in the northeastern U.S. on Aug. 22 as a tropical storm, bringing strong winds and heavy rain that led to wind damage and flooding in many areas.

The storm was rated a 2 on the AccuWeather RealImpact™ Scale for Hurricanes in the United States due to the rainfall, damaging winds and storm surge it unleashed across New England.

In Long Island, AccuWeather National Reporter Kim Leoffler spoke with vacationers and beachgoers who made the last-minute decision to head home before Henri’s arrival. Although the area avoided a direct strike, the intense rain and storm surge warnings would’ve certainly ruined any plans on the itinerary.

“Whenever you get a storm like this with higher tide and a full moon, you’ll get debris coming in,” Glen Baietti, lieutenant lifeguard in East Hampton, told Leoffler. “You could get hit by a log, you could be hit by anything. This is for people who are well-practiced in the ocean, not for people who are on vacation or anything like that. Anyone could be quickly overwhelmed.” 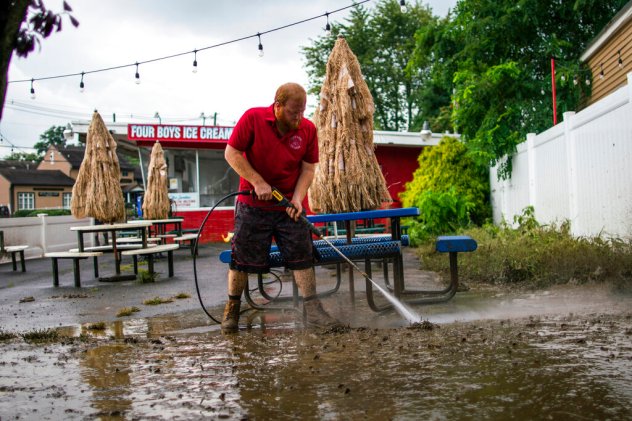 Away from the beaches, the risk of flash flooding still posed a major threat to those on Long Island. Officials on Saturday issued a voluntary evacuation notice, while concerts and restaurants made the decision to close early on Saturday ahead of the storm.

Some vacationers in Charlestown, Rhode Island, were left in a predicament on Sunday as the storm rolled in, leaving them without power. Ellen Scully told AccuWeather's Bill Wadell that the power in her vacation home had gone out as Henri impacted the coast.

“It’s a little crazy. The house was shaking,” she said.

Amy Snow was also vacationing in Charlestown when the power went out.

"We’re doing a lot of reading and I guess we’ll go to bed early because it will be dark," she told Wadell.

A travel ban was implemented by Connecticut Gov. Ned Lamont, on Interstate 95 for all empty tractor-trailers, tandem tractor trailers and motorcycles that began at 11 a.m. EDT Sunday. That ban was lifted early Sunday evening.

In Pawcatuck, Connecticut, one couple experienced a dangerous run-in with Henri after the storm caused a tree to fall on their home. While the home's roof was not crushed, the chimney on the side of the house did get knocked out, Wadell reported.

Very close call for a couple in Pawcatuck, #Connecticut after #Henri snapped this tree in their neighbor’s yard.

It knocked out their chimney but did not crash through the roof.

Officials are asking people to stay home and away from downed lines. @breakingweather #CTwx pic.twitter.com/42xxeMq0iW

Parts of New Jersey had already experienced half a foot of rain by Sunday afternoon. Video from Englishtown, New Jersey, showed a line of cars driving straight through a flooded street, before a vehicle eventually stalls and becomes stranded.

Henri also ruined many plans for a day at the ballpark. On Sunday, the Boston Red Sox announced they were pushing their weekend home game against the Texas Rangers back a day to Monday. In addition, the series finale between the New York Yankees and Minnesota Twins was rescheduled to Sept. 13.