Wrath of Ida to reach northeastern US with significant flood risk

Ida to carry drenching rainfall into the Northeast

Heavy, tropical rainfall is expected to pour from Ida as the system moves through the Tennessee Valley and into the mid-Atlantic and Northeast.

Heavy rain associated with Tropical Rainstorm Ida was already wreaking havoc across the Northeast Wednesday morning, with reports of flash flooding emerging from areas from Pittsburgh to the nation's capital.

Ida was downgraded to a tropical rainstorm around 11 a.m. EDT Wednesday as what was left of the former hurricane drifted across West Virginia and northwestern Virginia. The system was moving rapidly at a speed of 25 mph and had maximum sustained winds of around 30 mph.

Flood watches stretched from parts of North Carolina to Maine Wednesday, with flash flood warnings in place across parts of West Virginia and Southwestern Pennsylvania.

At one point, at least 80 million Americans who live along a 1,200-mile stretch of the U.S. were under a flash flood watch. Many major metropolitan areas, including Boston, New York City, Philadelphia and Washington, D.C. were included. 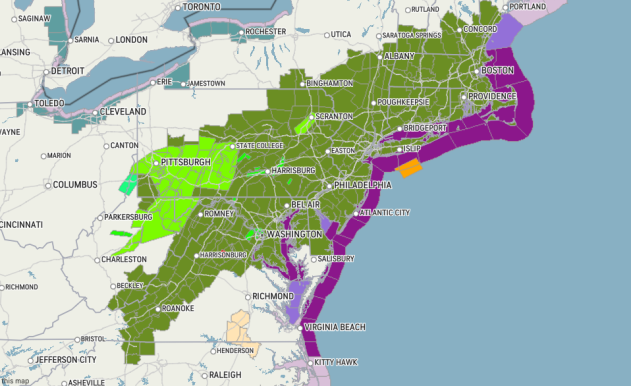 Even after Ida moves off the New England coast later Thursday, residents across the Northeast may still feel the storm's wrath in the days that follow.

"There is going to be some interaction with Ida and an approaching dip in the jet stream in the northeastern United States," AccuWeather Chief On-Air Meteorologist Bernie Rayno said, adding that this could cause the air pressure at the center of Ida to drop. The intensification could lead to even heavier rainfall across parts of the area.

That interaction will unleash tremendous rainfall and will even compensate for a swift, steady forward movement of the storm. Flash flooding has already begun in urban areas and along small streams, and the threat will evolve to flooding of larger rivers over time. In some of the largest rivers, waters may not crest for days after Ida has departed.

"Many areas along the path of Ida from the central Appalachians as well as parts of the mid-Atlantic and southern New England are likely to have rounds of rain over a 12- to 18-hour period, but intense rainfall can last six to eight hours," AccuWeather Senior Meteorologist Dan Pydynowski said. 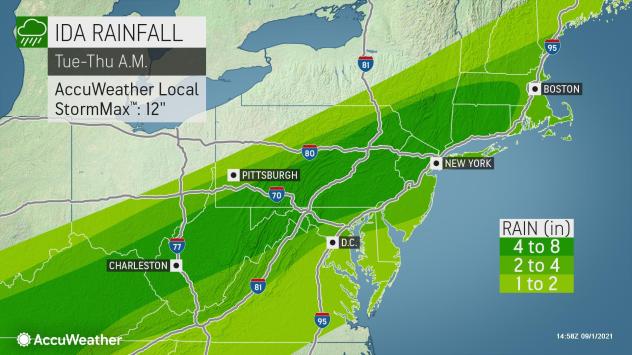 "During that six- to eight-hour period, rainfall rates of 1-2 inches per hour can occur, which is enough to trigger flash urban and small stream flooding even where dry or average soil moisture is present," Pydynowski explained.

Many locales across the Northeast have already had a wet end to the summer. Rainfall during August has been above average to excessive in the same areas of the Northeast that Ida is forecast to impact. One and a half to three times the normal monthly rainfall has fallen in the corridor that will experience Ida's torrential rain.

In some areas, the excessive rainfall was due to the impacts of Tropical Rainstorm Fred and/or Tropical Storm Henri in prior weeks, but in other areas, an almost daily dose of pop-up showers and thunderstorms has drenched and saturated the landscape. 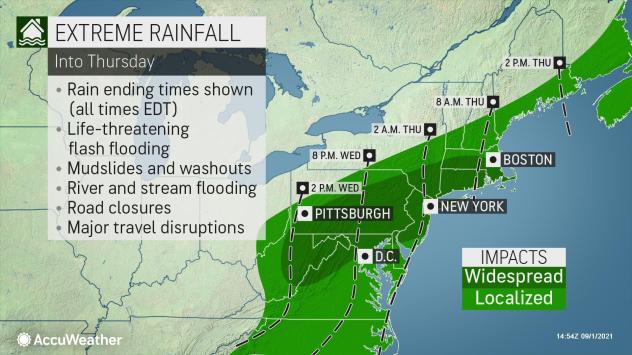 The action of pop-up drenching thunderstorms will continue in some locations, even ahead of Ida's arrival. These pre-Ida downpours can lead to incidents of flash flooding and travel disruptions. 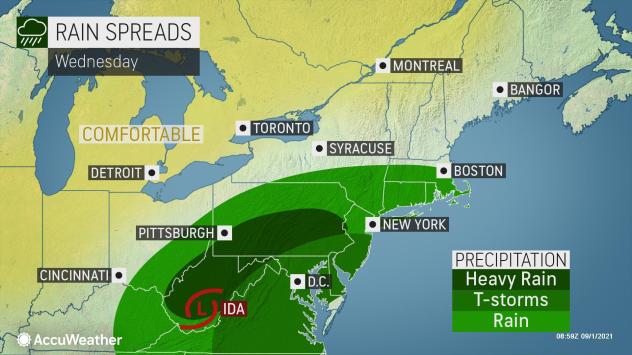 The combination of saturated ground, hilly terrain and extensive paved surfaces will lead to significant runoff from through Thursday as Ida arrives and rolls through and interacts with the non-tropical system.

Later, significant rises on larger streams and the major rivers seem likely in Ida's path. Some of the rivers that are expected to experience a significant water rise with the risk of major flooding include the lower portion of the main stem of the Susquehanna, Delaware, Lehigh, Schuylkill, Juniata, Conemaugh, Passaic, Raritan, Potomac, Monongahela, Youghiogheny and Kanawha. 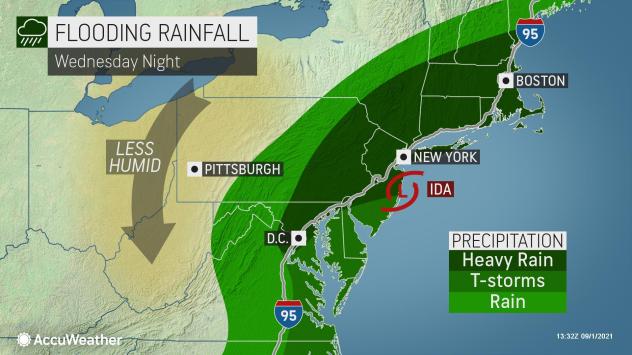 In portions of the central Appalachians and the mid-Atlantic, there are some similarities to the current forecast and events that unfolded in the late summer of 2011, when back-to-back tropical systems, Hurricane Irene and Tropical Storm Lee, triggered torrential rainfall and major flooding, AccuWeather Senior Weather Editor and meteorologist Jesse Ferrell said.

"In 2011, after Hurricane Irene and Tropical Storm Lee drenched Pennsylvania, the flooding on the Susquehanna River was the highest since Hurricane Agnes in 1972 in Harrisburg, Pennsylvania," Ferrell stated.

With more than a foot of rain from Tropical Storm Lee alone, part of downtown Harrisburg and the town of Hershey, Pennsylvania, were inundated.

AccuWeather meteorologists are expecting a sharp edge to the rain in this case. In 2011, torrential rain from Lee spread across much of northern New York state and part of northern New England. In the situation with Ida this week, little rain is forecast in comparison. 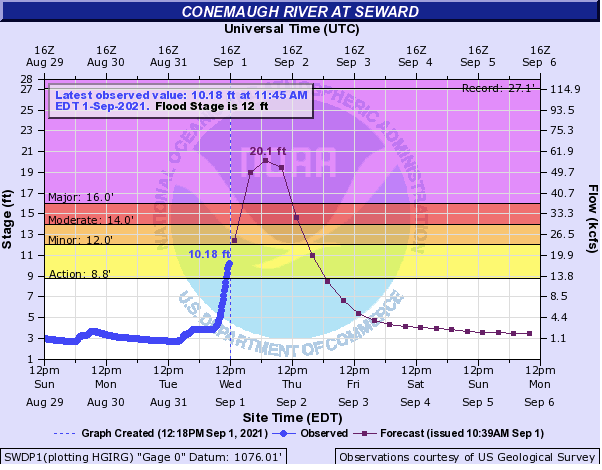 This image shows the predicted water level of the Conemaugh River at Seward, Pennsylvania, based on National Weather Service hydrological information as of 12:18 p.m., Wednesday, Sept. 1, 2021. The predicted level is subject to change based on additional rainfall data. (NWS)

The National Weather Service (NWS) river gauge forecast, which may not yet account for all of the predicted rainfall from Ida, shows the Conemaugh River at Seward, Pennsylvania, and the Juniata River near Williamsburg, Pennsylvania, both surpassing major flooding stage Wednesday night. At Williamsburg, that's higher than the river rose in 2018. At Seward, that reading would be close to the level reached in January 1996. As of Wednesday morning, major flooding is now projected by the NWS for Wednesday night and early Thursday at various points along the Monongahela River in southwestern Pennsylvania.

People living along unprotected areas of small streams and rivers will need to keep a watchful eye and heed advisories from officials as they are issued. Removal of debris along small streams and city streets ahead of the heavy rainfall might reduce the risk of flooding.

AccuWeather forecasters urge people to avoid camping along small streams and to avoid attempting to drive through flooded roadways. It could be a life-saving move to find alternative routes and avoid areas prone to flooding at times of heavy rain, such as underpasses and low-lying roads along small streams. In hilly terrain, there is also the potential for road washouts, mudslides and rock slides. 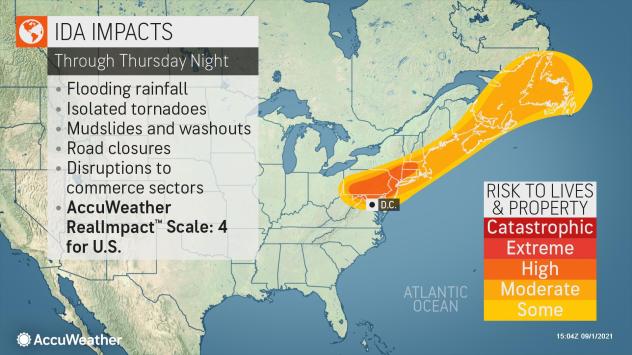 And to make matters worse, flooding is not the only concern from Ida in the Northeastern states. Severe thunderstorms have the potential to produce isolated tornadoes in the mid-Atlantic region into Wednesday night, forecasters say.

AccuWeather will continue to provide updates on Ida as this dangerous tropical rainstorm continues to move through the northeastern U.S.