AccuWeather's Jillian Angeline was live in hard-hit Cruso, North Carolina, on Aug. 19, where at least two people were killed by severe flooding from Tropical Storm Fred and 20 remain missing.

Fred never needed to reach hurricane status to make a splash in the Southeast. Hundreds of miles inland from where the system crashed ashore, what was left of the storm wreaked havoc in the form of tornadoes, power outages and, in one area, a completely flooded town. And Fred's wrath was hardly over as much of the Eastern Seaboard felt the system's sting.

In North Carolina, the town of Candler may be 500 miles northeast of where Fred made landfall in Cape San Blas, Florida, but like much of the rest of the Southeast, the impacts there have been just as extreme.

"It was like a whole bunch of cars were going through, everyone was going through, but see now I got stuck," Andrew Nesbitt, a driver whose car got stranded in floodwaters, told AccuWeather.

AccuWeather National Reporter Jillian Angeline said that other residents have told her this is the worst flooding they've seen in years. Much of that flooding is stemming from an overflow of the Pigeon River, which crested at 15.75 feet on Wednesday morning. 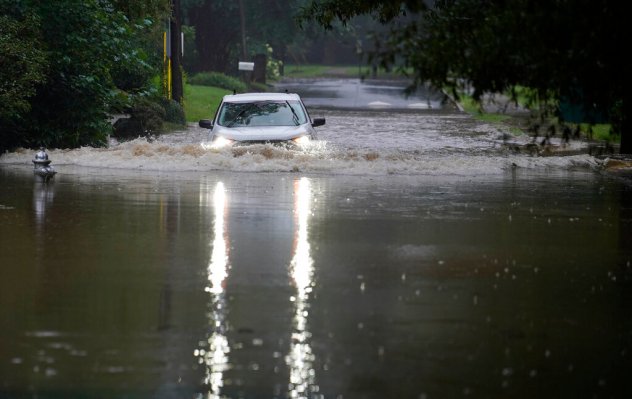 A car attempts to drive through floodwaters near Peachtree Creek near Atlanta, as Tropical Storm Fred makes its way through north and central Georgia on Tuesday, Aug. 17, 2021. (AP Photo/Brynn Anderson)

That ranks as the sixth-highest gauge height in the history of the river and, for reference, nearly 6 feet higher than its minor flood stage level.

Fred, which made landfall on the Florida Panhandle just 9 mph shy of Category 1 hurricane strength, packed 35-mph winds on Wednesday as the disorganized system paraded through the Appalachians.

Widespread heavy rain and localized severe flooding occurred throughout the Southeast, and Fred left a soggy disaster in some communities in its wake.

In Balsam Grove, located in southern North Carolina by the borders of Georgia and South Carolina, AccuWeather's Reed Timmer captured aerial footage of deep floodwaters leaving what appears to be the entire town underwater.

Near Candler, the Asheville Fire Department has spent much of the week performing swift-water rescues, responding to trees falling on homes and urging residents to stay in their houses.

"The big thing now is to try and stay home if you can," Landon Davis, Acting Battalion Chief of the Asheville Fire Department, told Angeline. "Don’t go through floodwaters; stay out of them. Don’t go around barricades and try to stay home."

More than 9 inches of rain fell in Haywood County in less than 48 hours, WRAL reported, leading to life-threatening flash flood dangers in the Asheville metropolitan area, particularly for people who lived along Pigeon River. At least two people were confirmed dead after of the flooding, The Associated Press reported. Their identities have not yet been released. According to AccuWeather's Jillian Angeline, about 20 people are missing across Haywood County as of Thursday afternoon, county officials said. The search is ongoing.

The most extensive rain from Fred fell in the western half of the state, where over 15 inches was recorded in multiple areas. 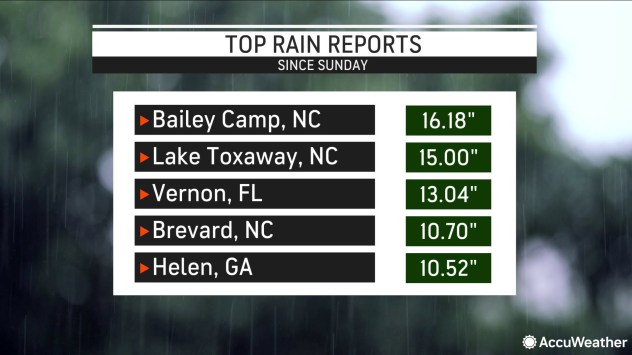 Farther south, the intense rain was not only disastrous but also deadly in Florida and Georgia, as the life of a Las Vegas visitor was claimed when his car hydroplaned in Panama City, Florida, on Monday night. The out-of-control vehicle flipped into a ditch filled with water, the Florida Highway Patrol said according to The Associated Press.

Between North Carolina, South Carolina and Georgia, nearly 20 tornadoes were reported Monday night into Tuesday according to the Storm Prediction Center (SPC). At least two twisters touched down in Georgia, where they destroyed a mobile home, ignited a destructive fire at a barn and downed numerous power lines.

In South Carolina, downed trees and strewn power lines were commonplace in areas such as Newberry County and Lexington County. In all, tens of thousands of residents have dealt with power outages in the days since Fred's landfall, stretching from northern Florida to the East Coast states.

Flooding and several possible tornadoes were linked to what was left of Fred after the system passed through the region from Wednesday into Thursday. In west-central New York, a state of emergency was declared in Steuben County, after heavy rain inundated the region.

According to the Democrat & Chronicle, the state of emergency covered nine towns that suffered flooding damage. In some areas, flooding washed out roads and went inside the lower levels of homes. Roughly 75 to 100 people were evacuated from their homes.

In Pennsylvania, storm surveys were underway to investigate possible tornado damage in Montgomery, Bucks and Berks counties after severe thunderstorms ripped through the southeastern part of the state. A storm survey was also ongoing in parts of Morris County, New Jersey.

As of Thursday evening, results of the surveys had been released.

In Berks County, an EF-1 tornado with peak winds of up to 95 mph was confirmed in Tilden Township in the town of Hamburg.

An EF-1 tornado also traveled from Souderton in Montgomery County to Silverdale and the Perkasie area in Bucks County.

In New Jersey, an EF-0 tornado touched down at around 2:30 early Thursday morning in Rockaway in Morris County.