The northern Gulf Coast will be at risk for life-threatening storm surge and potent winds as slow-moving Sally moves ashore early this week.

AccuWeather forecasters on Tuesday increased total rainfall projections for Hurricane Sally, saying the storm could unleash up to 30 inches of precipitation on parts of the Gulf Coast. The increase in the amount of forecast rainfall was due to the storm's decreased forward speed. Monday night into Tuesday Sally had crawled to a pace of just 2 mph as it inched closer to land. Sally was still moving slowly early Wednesday morning, at just 3 mph.

The storm was already kicking up a significant storm surge in some places along the coastline in Louisiana and caused flooding in Alabama.

On Monday evening, Hurricane Sally achieved Category 2 status with maximum sustained winds reaching 100 mph, but the storm lost some wind intensity early Tuesday morning and was downgraded to a Category 1 storm. As of 9 p.m. EDT, Sally had sustained winds of 85 mph.

However, Sally managed to restrengthen early on Wednesday morning as the circulation tightened while drifting northward toward land. As of 5 a.m. EDT, Sally had reattained Category 2 status, with maximum sustained winds at 105 mph. Sally made landfall near Gulf Shores, Alabama, around 5:45 a.m EDT.

As a consequence of the slow-moving hurricane, waves and rain will batter the immediate coast for an extended period with long-duration storm surge flooding.

With the commencement of the northward drift occurring slightly ahead of schedule, landfall occurred slightly farther to the east and has forced a significant storm surge into Pensacola Bay, Florida, more so than Mobile Bay, Alabama. 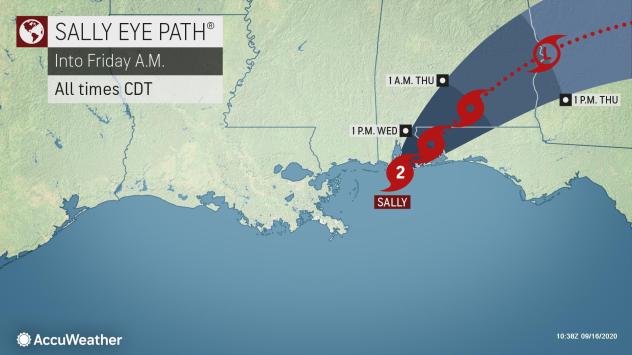 Gulf Coast residents were rushing preparations to completion on Monday as the region braced for another hit from a hurricane — a little over two weeks after Laura’s devastating blow to areas over western Louisiana and the upper Texas coast. Forecasters noted that New Orleans will avoid the majority of the impacts from Sally, due to an eastward shift in the storm's track. The National Hurricane Center (NHC) discontinued hurricane warnings and then later dropped tropical storm warnings on Tuesday for Lake Pontchartrain, Lake Maurepas, and metropolitan New Orleans.

Hurricane warnings were in effect from the Mississippi/Alabama line, to the Okaloosa/Walton County line in Florida, which is located east of Pensacola. Tropical storm warnings extend east of the Okaloosa/Walton County line to eastward to Indian Pass, Florida, a coastal town more than 150 miles east of Pensacola. In addition, tropical storm warnings are in effect from the Mississippi/Alabama border to the Mouth of the Pearl River.

Storm surge warnings, which indicate the danger of life-threatening inundation, were posted from Fort Morgan, Alabama to the Walton/Bay County line in Florida.

Because of the coastal flooding and inland flooding impacts combined, AccuWeather meteorologists have rated Sally a 2 on the AccuWeather RealImpact™ Scale for Hurricanes. 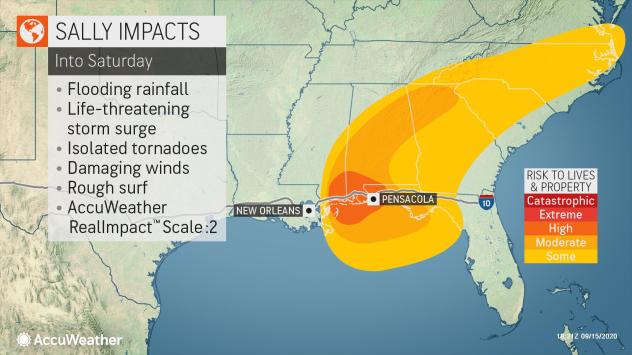 The AccuWeather RealImpact™ Scale for Hurricanes is a 6-point scale with ratings of less than one and 1 to 5 that was introduced by AccuWeather in 2019 to rate tropical systems based on multiple impacts, rather than just wind, like the Saffir-Simpson Wind Scale does.

State of emergency declarations have been issued by Louisiana Gov. John Bel Edwards, Mississippi Gov. Tate Reeves and Alabama Gov. Kay Ivey prior to Sally closing in on the region. Mandatory evacuations have been ordered in low-lying areas of Mississippi and Louisiana, including for areas outside of New Orleans levee system. Officials closed Alabama beaches effective at 3:00 p.m. Monday, and Ivey recommended evacuations for flood-prone areas south of Interstate 10.

Sally was the earliest named "S-Storm" to ever form in the Atlantic Ocean basin, beating out 2005's Hurricane Stan which was named on Oct. 2.

In less than 24 hours, Sally went from being a mass of showers and thunderstorms east of the Bahamas on Friday afternoon and to a tropical depression on Friday evening, before becoming a tropical storm on Saturday afternoon.

Torrential rain fell across South Florida as the tropical disturbance passed through. Marathon and Key West, Florida, both set preliminary daily and monthly rainfall records, with 8.13 inches and 9.37 inches falling, respectively, on Saturday.

Impacts from Sally will range from strong winds to heavy, flooding rainfall and dangerous storm surge.

Widespread wind gusts of 40 to 60 mph are expected from the central Florida Panhandle to the Mississippi Panhandle. The strongest, and most damaging, winds are likely to be near or east of the anticipated landfall on the immediate coast. 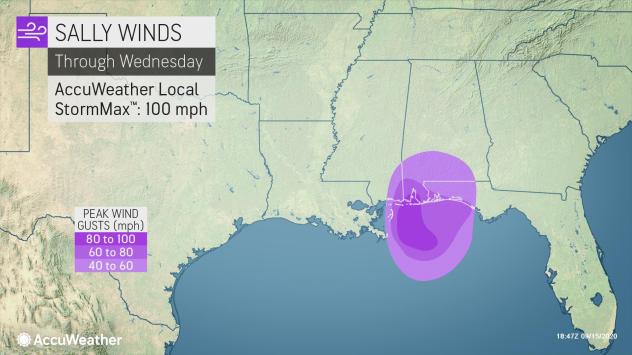 An AccuWeather Local StormMax™ wind gust of 100 mph is possible near the track of the center of the storm.

Near the center of the storm, and to the east, is also where the greatest coastal inundation is expected with Sally. 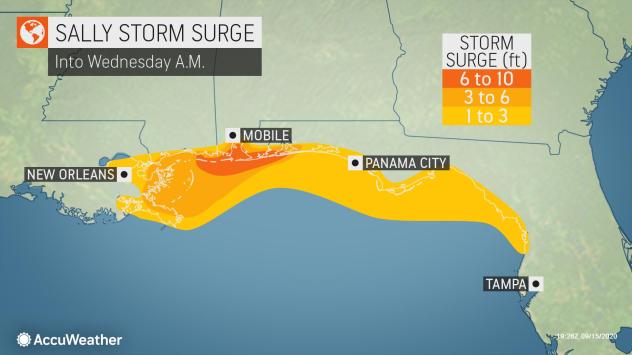 Storm surge of 6-8 feet is anticipated in along coastal portions of Mississippi and Alabama, while storm surge of 1-3 feet extends all the way through the Florida Panhandle.

There is also the potential for brief tornadoes and waterspouts to spin up near and east of the center of the storm as it crawls inland. On Tuesday morning, tornado watches were issues by the National Weather Service for coastal Alabama and the western half of the Florida Panhandle.

AccuWeather meteorologists expect Sally to take a slow curved path to the northeast and then the east over the Southern states through the end of this week. 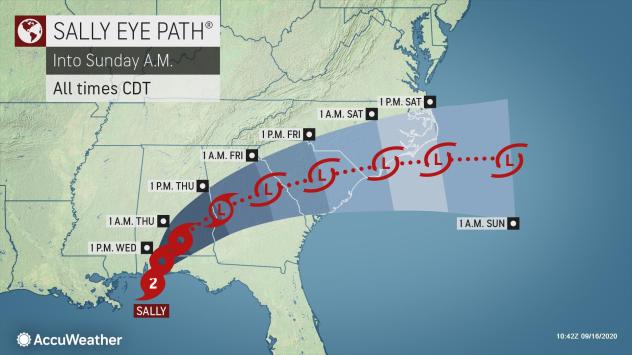 After moving inland, the storm will lose wind intensity, but continue to pull moisture northward into the Deep South.

Downpours are expected to spread across the interior South into the end of the week with an AccuWeather Local StormMax™ rainfall of 30 inches near and just northeast of where the center of the storm moves in from the Gulf coast.

Significant, life-threatening flash flooding is possible due to such high rainfall amounts. Roads may become impassable and some communities may become cutoff from first responders and medical services for a time. 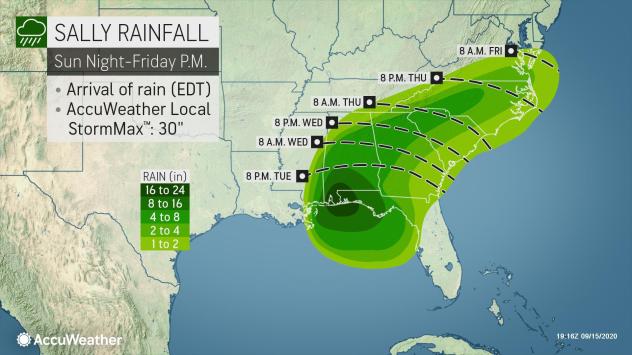 "Rivers will be on the rise in the region, especially in portions of Mississippi and Alabama, where torrential rainfall will spread slowly inland," AccuWeather Senior Meteorologist Alex Sosnowski said.

Mary Esther/Hurlburt Airport, Florida had received more than 14.50 inches of rain as of 7 a.m. EDT Wednesday from the storm.

AccuWeather meteorologists said that natural gas and oil production is expected to be shut down in the north-central Gulf until Sally departs the region and moves onshore, but the majority of the rigs are located farther west, over the western Gulf of Mexico.

And Sally wasn't the only system that meteorologists are busy monitoring. Monday was the first time that five tropical cyclones, including Paulette, Rene, Sally, Teddy and Vicky, could be seen swirling simultaneously in the basin since such a phenomenon occurred back on Sept. 10-12, 1971, the NHC confirmed on Monday. 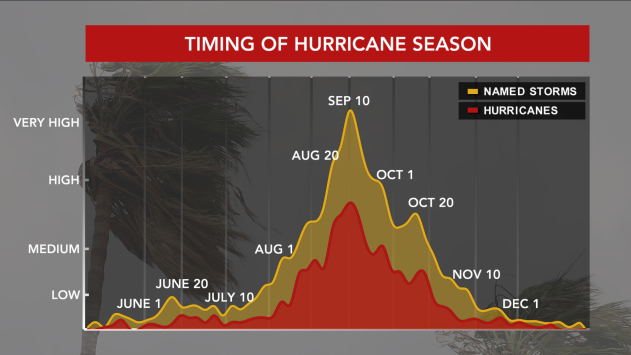 Hurricane season does not officially end until the end of November, and forecasters say that named systems could emerge into December this year.