The cyclonic storm was blamed by local authorities for at least one death on Monday as it triggered flooding and landslides. And the worst of the storm may still be yet to come.

Heavy downpours of rain in 72 hours caused major flash flooding in Sicily, Italy, where vehicles were swept away and some people needed to be rescued from the floodwaters.

A potent storm system known as a "medicane" has been wreaking havoc for days across portions of southern Italy, and AccuWeather meteorologists say the worst may be yet to come.

On Tuesday, the storm had already triggered flash flooding and mudslides and was even blamed for two fatalities. In the town of Gravina, Italy, a 53-year-old man was found under his car after heavy rains soaked the region, according to a report from Reuters. Additionally, the body of a 67-year-old man was recovered on Monday in Catania, Italy, after his car was trapped by mud and rising floodwaters. The man's wife was also reported missing, according to Reuters.

On Tuesday alone, over 600 rescue operations were carried out in Catania, according to CNN.

Other portions of Catania, a port city on the east coast of Sicily, were also underwater on Tuesday. Videos shared on social media showed cars, vans and city buses attempting to navigate through floodwaters and leaving waves of water in their wake near a popular piazza.

Catania's Garibaldi hospital reportedly was forced to evacuate a few select buildings as a result of the flooding, according to the Italian newspaper La Repubblica.

Medicane is an informal name for a non-tropical storm that moves over the Mediterranean Sea and gains some tropical characteristics as it strengthens over the warm water. Medicane is a combination of the two words "Mediterranean" and "hurricane."

The current storm first entered the Mediterranean Sea early this week. Periods of rain began as early as Sunday for some portions of Sicily, but heavier rainfall across the region began on Monday for many across both Sicily and Calabria.

Sicily's farmer's association said around 11.8 inches of rain fell near Catania during several hours on Sunday, according to Reuters. That amount is nearly half of the island's average yearly rainfall.

The storm lost some wind intensity late Monday but began to restrengthen on Wednesday as it churned northward at a snail's pace. Regardless of the storm's ultimate strength, the main impact for portions of Italy will continue to be rounds of heavy rainfall. 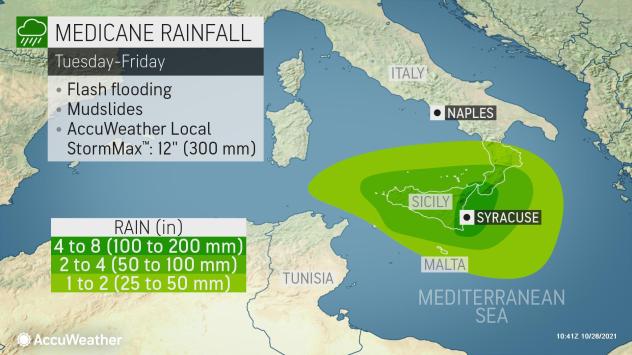 Widespread rainfall amounts of 2-4 inches (50-100 mm) are forecast to fall across the entirety of Sicily and southern portions of Calabria, with 1-2 inches (25-50 mm) of rain expected for the rest of Calabria.

Forecasters say a bull's-eye for heaviest rainfall from the storm will be located over the eastern Sicilian coast and far southern Calabria.

"Through Friday, 4-8 inches (100-200 mm) of rain will fall across eastern Sicily and the far southern tip of Calabria with the AccuWeather Local StormMax™ of 12 inches (300 mm)," AccuWeather Meteorologist Tony Zartman said.

Any additional rainfall will work to worsen ongoing flooding issues across southern Italy. In mountainous areas, days of steady rainfall may work to loosen soil and lead to additional landslides.

Forecasters say residents who live in lower-elevation areas or flood-prone zones should have an emergency plan in place in case evacuations are necessary. Floodwaters can rise rapidly, especially if flood-control systems are already overwhelmed.

In addition to the heavy rainfall, gusty conditions can develop as the storm strengthens at midweek.

"Wind gusts up to 60 mph (100 km/h) will occur across Sicily and Calabria through Friday with an AccuWeather Local StormMax™ of 80 mph (130 km/h)," Zartman said.

This week's medicane is forecast to push away from southern Italy by the weekend and finally give the waterlogged area a chance to dry out.

Why does the first chill of the season feel so cold?
What to spray on your jack-o'-lantern to keep it fresh till Halloween
AccuWeather's 2021-2022 Europe winter forecast
Explorers become 1st ever to reach bottom of mysterious 'Well of Hell'