Winter storm watches, warnings in effect for 9 states ahead of cross-country snowstorm

Snow totals in some places could be as high as 12 inches or more. Regardless of accumulations, the storm will be a jarring turnaround from recent weather across the western and central parts of the nation.

The start of a cross-country storm could end in feet of snow, but it will begin with inches of much-needed rain in drought-stricken portions of the Southwest.

A 1,000-mile stretch of the United States was on notice for what will be the first round of heavy snow of the season for areas from the Wasatch Range in Utah to the states surrounding Lake Superior in the Upper Midwest. On Thursday, winter storm warnings and watches were in effect across parts of nine states as the wintry storm was beginning to take shape over the western U.S.

On the heels of an abnormally warm October and November in the western and central U.S. regions, the weather whiplash could result in multiple feet of snow in some areas.

Even though the storm is not likely to evolve into a bomb cyclone as some have done earlier this fall in the West, it is likely to become strong enough to bring the first general heavy snow of the season over many mountain ranges of the West, including the Colorado Rockies and Wasatch Range. 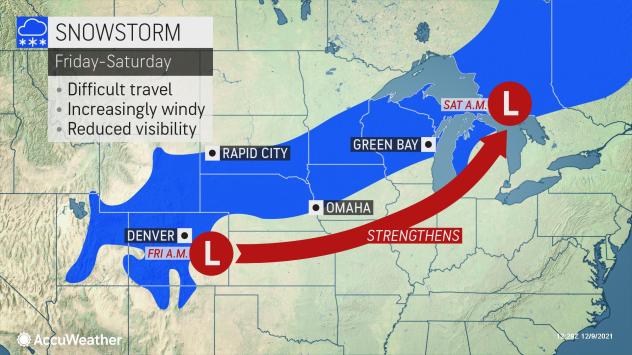 "One to 2 feet of snow is expected across the high terrain, with an AccuWeather Local StormMax™ of 4 feet expected in some of the highest mountains," AccuWeather Meteorologist Brandon Buckingham said.

A heavy rate of snow in the Wasatch Range and Rockies is likely to slow travel over the higher terrain along I-25, I-70 and I-80 in parts of Utah, Colorado and Wyoming into early Friday. Cross-country shipping and trucking interests may want to consider a more southern route, if possible, according to forecasters.

However, the snow will be a tremendous boon to the ski industry, which has faced setbacks without fresh powder so far this season. The winter precipitation will also be a boost for the drought when the snow melts later in the winter and spring. As of early December, drought conditions varied from moderate to extreme and exceptional levels across Colorado and Utah, according to the U.S. Drought Monitor.

Salt Lake City’s snow drought has come to an end with snow piling up on Thursday. But, Denver’s snowfall may fall short of the amount needed to be considered measurable snow, since the storm will track north and west of the city. All that is needed is a mere 0.1 of an inch of snow to fall to end the snow drought, but there is a chance that only a few flurries may occur. Accumulating snow is much more likely in the foothills to the west of the Mile High City. The all-time record was set more than 130 years ago when it did not snow for 235 days in a row spanning March 5 to Oct. 25, 1887. The 2021 season already hit the benchmark of latest first measurable snowfall on record, and the snowless streak stood at 231 days as of Dec. 8. 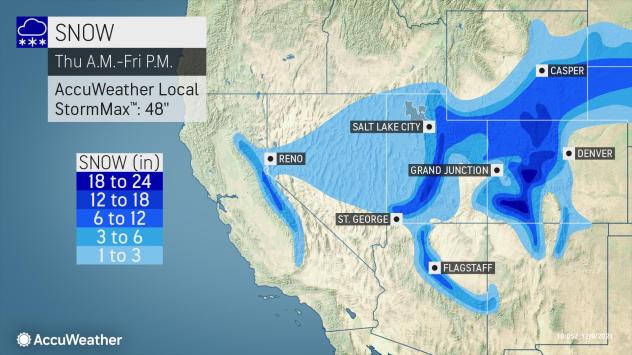 Snow was falling on the Sierra Nevada on Thursday with a general few inches forecast and local amounts to near 1 foot. Motorists venturing over Donner Pass, California, along Interstate 80 may encounter slippery road conditions and delays into Thursday night. A period or two of snow will also bring several inches to the mountains in northern Arizona from Thursday night to early Friday, meteorologists say. Wyoming was already seeing impacts on its roads on Thursday as the snowstorm began to take shape, hampering roadway visibility near Bear River Drive on I-80 in Evanston, Wyoming. 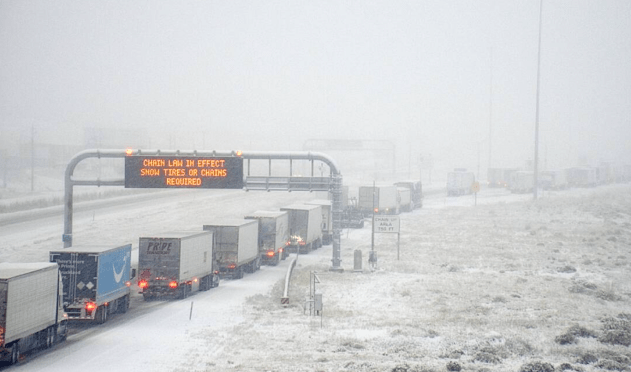 Tractor-trailers were backed up on I-80 in Wyoming on Thursday, Dec. 9, as a major snowstorm began taking shape. (Wyoming Department of Transportation)

It will be too warm for snow to fall in low elevations of the Southwest, but a combination of gusty winds and rain showers are expected to sweep through areas from Colorado and Nevada Thursday, to Arizona Thursday night, and New Mexico Friday.

"Where it rains a bit for the first time in many weeks, the combination of moisture and oil deposits on the roads can make for extra slick conditions," Buckingham said. Los Angeles, Phoenix and Las Vegas are a few cities where motorists should use caution during the onset of the showers. 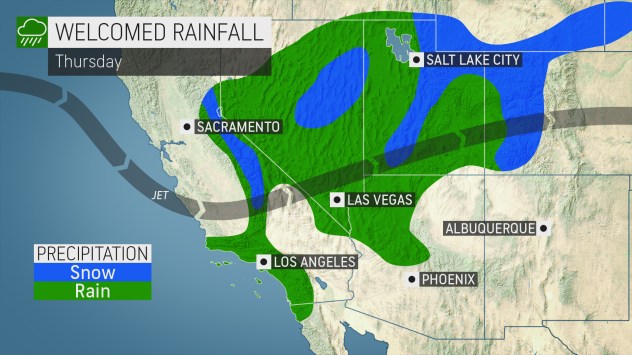 Even where little or no rain falls, locally gusty winds can kick up dust. Crosswind gusts frequenting 40-60 mph with a few gusts topping 70 mph with an AccuWeather Local StormMax™ of 90 mph can be a concern for motorists and cause difficult handling of trucks, busses and trailers from the California deserts to portions of southern Nevada, Arizona and New Mexico into Friday. 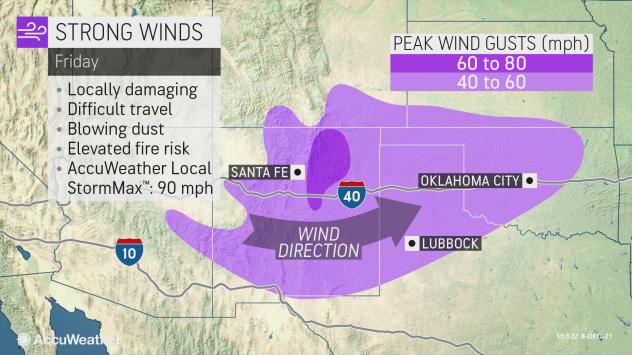 As the storm departs the Rockies and heads across the Plains Friday, a large band of heavy snow is forecast to spread northeastward from eastern Wyoming and northern Colorado to northern Michigan.

There is the potential for 6-12 inches of snow to accumulate and cause difficult travel along a 1,000-mile-long swath from early Friday to early Saturday over the Central states, Buckingham explained. The exact track of the storm will determine where the band of snow develops, and it's possible that forecasters will shift it somewhat to the north or south in the coming days.

Travel during and shortly after the storm can be difficult over portions of I-29 I-80, I-90 and I-94 late this week and into the weekend over the Great Plains. 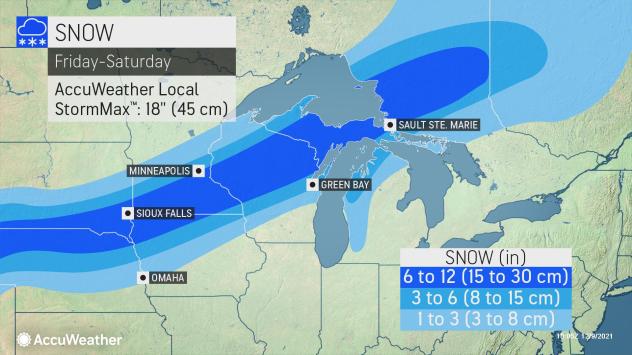 "Gusty winds on the back side of the storm can lead to blowing and drifting snow over parts of the central and northern Plains during Friday night and Saturday," Buckingham said.

There will be a major temperature contrast across the region as the storm pushes through the Central states. At this time, Chicago, Detroit, St. Louis and Kansas City, Missouri, are likely to remain on the warmer and rainy southern and eastern flank of the storm, but Minneapolis could be near the northern edge of the heaviest snow. Parts of southern Minnesota and central Wisconsin have the potential to top 12 inches of snow from the storm. While temperatures are forecast to hover in the 20s and lower 30s F around Minneapolis Friday, highs are forecast to reach the 70s in St. Louis, where the daily record of 73 set in 1889 will be challenged.

AccuWeather meteorologists say there is the likelihood for another round of severe weather on the warmer side of the storm across portions of the Mississippi, Ohio and Tennessee valleys late this week and this weekend. That round will follow an outbreak that unfolded Sunday into Monday and triggered approximately 80 reports of severe weather, including six reports of tornadoes. An EF1 twister touched down in Stamping Ground, Kentucky, and caused severe damage in the rural community Monday. 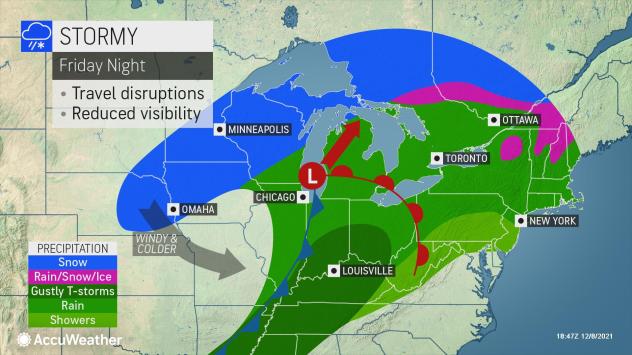 There is at least the potential for the situation to escalate to a threat that includes high winds, flooding rain and tornadoes from Friday night to Saturday as the storm's cold front advances eastward across the Mississippi, Ohio and Tennessee valleys.

Even in areas outside of where thunderstorms turn severe, drenching rain and the risk of brief localized flash flooding are likely to occur in portions of the Ohio and Tennessee valleys as well as lower portions of the Mississippi Valley late this week and into the weekend, AccuWeather Senior Meteorologist Brett Anderson stated.

The storm will move on and bring mostly rain and gusty thunderstorms to the Northeast during the first part of this weekend. However, the air may be cold enough in a few pockets as a patch of moisture precedes the storm late Thursday and Thursday night. 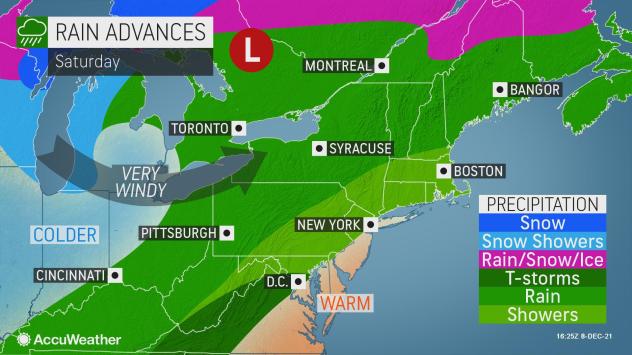 As the storm tracks toward the upper Great Lakes and into northwestern Ontario this weekend and southerly winds kick in, warm air may be pulled into the zone from Washington, D.C., to Philadelphia and New York City. Some long-standing daily record highs could be challenged Saturday. A high of 64 F is forecast for the Big Apple on Saturday, which would tie a record that has stood on the date since 1879. Highs may climb into the 70s, breaking record highs set during the 1970s in Philadelphia and Washington, D.C., on Saturday.

The pattern could set a trend for the coming weeks with frequent storms and cold air across the West, rounds of severe weather and temperature swings in the Central states and frequent warmth in the East, AccuWeather forecasters warn.