Brace for delays and disruptions. That's the message from AccuWeather forecasters as an active weather pattern in the days ahead of Thanksgiving could result in travel nightmares.

Experts say there are several scenarios for the storm that could potentially disrupt millions of Thanksgiving travelers in portions of the Midwest, Great Lakes, mid-Atlantic and Northeast.

With the clock ticking and many preparing to get a head start on travel ahead of Thanksgiving, AccuWeather forecasters are warning Americans may want to brace for delays and disruptions caused by the weather -- potentially triggering "a huge mess" -- as they head out on Thanksgiving journeys.

Travel for Thanksgiving is expected to reach nearly pre-pandemic levels this year, according to AAA, and the repercussions of any storm that may develop in the days ahead of the holiday, AccuWeather forecasters warn, could be far-reaching and have lingering effects on the Wednesday before Thanksgiving, which is considered one of the nation's busiest travel days of the year.

There are two major weather players that could conspire to wreak havoc across parts of the Midwest and Northeast: a wintry storm that will develop over the Great Lakes on Sunday and then a storm that will develop off the Atlantic Coast a day or two later. There are still a range of scenarios AccuWeather forecasters are considering on how the coastal storm will behave. Precipitation will come in the form of rain or snow depending on location, but the Interstate 95 corridor of the Northeast will likely see only rain.

"We could be looking at a huge mess and a real wrench in holiday travel," AccuWeather Chief Meteorologist Jon Porter said.

The first storm will organize over the central Plains Sunday and then track northeastward toward the Great Lakes Monday, and into central Ontario or western Quebec Tuesday. As the storm makes that trek, it is likely to strengthen rapidly enough to be classified as a bomb cyclone as the central pressure of the storm could plummet 0.71 of an inch of mercury (24 millibars) within 24 hours.

With this potential track, an area of heavy snow may spread across portions of Minnesota, northern Wisconsin, northern Michigan, and central portions of Ontario and Quebec. As the storm strengthens and pushes into Canada, high winds could develop as temperatures plunge across the Midwest and then the Northeast.

Shifting bands of lake-effect snow and snow squalls are then likely to unfold and could bring locally heavy accumulations from northern Indiana and Michigan to parts of Ohio, West Virginia, Pennsylvania, Maryland, and New York state from Monday to Wednesday.

Even though the core of the storm's effects would be centered on the Midwest, its cold front will sweep in across the Southern states, Appalachians and Eastern Seaboard Monday into Tuesday, triggering a brief band of heavy rain and gusty thunderstorms. The heavy precipitation could lead to flooding and disrupt travel for motorists through the I-95 corridor.

AccuWeather forecasters will be monitoring closely for the development of a secondary storm near the Atlantic coast beginning on Monday. The speed of that coastal storm forming will dictate its strength and track, as well as influence how much rain will overspread the coastal Northeast, according to AccuWeather Chief On-Air Meteorologist Bernie Rayno. That could also set the stage for snow development and determine the intensity of wind that will blast the Northeast from Monday into Wednesday.

If the storm strengthens quickly, it will likely hug the mid-Atlantic coast and potentially hook back and move through New England. It could even intensify enough to become another bomb cyclone in that scenario. 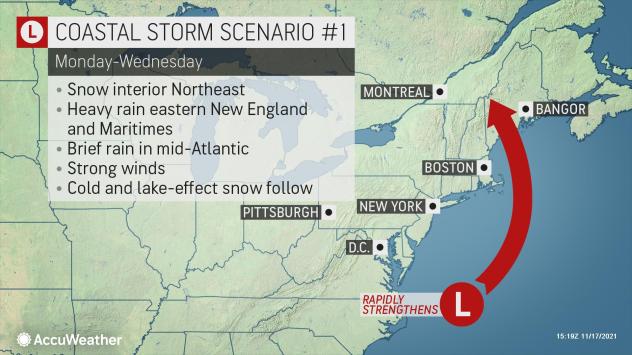 Areas from near New York City to Washington, D.C., are likely to dodge the heaviest and steadiest rain from the coastal storm in that case, but areas farther north could be soaked.

"Portions of Maine, New Brunswick and perhaps eastern Massachusetts could be slammed with heavy rain, flooding and strong winds from late Monday to Tuesday," AccuWeather Lead Long-Range Meteorologist Paul Pastelok said, adding that flooding on streets and highways could result in major travel delays for motorists.

And AccuWeather forecasters point out that rainfall wouldn’t be the only disruption-causing form of precipitation in this case.

"There is a chance that several inches to a foot or more of snow will fall on areas from northeastern New York state, near and north of Albany, New York, to Vermont and northwestern New Hampshire in this rapidly strengthening secondary storm scenario," Rayno said.

Across the central Appalachians, a change from rain to a period of accumulating snow may occur.

Another possibility is that the secondary storm will form but will be weaker and then head out to sea. In this scenario, rain could still fall across the mid-Atlantic and New England Monday into Tuesday, but dry air would begin to sweep in from Tuesday to Wednesday.

In either scenario, locally heavy lake-effect snow and slippery travel are predicted to occur across the interior Northeast Tuesday into Wednesday as colder air pours in with gusty winds. 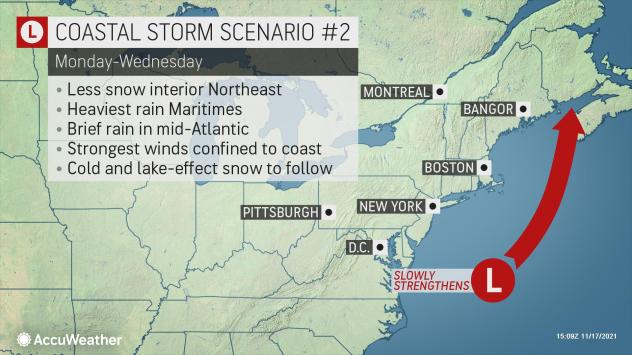 Even more disruptive than the rain and snow could be the high winds unleashed by the storm. Widespread strong winds will develop across the central and eastern United States as the storm intensifies.

"A major storm may significantly compound airport and airline operational challenges that have plagued the air travel industry of late," Porter said, adding that delays in the East would likely cause ripple-effect delays nationwide.

Gusty winds alone, with and without any thunderstorms, can cause substantial direct delays at major airport hubs in the Midwest, such as Chicago, Minneapolis and Detroit, from Monday to Tuesday as well as the major hubs in the East from Atlanta to Charlotte, North Carolina, Washington, D.C., Philadelphia, New York City and Boston from Monday to Wednesday.

The effects of the storm could even be felt across some Southern states in the days ahead of the big travel rush.

There is also the potential for severe thunderstorms to develop and sweep eastward from parts of the South Central states to the Atlantic coast, along the storm's strengthening cold front from Monday to Tuesday. As some people in the Northeast experienced this past weekend, severe weather, though rare in November, can occur. With any severe thunderstorm or high-wind event, there is the risk of power outages and property damage.

When is the best time to hit the road or take to the air ahead of Thanksgiving?

People with flexible travel plans may want to consider starting a trip Friday night, Saturday or early Sunday, AccuWeather forecasters advise, to avoid potential highway backups, hazardous weather on the roads, or trip disruptions from the major storm to impact parts of the Midwest and Northeast by early next week.