Emergency rescue efforts were required to save countless lives in Washington and British Columbia this week following the heaviest rain some areas have ever seen.

Flooding inundates Abbotsford, British Columbia, on Nov. 16, in the aftermath of an atmospheric river passing the area. This video of widespread flooding was captured by an airplane passenger.

Major flooding and mudslides prompted a state of emergency declaration to be issued for parts of Washington state Monday as heavy rain caused by an atmospheric river of moisture over the Pacific continued to torment the Northwest and parts of British Columbia, Canada.

Washington Gov. Jay Inslee issued the severe weather proclamation for 14 counties Monday thanks to the ongoing stormy pattern that has resulted in record flooding on several major rivers in the state. Some areas had received over 10 inches of rain over a 48-hour period as of Tuesday morning.

The torrential downpours and ensuing flash floods claimed the life of one woman farther north in British Columbia, Canada. According to The Associated Press, authorities in the province said the resident's body was recovered from a mudslide that devastated seven vehicles, with the conditions and the wreckage making it difficult to assess the overall scope.

“It is a significant amount of debris. It makes it very difficult for our search crews," David MacKenzie, the Pemberton District Search and Rescue manager, told the AP. "The mud is up to their waist. I can’t recall our team being involved in anything like this in the past."

According to Royal Canadian Mounted Police Staff Sgt. Janelle Shoihet, two other individuals are also considered missing from the wreckage.

Farther south, the death toll was also on the rise in Washington state.

On Wednesday afternoon, the body of 59-year-old Jose Garcia was recovered in a field near Everson, Washington. Garcia, a resident in the nearby county of Whatcom, had been missing since Monday after his truck was swept away in floodwaters. According to the Everson Police Department, Garcia was last seen on Monday clinging to a tree around 300 feet from his car.

In other areas of the region, similarly perilous situations ensued throughout Monday and Tuesday, as Coast Guard members rushed into action to rescue hundreds of residents, including some by airlift. 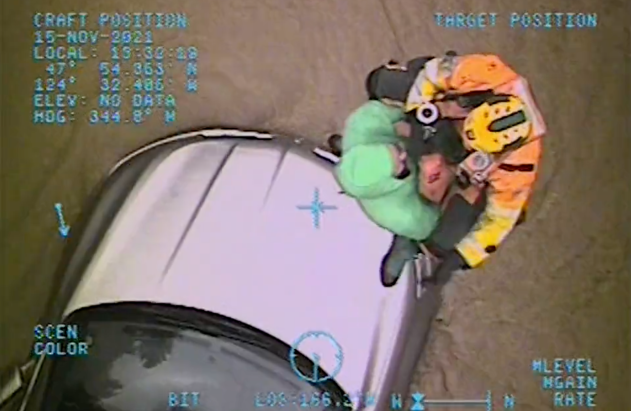 Numerous water rescues were also reported, including one that involved several people near the city of Everson, AP reported. The United States Coast Guard shared a video showing a harrowing rescue by helicopter of six adults and four children, including one baby, near the town of Forks, Washington.

Early Monday afternoon, some houses in Forks were also evacuated. Several were rescued from a bus Monday evening near Edison, Washington.

The individuals rescued from the bus were airlifted via helicopter. Video footage captured by the Coast Guard showed the six adults and four children clinging onto rescuers who carried them to safety.

One woman flashed a relieved, yet still anxious, smile as a rescuer carried her into the helicopter. The footage also showed that some individuals were rescued from the rushing floodwaters using metal baskets.

A large stretch of Interstate 5 near Bellingham, Washington, close to the Canadian border, was closed Monday due to debris floods and flooding on the highway, the Washington Department of Transportation said. The southbound stretch of I-5 in the area was reopened early Tuesday.

The flooding in Bellingham left over 500 people displaced, as water levels rose due to the incessant rain overwhelming the nearby Skagit River. Drone footage over the town captured the scope of the devastation, with dozens of streets left completely underwater.

The footage, captured by city officials, showed the floodwaters not only trapping cars in window-deep waters, but also completely blanketing the local Squalicum Creek Park. There, video on social media captured individuals attempting to ride the rushing floodwaters on makeshift rafts.

“The severe storm with floods, landslides, mudslides and the potential for straight-line winds is causing road closures, the need to establish alternate transportation routes, evacuations, impacts to local utility services, including significant power outages, localized reductions in available drinking water, and damage to homes and other public and private property and infrastructure,” Inslee’s office said in a statement.

High winds and saturated soil contributed to downed trees and power lines Monday evening, with over 140,000 customers without power in Washington state as of 6 p.m. PST, and at least 106,000 with power cuts in British Columbia. By Monday evening, power was being restored in many areas, but about 75,000 customers were still without power in Washington state, some for about 10 hours.

Forecasters referred to this specific atmospheric river as “the Pineapple Express” since moisture extends back to Hawaii in the tropical Pacific.

The storm had already been wreaking havoc in the region since the weekend, and some storms that slammed the region in late October had already saturated soils, which set the table for the worsening flooding this week, officials said.

Over the weekend, mudslides and major flooding decimated portions of southern British Columbia, pushing vehicles off highways and leaving major roadways covered in mud. Entire cities in the region enacted mandatory evacuations, while 275 people in Agassiz, British Columbia, required emergency rescuing after a pair of landslides.

Agassiz Mayor Sylvia Pranger declared a state of emergency following the mudslide, The New York Times reported, a disaster that nearly killed resident Paul Deol. Deol, who lives in the nearby town of Hope, told the Canadian Broadcast Channel that the heavy rain washed away entire sections of Highway 7, where he and hundreds of other motorists were trapped.

According to the CBC, Deol said the scene “looks like the side of the mountain has just come apart.”

Canadian Prime Minister Justin Trudeau also weighed in on the situation on Monday, sharing on Twitter that help is on the way, both during and after the flooding.“To the people of Merritt, and to all British Columbians affected by the flooding: Please stay safe,” he tweeted. “We’re ready to provide whatever assistance is needed as you deal with and recover from the flooding and this extreme weather.”

Farther south, the nearby county of Whatcom declared a state of emergency due to threats from the heavy rain, and by Monday evening about 500 people were displaced across the county while many more were encouraged to evacuate. Around 9 a.m. local time, the Sumas Police issued a shelter-in-place order as floodwaters crested over a bridge, inundating part of the town.

Rainfall amounts from the last three days stood at nearly 10 inches Monday morning, with unofficial NWS stations reporting 10.38 inches in Quinault, Washington, around 9.40 inches in Mount Baker and a BC Hydro rain gauge in Orchid Lake, British Columbia, measuring 9.21 inches. Toms Creek reported just a hundredth of an inch of rain below 10 inches. 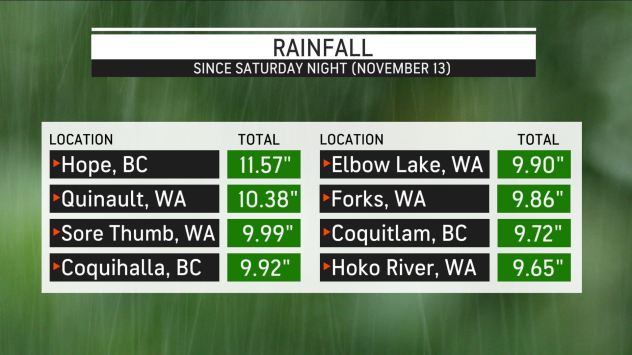 A normally small waterfall in the city of Abbotsford, British Columbia, looked like a miniature version of Niagra Falls as the raging waters cascaded over the side. On Tuesday, the British Columbia Ministry of Transportation and Infrastructure warned motorists to avoid travel to Abbotsford and the surrounding areas as emergency crews deal with "extensive flooding." Highways around the area were closed as of Tuesday, including Highway 11 in both directions south of Lonzo Road.

As the storm moved east, strong westerly winds gusted over 100 mph in the Northern Rockies.

On the Deception Pass bridge, located in Island County, Washington, fierce winds sent a semi-truck toppling onto the guardrail on Monday afternoon. Video captured by a fellow driver shows the massive vehicle completely blocking the opposite lane of the two-lane overpass.

Elsewhere in the area, the goalposts at a local football field also felt the wrath of the storm’s winds. The damaged posts were left harshly bent to the right, unusable for any game. 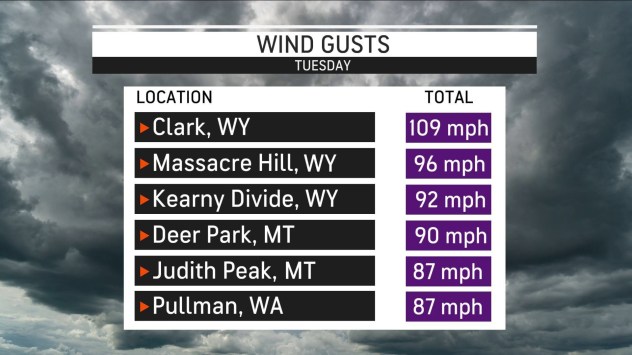 At least 12 rivers were under flood warnings issued by the National Weather Service. An NWS river gauge showed that the Bogachiel River near La Push, Washington, had broken its all-time record high level Monday at 44.93 feet. The previous record for the station was 42.64 feet, set on Nov. 6, 2006. The Nooksack River at North Cedarville, Washington, also broke its record Monday at 150.35 feet, versus the record of 149.61 feet on Nov. 6, 2006. The river was seen still raging Monday evening. The Skagit River near Mount Vernon was forecast to break its record Tuesday and was already at 35 feet Monday evening, forcing officials to close bridges.

Although the river flooding risk continued Tuesday in some areas, precipitation rapidly tapered off in the area, except for some snow that lingered in the Washington Cascades.

Tower that survived infamous tornado to be transformed into apartments