The first official day of winter might be a couple weeks away, but it might be feeling and looking wintry by the end of this week. AccuWeather meteorologists say that cold and stormy weather conditions could continue to disrupt holiday shoppers and outdoor celebrations in the coming days.

Near-seasonable conditions started out the week, with afternoon high temperatures in cities from Buffalo, New York, to Philadelphia holding within a few degrees of normal on Monday. Gradually warmer conditions are expected into the middle of the week before the chillier air follows in behind the front. 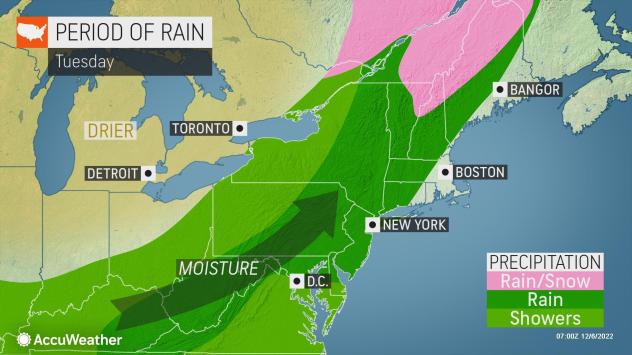 A storm, and its associated cold front, moved into the Ohio Valley and Northeast on Monday night and rain began to overspread the region. On-and-off rain is expected on Tuesday and Tuesday night along the Interstate 95 corridor from Boston to Washington, D.C. Showers are expected to linger in the region on Wednesday as well.

During this time, cooler air will move in, holding across the northern Plains and parts of the Great Lakes. High temperatures in Minneapolis will be in the 20s for the first half of the week, while Madison, Wisconsin, has temperatures in the 30s through Wednesday.

As the second half of the week approaches, another storm is set to shift from the central Plains into the Ohio Valley and Northeast, but the exact track of the storm will determine the exact impacts for the northern tier of the country. 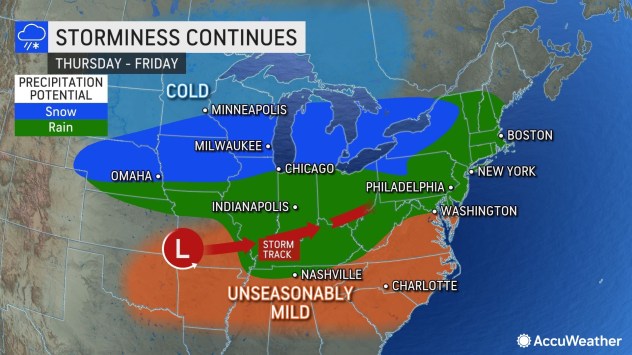 This storm is forecast to gain strength on Thursday as it emerges in the Plains. Widespread rain is forecast in parts of Missouri, Illinois, Indiana, Kentucky and Tennessee during the day. For more southerly locations, like the Tennessee River Valley, this will bring yet another round of rain that could enhance the risk of flooding.

Along the northern edge of the moisture, in a zone from Nebraska to western New York and northern and western Pennsylvania, is where precipitation could fall as snow or a wintry mix.

How much snow could accumulate will depend on a number of factors, including how cold it stays in the upper Midwest this week and the exact track of the storm. It's not out of the question that somewhere between Lincoln, Nebraska, and Milwaukee, could get a few inches of snow out of the storm.

"People living in or traveling along the Interstate 80 and 90 corridors of the Midwest and interior Northeast should monitor the progress of this stripe of snow as there is more risk of the slippery travel zone shifting southward, rather than northward at this stage," AccuWeather Senior Meteorologist Alex Sosnowski said. "The chance of snow or a wintry mix includes the cities of Chicago and Detroit." 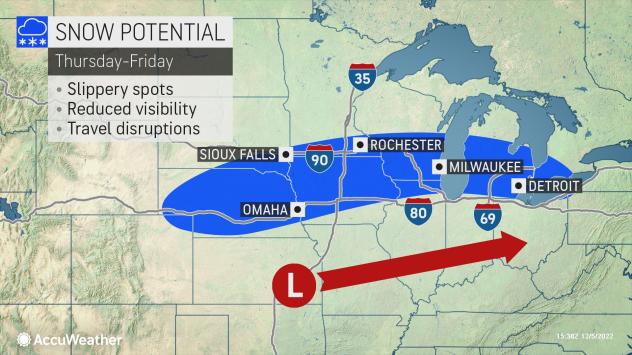 The extent of snow becomes more uncertain as the storm shifts east Thursday night and Friday.

"Depending on the track of the storm, and how far south the cold air reaches, temperatures in the (coastal) Northeast could be too warm for much in the way of snow," said AccuWeather Senior Meteorologist Dan Pydynowski.

The most likely locations for snow in the northeastern U.S. are farther north, near the Canada border, where the air is likely to be the coldest. However, it is possible that the storm tracks into the mid-Atlantic. In this scenario, the moisture will be well to the south of the subfreezing temperatures, keeping it cold, but dry, in northern New York and northern New England. Rain would then fall in cities like Pittsburgh, Washington, D.C. and Hartford, Connecticut. 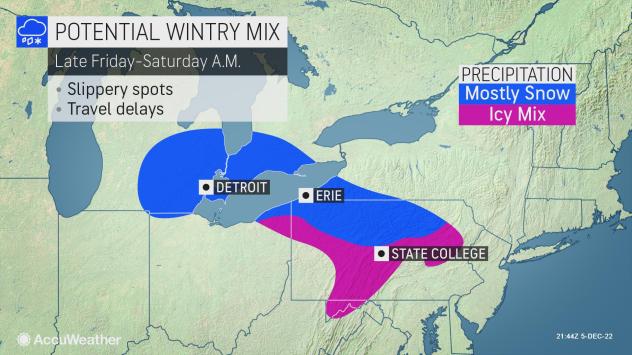 Should the more potent, cold air sink into the Northeast, and the storm track into the mid-Atlantic, it could be just the right conditions for snowflakes to fall in parts of Maryland, New Jersey, southern New York and southern New England.

Even if snow doesn't reach these locations, snow lovers should not fear. More wet weather, and more opportunities for snow, could come in the middle of the month.