Winds gusted over 100 mph and over 24 inches of snow piled up in the mountains as a storm swept across California on Thursday, and another high-impact storm is on the way.

It was a snowy start to meteorological winter across the mountains of California Thursday as a winter storm tracked across the state, and AccuWeather forecasters say that more snow is on the way.

The storm arrived in Northern California late Wednesday and continued throughout Thursday, delivering much-needed rain to the lower elevations. San Francisco International Airport measured 0.71 of an inch of rain on Thursday, nearly half of the 1.58 inches of rain that fell in all of November.

A yardstick was needed to measure the snow in the higher elevations with snow causing travel-related headaches for drivers across the region.

Interstate 80 at Donner Pass and Highway 50 at Echo Summit were closed periodically throughout the storm due to vehicles stuck on the snowpacked roads, but the roads have since been reopened to traffic. 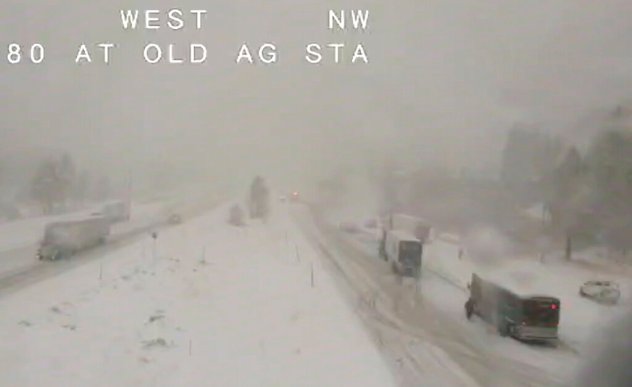 In this image taken from video from a Caltrans remote video traffic camera, traffic moves slowly through the snowy conditions along Interstate 80 near Truckee, California, Thursday, Dec. 1, 2022. (Caltrans via AP)

The early-season snowfall was a boon for ski resorts across the region, including Mammoth Mountain, located 100 miles southeast of Lake Tahoe. 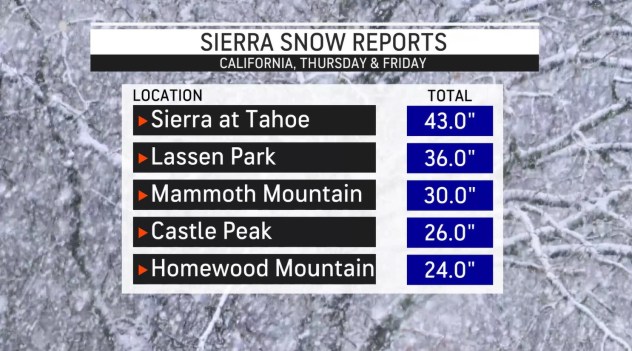 More than 2 feet of snow fell over the resort in just 24 hours, leading to excellent conditions on the mountain. "We have a beautiful powder day upon us with a storm total of 23-30 [inches], conditions are going to be incredibly fun," Mammoth Mountain said on its website Friday.

The highest snow report came from Sierra at Tahoe where 43 inches accumulated.

The snow was accompanied by strong winds, including a 123-mph gust at Washeshu Peak, California. The hurricane-force wind gusts were not limited to California, as gusts over 80 mph were clocked in Utah and Colorado. 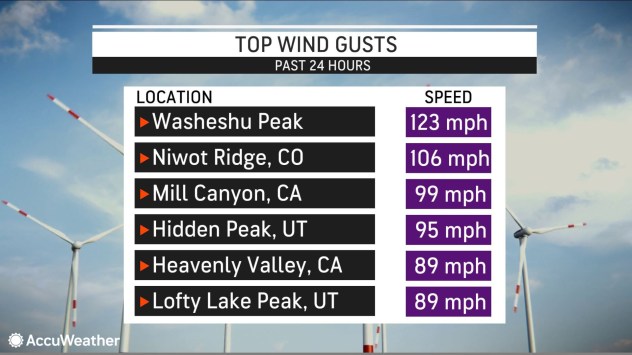 “Feet of new snow and strong winds will overload an already weak snowpack and result in very dangerous avalanche conditions in the mountains,” the Sierra Avalanche Center warned, according to a report from The Associated Press.

Skiers and snowboarders heading to the slopes may encounter disruptions due to avalanche mitigation efforts.

Another dose of rain and mountain snow is headed toward California this weekend, with snowfall accumulations of a foot or more once again expected in the higher elevations.

The new storm will also bring more meaningful rain to the lower elevations, including portions of Southern California.