The startling revelations could change scientists' understanding of wolf-pack dynamics and improve conservation efforts for an apex predator that plays a major role in the health of its mountain ecosystem. 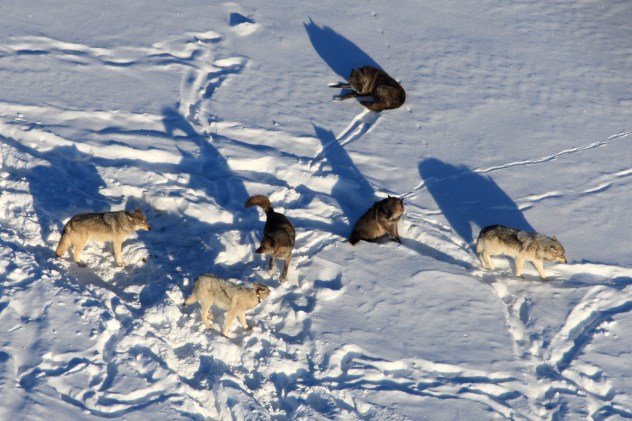 Toxoplasmosis, caused by the T. gondii parasite, is best known as an infection in cats, but it also affects wolves and might be changing their behavior. A wolf pack is seen in Yellowstone National Park. (Kira Cassidy/NPS)

(CNN) -- Wolves are pack animals, living in family groups led by a matriarch and her mate. Some wolves stay with their pack their whole lives, helping hunt and raise pups like aunts and uncles as they mature, but others split off to find a mate of their own and start their own packs.

There are lots of factors that go into these types of behavior, such as quirks of personality and family relationships established as pups, but new scientific findings revealed a surprising influence on wolf-pack dynamics: a mind-controlling parasite that makes a gray wolf engage in riskier behavior.

Researchers found that gray wolves in Yellowstone National Park infected with a parasite known as Toxoplasma gondii were more likely to leave the group of wolves they were born into or become a pack leader.

The startling revelations could change scientists' understanding of wolf-pack dynamics and improve conservation efforts for an apex predator that plays a major role in the health of its mountain ecosystem.

If you've ever owned a cat, chances are you've heard of toxoplasmosis, an infection caused by T. gondii, a single-celled parasite. Its life cycle is closely entwined with cats — due to unique enzyme activity, cat guts contain an excess of an acid that T. gondii needs in order to reproduce. The parasites reproduce in a cat's intestines, and then the cat sheds the parasite's oocysts (single cells that are sort of like eggs) in its feces.

When other mammals or birds eat or drink something contaminated by those hardy oocysts, they become infected as well. But other animals' guts don't have the linoleic acid content that T. gondii needs to reproduce, so the parasite has to find its way back to a member of the cat family.

The parasites enter the intermediate host's brain and muscle tissue and change its behavior in a way that boosts its chances of getting eaten by a cat. The mechanism isn't yet clear to researchers, but the phenomenon is most well known in rodents: Mice infected with T. gondii seem to lose their inherent fear of cats and no longer avoid the scent of cat urine, studies have shown. These daredevil mice make an easy meal for a cat, and in eating them, the newly infected feline unwittingly sets the process in motion once again.

When it comes to evolutionary survival, T. gondii is optimized for cats and their prey, but other animals can get caught in the biochemical crossfire, with similar behavior-altering results. Even humans can be affected. Some behavioral changes — including taking risks in business, road rage and even schizophrenia — may be associated with T. gondii infection. And now, a recent study in the journal Communications Biology has shown the first evidence of T. gondii's effect on gray wolves.

Scientists have been monitoring wolves in Yellowstone National Park since the species was reintroduced there in 1995. Pack behavior is observed via trail cameras and plane flyovers, and about a quarter of the wolves wear radio tracking collars and undergo blood tests. These tests revealed that some of the wolves are infected with T. gondii, likely the result of sharing habitat space with cougars.

The presence of T. gondii caught the eye of researchers, including the study's co-lead author Connor Meyer, a doctoral student at the University of Montana's Ungulate Ecology Lab. Since T. gondii tends to influence an animal's tendency to take risks, Meyer said he and his colleagues decided to zero in on wolves behaving boldly, asking themselves, "What behaviors can we measure and have we measured for 25 years? And then, what of those behaviors do we think can be considered risky?" 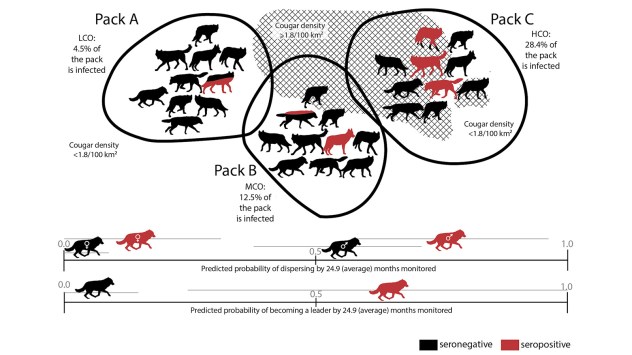 A graphic depicts the probability of dispersal and becoming a pack leader in healthy wolves compared with wolves infected by the T. gondii parasite over the course of two years. (Kira Cassidy/NPS)

A wolf puts itself in danger when it leaves its family and goes off to join or form a new pack, so the researchers looked back on a quarter century's worth of records of wolf dispersal and pack leadership, linked with blood test results from all the wolves in the study.

The study team found something startling: "A wolf that is positive for toxo is 11 times more likely to disperse than a wolf that's negative," said wildlife biologist Kira Cassidy, a research associate at the Yellowstone Wolf Project and co-lead author of the study. "And then becoming a pack leader was even more of an impact: A wolf that was positive was 46 times more likely to become a pack leader than a wolf that was negative."

Given the behavioral patterns associated with T. gondii in other animals, the researchers suspect that toxo is responsible for these trends. "We assume that there might be some sort of link between boldness caused from toxo and being more willing to leave your home range and go to another wolf's territory and possibly be killed," Meyer said. 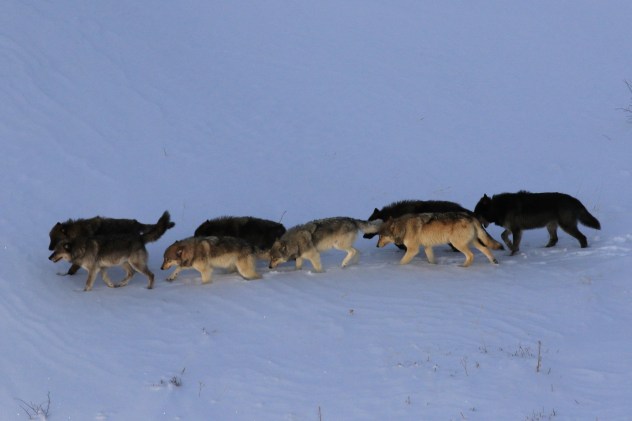 A mind-controlling parasite might be affecting the behavior of gray wolves in Yellowstone National Park. (Kira Cassidy/NPS)

"One thing I would be really interested to ask would be, how does this parasite affect other behaviors?" said Hansen Wheat, who was not involved with the study. She noted that boldness might account for a wolf leaving its pack, but wondered if other behaviors, including aggression, might be present in its dealings with its packmates, maybe leading them to being "actively expelled."

Ultimately, wolves infected with toxoplasmosis may not lead T. gondii back to its preferred feline host, but the parasite could be playing an unexpectedly large role in the lives of wolf populations. Hansen Wheat said that understanding how wolves disperse and interact with each other, both on their own and under the influence of mind-controlling parasites, can help us better meet their needs.

"The more we learn about wolf behavior, the better we can understand how to conserve the species," she said.