Rapid freeze-up to follow enormous storm in central, northeastern US

From Colorado to Texas and up in to Missouri, a storm caused widespread impacts in the Plains and Midwest on Feb. 16.

The weather will change in dramatic fashion with a rapid freeze-up anticipated across portions of Midwest and interior Northeast due to a multifaceted storm that will continue to push across the country from Thursday night into Friday, AccuWeather meteorologists warn.

Temperatures have already plummeted from springlike levels on Wednesday into the 20s across parts of the central United States as a snowstorm created slippery travel conditions.

"We are turning the clock back to January in the central United States on Thursday and Thursday night and will do the same in the Northeast on Friday," AccuWeather Chief On-Air Meteorologist Bernie Rayno said. 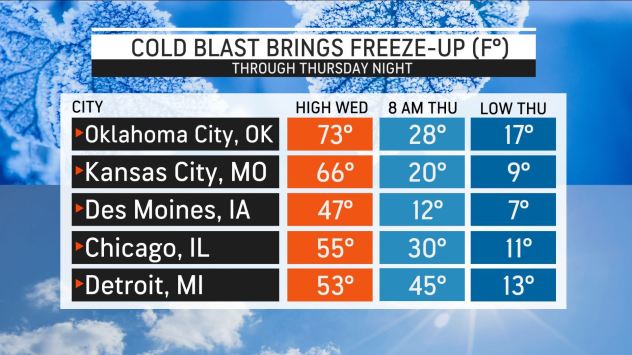 After surging to levels more typical of April in many areas, temperatures are forecast to plummet to 10-20 degrees or more below average for mid-February from west to east across the Plains, Midwest and Northeast into Friday.

As temperatures plunge from west to east, areas of standing water, slush and moisture will freeze unless treated with significant ice-melting compounds. On top of that, many crews may not be able to successfully pre-treat roads as rain will quickly wash away chemicals used to melt snow and ice.

Heavy snow rates could make it difficult for plowing crews to keep up in some areas, such as from eastern Kansas to Illinois, southeastern Michigan, northern Indiana and northwestern Ohio. 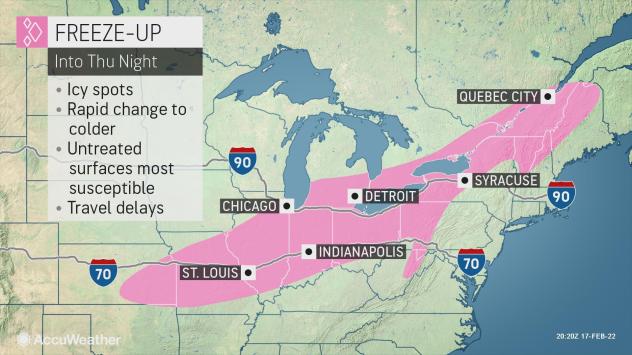 As snow spreads eastward and as temperatures plunge and cause a freeze-up from the central Plains to part of the Ohio Valley and lower Great Lakes region into Thursday night, travel may grind to a standstill on portions of major highways such as interstates 40, 49, 55, 65, 69, 70, 75, 80 and 90.

Wintry weather has already forced the cancellation of flights on Thursday, and additional cancellations are likely. Even where flights are not canceled at the major hubs of Chicago, Detroit and St. Louis and the smaller regional airports, substantial delays due to deicing operations and runway maintenance are likely.

Temperatures hovered in the mid-60s F through the late afternoon hours in Kansas City, Missouri, on Thursday. However, during the night, temperatures plunged 40 degrees. Before daybreak Thursday, heavy snow moved in with whiteout conditions, thunder and lightning, and temperatures dipped into the low 20s. Roads rapidly became snow-covered, and travel will remain hazardous into early Friday as temperatures dip into the single digits following a snowfall in the neighborhood of 8-12 inches, forecasters say. 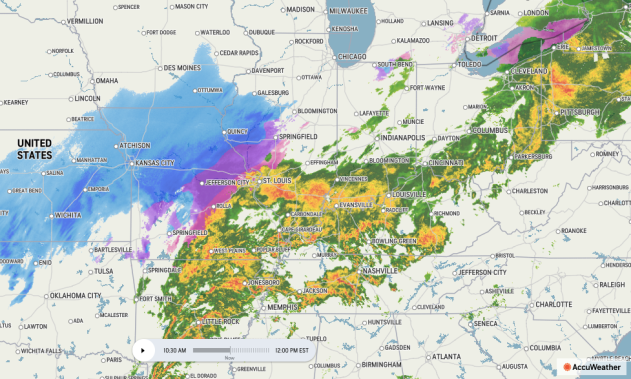 This radar snapshot from Thursday midday shows snow in blue, ice in purple and rain in green, yellow and red. (AccuWeather)

In Chicago, temperatures had dipped to near 30 F at daybreak just ahead of a snowstorm that turned roads into a wintry mess as temperatures plunge and end up in the teens Thursday evening and a low near 10 F on Friday morning. Temperatures will even be below typical dead-of-winter levels. On Jan. 15, the average high and low for Chicago are 31 and 19 respectively.

Detroit's temperature peaked in the 50s on Wednesday and, as rain poured down at the start of Thursday, had slipped into the 30s. A wintry mix will transition to heavy snow by evening rush hour and rapidly pile up to 6-10 inches in the Motor City by the end of the evening. Temperatures will plunge into the lower teens by Friday morning and will rise to only the mid-20s on Friday afternoon. 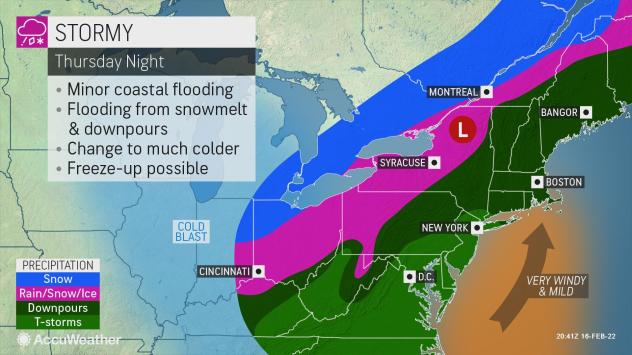 Even though only a small amount of snow is expected to fall around St. Louis, areas of slush and water will freeze up Thursday night with a low in the single digits expected on Friday morning. This follows a high in the mid-60s on Wednesday and Thursday. Cincinnati may avoid most or all of the snow from the storm, but the same freeze-up awaits the city as well Thursday night as temperatures will plummet into the mid-20s after a high near 60 on Thursday.

Much less snow is forecast to fall farther to the east from eastern Ohio to northwestern Pennsylvania and upstate New York and northern New England from the storm. However, excessive rain and rapid melting of the existing snow cover will lead to significant flooding in some areas, which will be subject to a freeze-up Friday and Friday night. 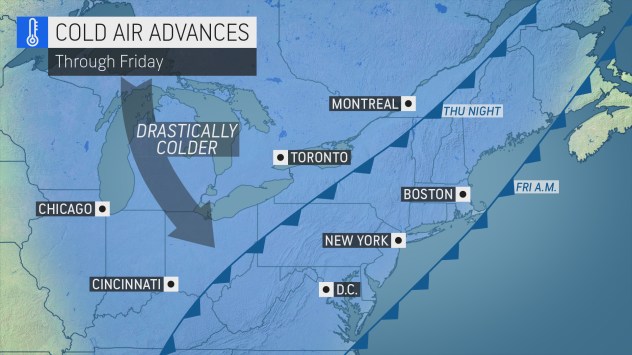 Not only will icy areas develop on untreated roads and sidewalks, but areas of water can freeze solid following flooding or high water.

In areas east of the Appalachians in the mid-Atlantic and southeastern New England, most roads will tend to dry off in the wake of a period of drenching showers and gusty thunderstorms from late Thursday night to early Friday. This includes the major cities of Washington, D.C., Philadelphia, New York City and Boston. However, the temperature change will still be dramatic and a reminder that it is the third week of February and not mid- to late April.

In New York City, after a high close to the record of 67 from 1976 on Thursday, temperatures are projected to fall into the 30s during the daytime on Friday and to a low in the mid-20s Friday night. 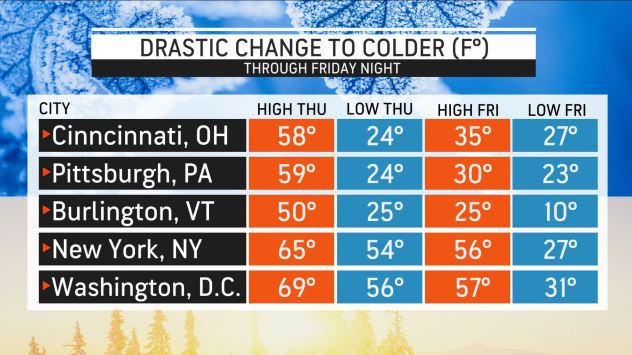 Many locations from the Appalachians to the Atlantic coast in the Northeast may get little temperature rise on Friday whatsoever. The end of Friday will be substantially colder than the start of the day in most cases.

Not too long after the return to winter, an Alberta clipper storm may cause trouble by Friday night around the Great Lakes and parts of the Northeast on Saturday in the form of snow showers and locally heavy snow squalls that can create sudden slippery travel. Gusty winds will precede and accompany that fast-moving storm.

Another cross-country storm with impacts ranging from snow, ice, heavy rain and severe thunderstorms is likely to affect the Central and Eastern states from Tuesday to Wednesday of next week.

"Since many people are off on Monday, due to the President's Day holiday, they may want to make sure they take their laptop home with them late this week as they may have a work-from-home day on Tuesday," AccuWeather Senior Meteorologist Courtney Travis said.