The first of this week’s clipper storms will bring light snow showers to some parts of the region, potentially causing problems in areas where the snow falls early in the morning.

AccuWeather meteorologists say that while some parts of the Northeast will not be able to escape from winter weather amid an active weather pattern, other areas will continue to be bypassed by snowfall.

"We continue to lay down the foundation for cold air across the northern tier of the Midwest and Northeast," AccuWeather Senior On-Air Meteorologist Justin Povick said, referring to a parade of Alberta clipper storms that have been dropping snow near the border of Canada and the United States and ushering in colder air in their wake. 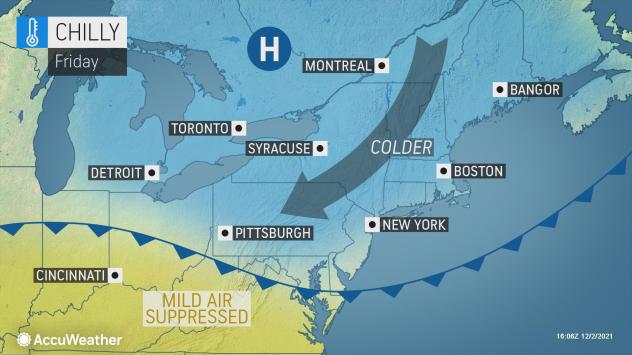 Even across the northern tier, snowfall through the end of the week is likely to be generally light and on the order of a few inches or less. Only in a few pockets where there is brief lake-effect snow in northern Michigan and parts of western and northern New York state might pick up snowfall amounts of 3 or 4 inches through Friday.

The stormy pattern will continue through the weekend, but a northward shift in the fast-moving systems over time will limit opportunities for snow over the central Appalachians and may prevent additional snow showers along the Atlantic coast, Povick explained.

The northward storm track will also allow slightly milder air to arrive over the Ohio Valley, central Appalachians, mid-Atlantic and southern New England this weekend to the start of next week. 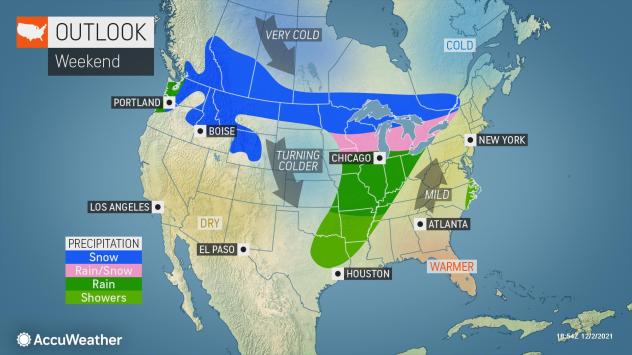 For example, New York City has had a few rounds of snow showers over the past several days that have brought a light coating to some of the western and northern suburbs. Highs this past weekend to the first half of this week have generally ranged from the upper 30s to the lower 40s F. With the northward shift in the storm track, it is possible that snow is a no-show through the weekend, other than a passing flurry. Highs in the 40s will be more common in the New York metro area late this week and this weekend. A high in the mid-60s is in the offing for Monday.

New York City's Central Park, as well as Philadelphia's Independence Mall, Washington, D.C., Baltimore's Inner Harbor and even Boston Common, will all be likely to remain void of measurable snow (0.1 of an inch or greater) into Monday. Temperatures are forecast to reach the lower 60s as far north as Boston on Monday.

Meanwhile, a somewhat more robust storm is forecast to trek eastward this weekend near the northern tier of the U.S. 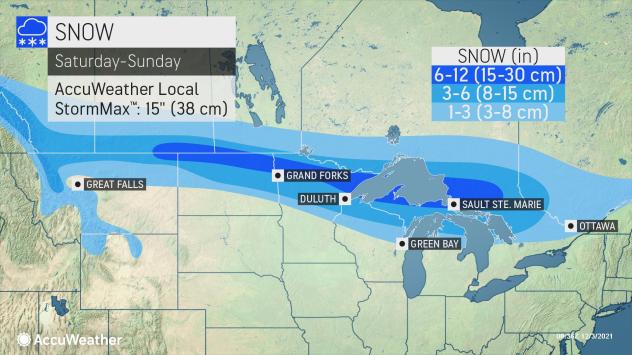 Moderate to heavy snow will fall from northern North Dakota and Minnesota to northern Michigan Saturday into Saturday night and across the central portions of Ontario and Quebec Sunday into Sunday night.

The storm, which AccuWeather meteorologists have been monitoring for a week, is most likely to track too far to the north to trigger snow along the I-95 corridor, according to Povick. One of the factors behind that is the likelihood that the storm will not make a connection with the southern branch of the jet stream.

Some rain may still sweep across the I-95, however, as the storm's cold front moves eastward across the region from late Sunday to Monday. 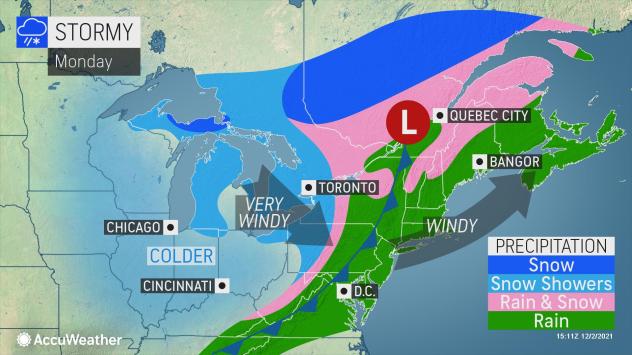 "The cold front may pack a punch," AccuWeather Senior Meteorologist Dave Dombek said, adding that damaging winds, torrential downpours and thunder and lightning may accompany the front as it moves from the Appalachians to the Atlantic coast on Monday.

Farther inland, there is the possibility that cold air will come in fast enough to cause precipitation to change over to snow or snow showers at the tail end over the mountains in West Virginia, western Maryland, western and central Pennsylvania and western and central New York state on Monday. Even in this case, only a light amount of accumulation would occur. But, with falling temperatures over the higher elevations, it is possible that roads will turn slippery.

Another system that could eventually cause travel trouble toward the middle of next week is on the radar of AccuWeather forecasters, even though the energy of this storm was still way out over the Pacific Ocean as of the middle of this week. 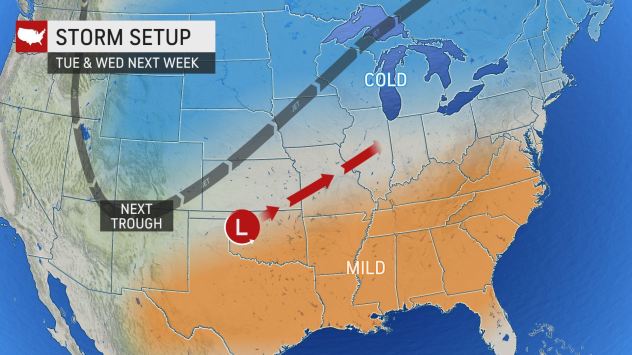 AccuWeather meteorologists are still analyzing several scenarios with that next storm, which could shift eastward on Monday from the Rockies and the Plains toward the Midwest. Eventually, it could make its way into part of the Northeast on Tuesday and Wednesday.

Ultimately, the track of the storm will hold the key as to which areas will be most likely to receive snow versus rain versus a wintry mix. Another factor will be how cold it turns behind the first storm in the Midwest and Northeast.

As is often the case this time of year, warm waters of the Atlantic Ocean may prevent snow or limit the amount of snow along the coast and I-95 corridor during the middle of next week. Water temperatures offshore ranged from the upper 40s east of Massachusetts to lower 50s east of Delaware -- or a few notches above normal -- at midweek. AccuWeather forecasters say, with all factors considered, a wintry mix is not out of the question in the upper mid-Atlantic and coastal New England areas. 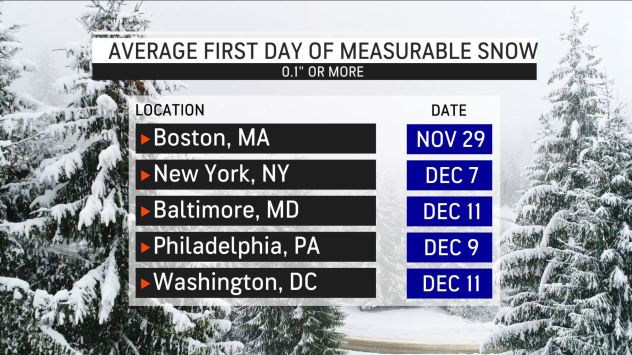 There is a somewhat greater chance of snow or a wintry mix over the central Appalachians from Tuesday night to Wednesday. Once again, though, the northern tier is the most likely zone to be in the running for another dose of accumulating snow if the storm takes a path to the north.

All this talk of snow may lead many to wonder what the odds of snowfall are later in December and around Christmastime. AccuWeather forecasters weigh in on the possibilities in their annual white Christmas forecast.

Correction: A previous version of this story contained a graphic that misstated the dates for the average first measurable snowfall for New York City, Baltimore, Philadelphia, and Washington D.C.