Intense video posted on social media shows powerful winds ripping off roofs and signs as well as the moment a man barely misses death when an airport ceiling collapses.

Across Turkey, fierce winds caused significant damage to many regions of the nation on Nov. 30. Among the wreckage includes a man dodging a building collapse and roofs sent flying.

A powerful storm blasted dozens of provinces in Turkey Monday, killing at least six people, according to CNN, injuring dozens and severely damaging several buildings. Istanbul, home to more than 15 million people, faced powerful winds which ripped off roofs and uprooted trees. According to the Disaster and Emergency Management, four people were killed in Istanbul, another person in Zonguldak province and one person in Kocaeli province when strong gusts collapsed walls, roofs and blew building debris onto passersby.

AccuWeather Meteorologist Mary Gilbert said that Storm Arwen, after moving into central Europe and losing some potency over the weekend, redeveloped farther to the south and east on Sunday.

"While Storm Arwen passed north of the Black Sea region, a cold front associated with the storm dug across Eastern Europe early this week and brought violent winds to portions of Turkey," she said.

In Zonguldak Caycauma Airport, about 240 miles (391 kilometers) to the east of Istanbul, security cameras captured the moment gale-force winds in Turkey's Black Sea province caused a ceiling to collapse. A man can be seen barely escaping the debris by exiting the doors seconds before the ceiling slams onto the floor.

Similar chaotic scenes were caught on security cameras all around Instanbul, the country's most populous city. In one video clip, a massive piece of debris is seen falling to the ground amid the high winds. A pedestrian could be seen narrowly escaping the falling debris, but a woman and child were hit. According to Reuters, citing local reports, the woman suffered leg injuries and the boy sustained an injury to his arm. Both injuries were serious enough to require hospitalization.

Elsewhere in Istanbul, several men barely escaped bricks that came crashing to the ground after being dislodged by wind gusts. Meanwhile, another man was seen narrowly escaping a large metal panel that had been sent flying by the gusts. On highways, the strong winds toppled tractor-trailers. In a suburb just north of Istanbul, bystander cellphone footage showed the high winds taking down a giant clocktower, which nearly crushed a vehicle speeding by as the tower crash to the street. 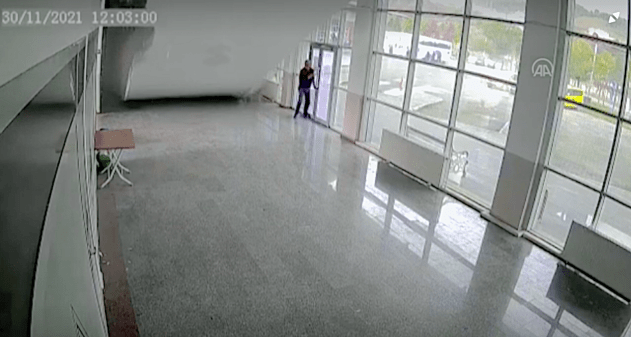 This image from security cameras at Turkey's Zonguldak Caycuma Airport captures the moment the ceiling collapsed due to fierce winds. (Reuters)

And in the Turkish city of Duzcem, about two hours east of Istanbul, a surveillance camera caught footage of a washing machine sliding down the sidewalk because of the powerful winds.

According to the Daily Sabah, a Turkey-based media outlet, a mother was among those killed when she jumped on her baby carriage, shielding her daughter from falling debris. Ümitcan Ünlü told the Demirören News Agency (DHA) he was lucky to get away with minor injuries when a roof torn away by the storm hit his ninth-floor apartment in Beylikdüzü, the Daily Sabah reported. “I heard a noise and turned my head. Just then, bricks and wood hit me, shards of glass fell on me. I jumped and ran to the other room but windows there crashed too because of debris. I was shocked.”

State weather officials said the wind blew as fast as 80 mph (129 km/h) in the district of Beylikduzu, which also was among the most affected places. AccuWeather's Mary Gilbert said west of Istanbul a wind gust of 75 mph (120 km/h) was recorded with the storm. "These wind gusts are equivalent to the strength of a Category 1 hurricane on the Saffir-Simpson Hurricane Wind Scale," she explained. "While this storm was not actually a hurricane, many along the northern tier of Turkey may have felt like they were struck by one."

Many boats docked in Maltepe and Pendik were damaged, and the wind also caused a cargo ship to collide with a pier at the Port of Ambarli. Authorities canceled sea transport and closed the Bosphorus Strait which connects the Marmara and Black seas. The Istanbul government announced that all schools would be closed on Tuesday due to bad weather, and the governor's office also said motorcycles and electric scooters weren't allowed on the road from 11 p.m. Monday through 6 p.m. Tuesday because of the powerful storm.