As dawn broke Saturday morning, a nor'easter underwent rapid intensification into a bomb cyclone as it moved northeastward along the Eastern Seaboard. Snow had already piled up to more than a foot along the New Jersey coastline, and AccuWeather forecasters say that by the time the last flake falls, the storm could unload over 3 feet of snow with winds up to 100 mph creating an all-out blizzard — one that not only has the potential to be a top-five winter storm for cities like Boston, but could leave a lasting impression on the region for this decade and perhaps many more to come.

“This is going to be a dangerous, life-threatening storm, especially in southern New England,” AccuWeather Chief Meteorologist Jon Porter said.

The barometric pressure inside of the storm dropped 26 millibars in 12 hours from Friday night to Saturday morning, far beating the definition for a bomb cyclone of a pressure drop of at least 24 millibars in 24 hours.

The rapidly strengthening nor’easter is likely to be the strongest and most disruptive snowstorm and blizzard in several years for portions of New England and the immediate mid-Atlantic coast due to ferocious winds and snowfall rates that will have the ability to strand motorists, shut down major highways and airports and leave some communities isolated and in the dark. 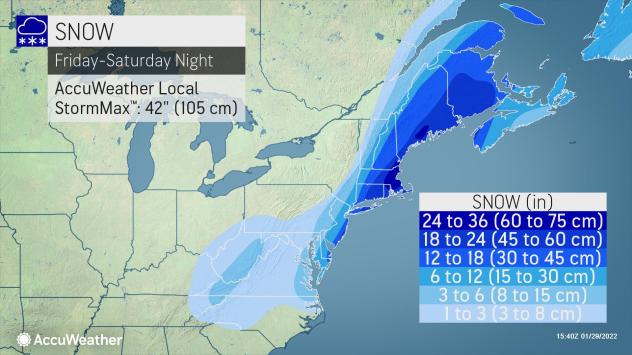 “Bands of heavy snow will develop in eastern New England during the heart of the storm that can produce 2-4 inches of snow per hour - extremely intense snowfall rates,” Porter said. “There will also be the potential for thunder and lightning associated with these intense bands. Travel is likely to be nearly impossible in parts of southeastern New England into Saturday night.”

Similar conditions have already been felt along the New Jersey, Delaware and Maryland coasts, where 6-12 inches of snow had fallen as of Saturday morning.

When such intense snowfall combines with the high winds anticipated, snowdrifts as high as several feet or even as tall as a two-story building will be possible.

Boston will be close to the heart of the storm, which is expected to unload 18-24 inches in the city. It is not out of the question for the blizzard to rank high in the top-five biggest snowstorms to impact the city, and it could not only be the biggest to hit Beantown in January, but rival the Blizzard of ’78 or the biggest snowstorm on record from Feb. 17-18, 2003, if amounts surpass 27 inches. Other locations that will have a similar dumping of snow, with the potential for an AccuWeather Local StormMax™ of 42 inches, are Providence, Rhode Island, to Portsmouth, New Hampshire and Portland, Maine. 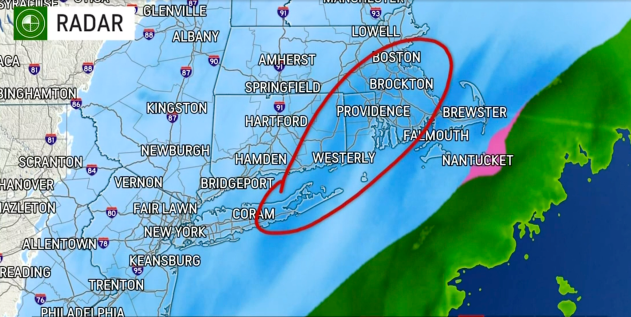 This radar image from Saturday morning, Jan. 29, 2022, shows a band of heavy snow setting up from Boston to eastern Long Island. (AccuWeather)

Measuring the snow in Boston and many other areas in eastern New England, however, may be an exercise in futility for some. Due to the extensive amount of blowing and drifting of snow expected from the blizzard, taking an accurate reading could be extremely difficult. Moreover, travel could become impossible due to the significant drifting of snow.

Just south and west of this zone from Islip, New York, to Hartford, Connecticut, Springfield, Massachusetts, Concord, New Hampshire, and Bangor, Maine, 12-24 inches are in store, forecasters say, which is still a tremendous accumulation considering the major blowing and drifting snow that is anticipated during and after the storm. By early Saturday morning, snowfall amounts of 6 inches were already being reported at Islip, New York.

Blizzard warnings remain in effect from the Delmarva Peninsula to Maine and include the cities of Atlantic City, New Jersey; Providence, Rhode Island; Boston; Portsmouth, New Hampshire; and Portland and Bangor, Maine.

New York City has been forecast by AccuWeather to be buried by a heavy snowfall of 6 to 12 inches. Farther south, snow was beginning to wind down around Philadelphia Saturday morning as 6-8 inches was reported around the city. The nation’s capital and Baltimore’s Inner Harbor wound up with anywhere from a coating to a couple inches of snow. 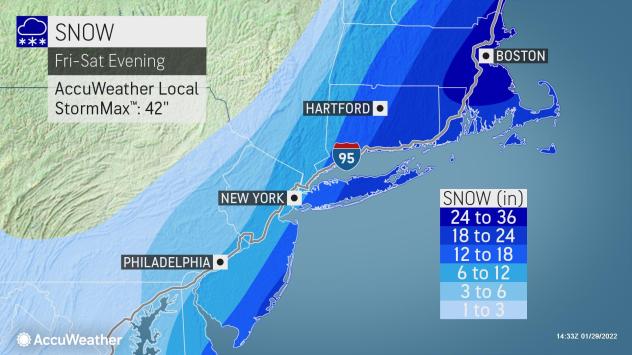 To prepare, the New York City Sanitation Department has 700 salt spreaders in the city loaded up and ready to respond to the storm.

"We’re telling people to stay off the roads, only do essential travel, be very careful, this is another snow where coupled with the snow coming in, we’re talking about really high winds," New York City Sanitation Department Commissioner Edward Grayson told AccuWeather National Reporter Emmy Victor.

Coastal areas of the mid-Atlantic and New England will face the most significant impacts of the region. Atlantic City, New Jersey, a city that is already far-outpacing seasonal snowfall in Philadelphia — 4.6 inches — with a total of 17.2 inches as of Friday, had already tacked on 10-12 inches of fresh snow from this latest storm as of Saturday morning, with snow continuing to fall. Farther south, places like Ocean City, Maryland, received 8-10 inches.

Winds gusting to strong tropical storm force, 50-70 mph, will blast the mid-Atlantic coast as hurricane-force gusts, some reaching as high as 100 mph, are expected to howl in southeastern New England. In both regions, the fierce winds will accompany heavy snowfall with the visibility being reduced to near zero at times, AccuWeather forecasters say. 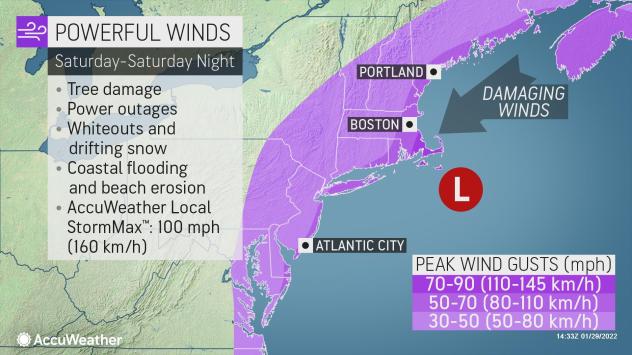 Power outages were beginning to skyrocket in Massachusetts Saturday morning, surpassing 110,000 customers. These numbers are only expected to grow and expand to other states into Saturday night.

Even though the dry, powdery snow will not cling to trees and power lines, the high-velocity winds alone can break large tree limbs and knock over poorly rooted trees. As trees and limbs come down, power outages at the local and regional levels are likely in southern and eastern New England, as well as along the immediate mid-Atlantic coast. Forecasters and officials are advising people to be prepared for lengthy power outages and have flashlights and blankets on hand.

Utility companies in New England are bracing for the storm. Maine Power is preparing by staging crew around the area.

"We’ve brought in 300 additional lineworkers. This compliments our 200 internal lineworkers. And we’re also going to be bringing in some additional tree crews. So, we’ll be mobilizing all of those resources over the next couple of days," said Central Maine Power VP of Electric Operations, Adam Desrosiers. 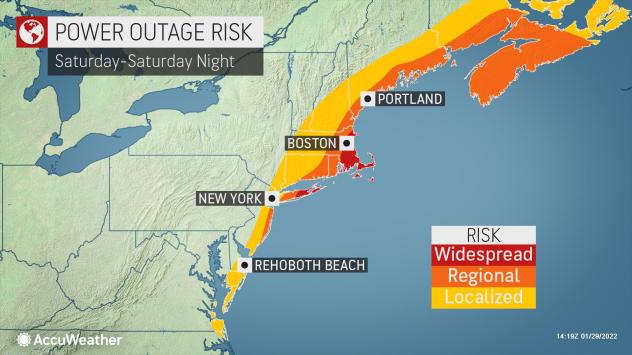 The strong circulation of the storm will push water toward the mid-Atlantic and New England coasts. The combination of winds, waves and high astronomical tides associated with the new moon will lead to moderate coastal flooding with a storm surge averaging 2-4 feet. This means that roads and neighborhoods subject to flooding during powerful winter storms and hurricanes will take on water due to significant overwash. 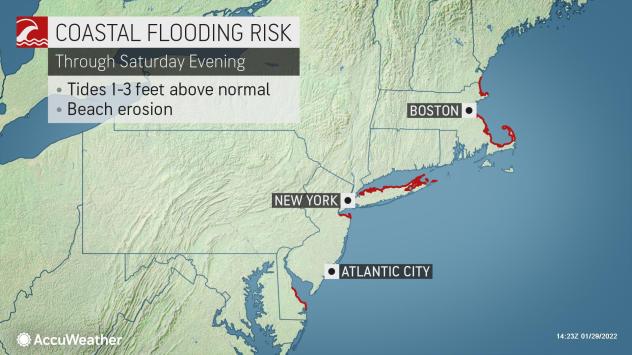 The expanding and strengthening circulation of the storm will drive freezing air all the way southward into the Florida Peninsula, while gusty winds into Sunday can continue to cause blowing and drifting snow in New England and the coastal mid-Atlantic.

The storm’s effects on travel can linger for days due to the number of crews and aircraft displaced by the storm and the amount of snow that the storm will unload. However, after Arctic cold at end of the weekend and the start of the week, temperatures will moderate during the middle of next week, and that should help with cleanup and travel to get back on track.