Fierce winds, including gusts up to 70 mph, will be the most problematic, and potentially damaging aspect of the stormy weather as holiday travel ramps up across parts of the East.

The topsy-turvy week of weather will turn warm in the region, as quite mild conditions blanket the area. But after that, a sharp return to the cold could follow closely behind.

AccuWeather forecasters are continuing to track the potential for a storm to impact Americans hitting the roads and skies early to beat the Thanksgiving travel rush next Wednesday. The biggest impact from the gathering storm will be the strong winds associated with it, but heavy snow and drenching rains are also on the pre-Thanksgiving menu.

The major weathermaker threatening to throw a wrench in early travel plans is an upper-level disturbance that was way out over the northern Canada Rockies as of Friday. AccuWeather meteorologists expect that potent piece of energy to dive down over American airspace as it moves to the east and then develops into a winter storm over the Midwest this weekend.

Farther east, a stretch of the Interstate 95 corridor, including cities from Washington, D.C., to New York City and Boston, is likely to be spared the worst of the upcoming stormy pattern. However, rainfall may cause localized travel slowdowns on Monday and lingering wind could disrupt air travel and cause hazards for motorists in the days leading up to Thanksgiving.

Northern New England may not be so lucky, as the storm may evolve to a point where it could unleash drenching rain and even a period of snow. 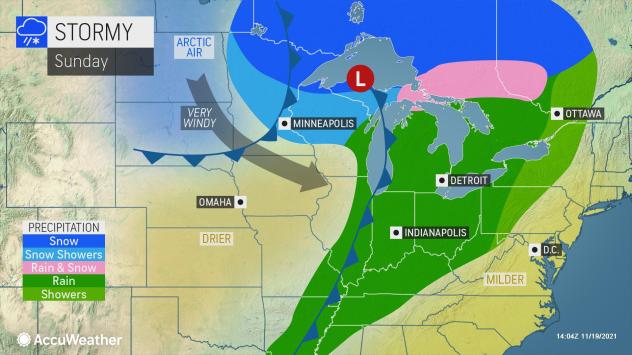 Overall, though, gusty winds are anticipated to cause the most widespread travel issues, especially for airline passengers.

As the winter storm arrives across the Midwest and strengthens, strong winds will develop from the Dakotas to Minnesota on Sunday and then spread southeastward across the Great Lakes and the Ohio Valley on Sunday night and Monday. West to northwest wind gusts frequenting 35-50 mph are likely in Minneapolis, Chicago, Milwaukee, Detroit and Cincinnati, with locally higher gusts possible in open areas, in between buildings and over high bridges in the region.

An AccuWeather Local StormMax™ wind gusts of up to 70 mph are anticipated along some of the southern and eastern shores of the Great Lakes as well as the mountains of West Virginia on Monday. In these areas, the winds could not only disrupt travel but could become locally damaging. 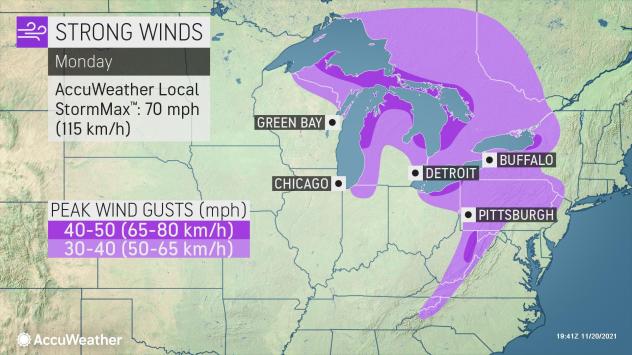 The gusts and associated turbulence could be significant enough to cause flight delays and lead to the risk of cancelations at some of the major and secondary airport hubs. Any ripple effect of delays or cancelations caused by those high winds could linger into Wednesday of next week, a day on which AAA is projecting some 4.2 million Americans will be traveling by air.

As a cold front associated with the storm pivots southeastward, a narrow zone of rain that can bring downpours and potentially hinder travel on the highway for a brief time will swing from the Central states on Sunday to much of the Eastern Seaboard on Monday.

The heaviest rain, with amounts expected to range from 0.50 of an inch to 1 inch, is likely to fall on portions of the Ohio and Tennessee valleys to the Appalachians. Much of that rain may fall over the course of a few hours and can lead to ponding on roads that drain poorly. 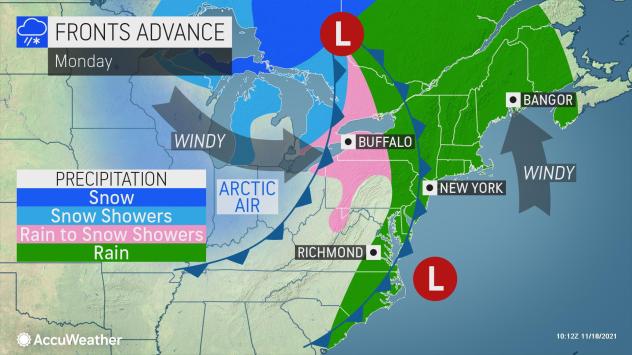 Colder air will rush in behind the system across the Great Lakes, triggering lake-effect snow to develop from the Upper Peninsula of Michigan to portions of the Lower Peninsula of Michigan and northwestern Indiana from Sunday night to Monday night. Prior to the onset of the lake-effect, locally dangerous snow squalls may accompany the leading edge of the cold air as it arrives in Michigan Sunday night and in Ohio on Monday.

A general 2-4 inches of snow is likely to fall during the lake-effect from northern Michigan to northwestern Indiana with areas of slush on the roads, but in places where bands of snow manage to persist for multiple hours, a foot of snow can pile up, which could cause serious travel disruptions.

Gusty winds may accompany rainfall and help create brief episodes of poor visibility and slick conditions on the highways in the mid-Atlantic during the day Monday and New England Monday night. 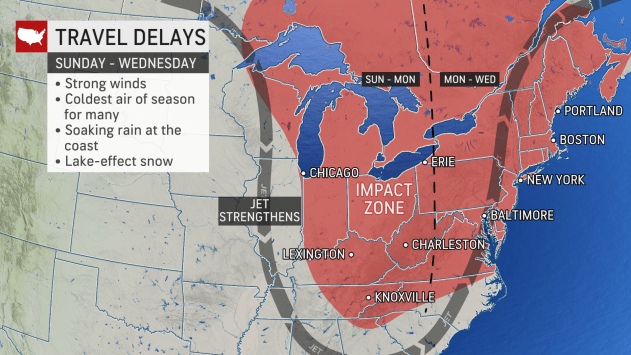 If the weather pattern were to just allow a single storm to form and cycle through, that would be the end of the travel impacts leading up to Thanksgiving in the Midwest and Northeast. However, the pattern will literally get a second wind as another storm forms and strengthens off the mid-Atlantic and New England coasts from Tuesday to Wednesday.

A heavy, wind-driven rain is in store for Maine for a time Monday night, and forecasters say there will be the potential for urban and small stream flooding. 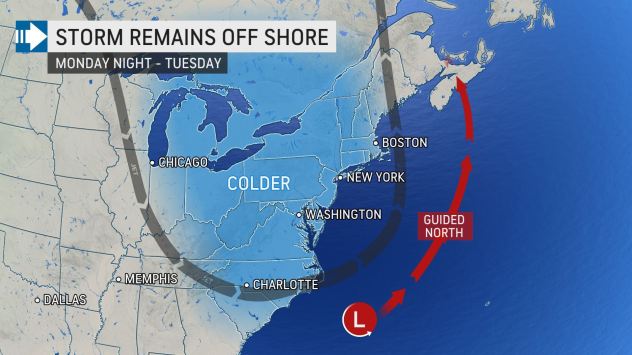 Meanwhile, the coldest air of the season so far will quickly arrive in the East from Monday into Tuesday, according to AccuWeather Chief Meteorologist Jon Porter. That cold air could lead to winter mischief in the form of snow in some areas of eastern New York state and New England, but only if the offshore storm were to form and track near the Atlantic coast.

He added that the combination of wind and other conditions will make it feel colder than the actual temperature. AccuWeather RealFeel® Temperatures can dip into the 20s F in many areas of the Midwest and Northeast and lower in some locations, so people traveling will need to prepare for bitter cold. Actual temperatures are forecast to dip to 22 in Chicago Tuesday morning and to 32 in New York City Wednesday morning. Both of those readings would be the lowest temperatures of the season so far. 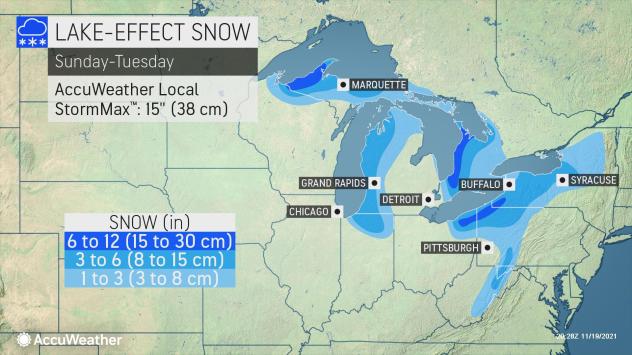 Just like in parts of Michigan and Ohio, locally heavy snow squalls may accompany the arrival of cold air in parts of Pennsylvania and western and central New York state on Monday. Dangerous conditions could result on major highways such as Interstates 80 and 90.

Lake-effect snow will ramp up for a time from Monday night to Tuesday night across portions of western Pennsylvania, western New York state and northeastern Ohio. It’s in these locations where a few inches could accumulate, in general, while a foot of snow could pile up in isolated areas.

A narrow band of wet snow could develop in central New England from Tuesday night to early Wednesday, but only if the storm at sea tracks right along the coast. Such a band of snow could wander toward Boston or perhaps eastern New York. Since temperatures are likely to remain above freezing during that time frame, roads would likely become wet or slushy with perhaps a few inches on non-paved surfaces in a worst-case scenario. 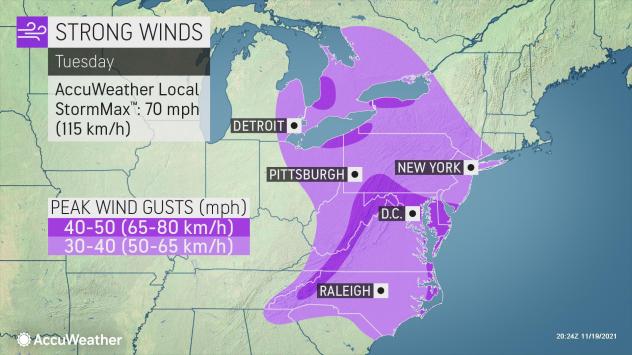 A more far-reaching factor with the secondary storm, just as with the storm from the Midwest, will be gusty winds. Gusts from the west and northwest from Tuesday to Wednesday will average 35-50 mph but can peak even higher, up to an AccuWeather Local StormMax™ of 70-mph gusts.

Just as in the Midwest, the gusty crosswinds and turbulence can lead to airline delays and potentially some flight cancelations during the holiday travel rush ahead of Thanksgiving. Impacts from to wind are likely to spread from the major hubs of Atlanta; Charlotte, North Carolina; Washington, D.C.; Detroit; Pittsburgh; and Philadelphia on Tuesday. 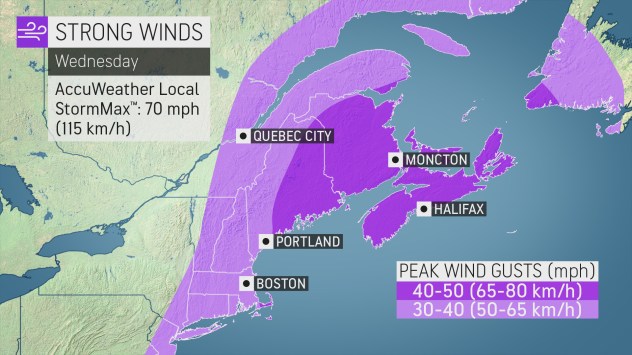 During Tuesday night and Wednesday, the zone of the strongest winds from the west and northwest will extend from near Philadelphia to New York City and Boston. Secondary hubs can also be adversely affected by gusty winds from Tuesday to Wednesday.

One other aspect of holiday travel is many Americans will be leaving home for several days, and weather conditions will be changing over that time. AccuWeather forecasters caution that people in the Midwest and Northeast are not the only ones who should prep their homes for cold weather prior to leaving for the holiday. 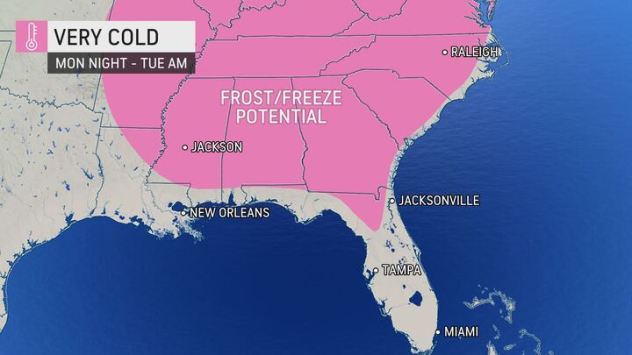 Those over the interior Southeast states who are venturing away from home for a Thanksgiving break should be aware of the risk of freezing nighttime temperatures in some areas beginning Monday night and potentially persisting through the middle of next week.

For example, low temperatures are forecast to plummet into the mid-20s Monday night and Tuesday night in Charlotte. Exposure to the cold air in unheated locations, such as in crawl spaces, can lead to frozen pipes. Property owners are urged to take precautions to avoid water damage and prevent pipes from bursting.