Nearly four years ago, the town of Paradise, California, was ravaged by the most destructive wildfire in history. Today, a new initiative is allowing residents to rebuild “better, safer and more resilient than before.”

Families rebuilding homes after the 2018 Camp Fire will soon be required to follow a new ordinance that calls for wildfire-resistant building standards.

If anyone knows about the term “paradise lost,” it’s the residents of one California town who witnessed the destructive impacts wildfires can inflict on their lives.

Paradise, California, was almost wiped off the map nearly four years ago when the deadliest and most destructive wildfire in the state’s history roared into town. The Camp Fire in November 2018 ravaged Paradise, which lies 170 miles northeast of San Fransisco and 90 miles north of Sacramento, destroying 18,000-plus homes, businesses and other structures, and displacing many of the town's 26,500 residents. At least 85 people were killed and more than a dozen were injured as a result of the fire's 153,336-acre path of destruction.

Paradise has been steadily rebuilding in the years since the disaster, using the help of a new program designed to prevent future fire catastrophes. In coordination with the non-profit Insurance Institute for Business and Home Safety, Paradise residents are taking part in the Wildfire Prepared Home program to ensure their new homes are constructed with fire-resistant material and using higher building standards established for wildfire-prone areas of the country. 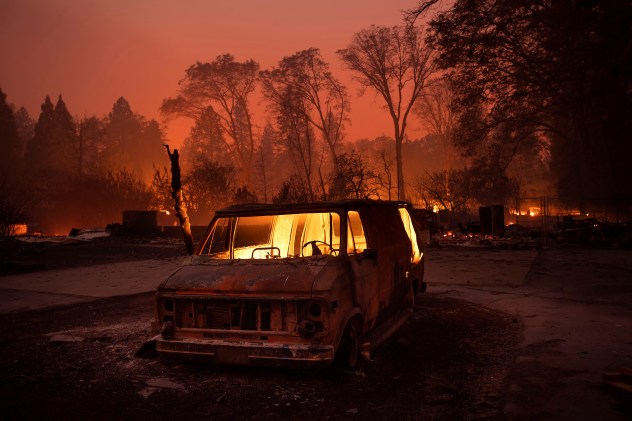 The Camp Fire of 2018 ravaged California, including the displacement of over 26,000 residents in the town of Paradise. (Photo via AP)

“We recover as a community,” Paradise Mayor Steve Crowder said at a recent press conference. “It’s essential to make sure we rebuild better, safer and more resilient than before.”

As of July 14, new homes built in Paradise will be required to have the IBHS’s Wildfire Prepared Home designation. Builders will have to follow a host of new protocols, including creating homes with fire-resistant vents, gutters, roofing and siding materials.

“We have enacted more stringent local ordinances to require all new homes to be built to the wildfire designated home standard,” Crowder said.

The IBHS system for wildfire-proofing homes addresses vulnerable areas of new abodes, including roofing where blazes can ignite.

“It’s very important for the homeowners to maintain their roof, take the debris and pine needles and everything (off the roof),” Faraz Hedayati, a research engineer with IBHS, told AccuWeather's Bill Waddell.

Homes such as this one, rebuilt in Paradise, California, are made with new wildfire-proof safety standards in mind.

Another crucial part of the wildfire-proof building process is making sure the space around the home is cleared to eliminate any flammable material. This prevents flying embers from causing homes to catch fire.

“When (embers) hit the wall, they bounce back,” Hedayati said. “And by making that area clear of any debris or any vegetation, we make sure those embers have nothing to ignite.”

For the 1,400 homes already rebuilt in Paradise, IBHS is working with the Federal Emergency Management Agency (FEMA) on a hazard mitigation grant program that would aid homeowners in retrofitting their houses in order to achieve the wildfire-ready designation. 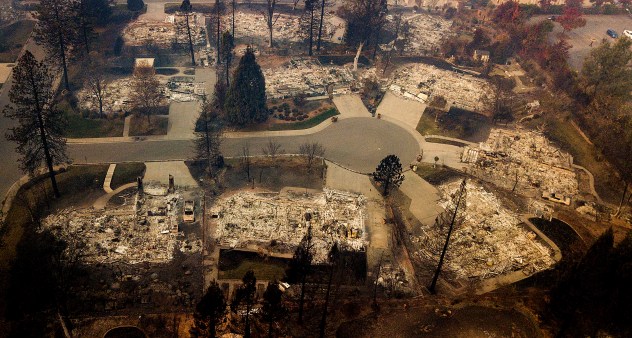 The town of Paradise, California, was scorched after the Camp Fire of 2018, but has begun to bring many of its residents back thanks to wildfire-resistant homes. (Photo via AP)

Paradise’s town council recently adopted the Wildlife Prepared Home requirements into ordinance, providing a uniform approach to reducing wildfire risk for those that have returned to town. As of June, nearly 8,000 residents have moved back, and 350 businesses have opened. Town officials expect the population to reach 75 percent of the pre-fire number by 2035.

The replenished population of the town may set the standard for the rest of California, says IBHS President and CEO Roy Wright, who saw family members lose their homes during the Camp Fire.

"For other communities in California, Wildfire Prepared Home offers a clear path to reduce the likelihood you have to rebuild from ashes," Wright said.

The return to Paradise will not be without threat, as wildfires are expected to rise in number throughout July in California. Virtually the entire state is experiencing drought conditions, according to the U.S. Drought Monitor. About 60 percent of the Golden State is under either an extreme or exceptional drought. This continued threat reinforces the need for wildfire-proof housing, officials said.

“We will see more intense fires … we believe these actions would meaningfully reduce the risk,” Hedayati said.