Northeast set to sizzle under 2nd heat wave of 2021

The hum of air conditioners and fans will begin once more in the northeastern United States as the second official heat wave of 2021 gets underway and lasts through most of the week.

After many residents from Richmond, Virginia, to New York City had a few comfortable weather days around the middle of last week with temperatures in the mid- to upper 70s, about 5-15 degrees Fahrenheit below normal for late June, the mercury will hit the 90-degree mark in many communities for consecutive days this week.

"A bulge northward in the jet stream pattern will allow for a dome of heat to build across the eastern U.S. from the Appalachian Mountains east to the coast," AccuWeather Meteorologist Matt Benz said. 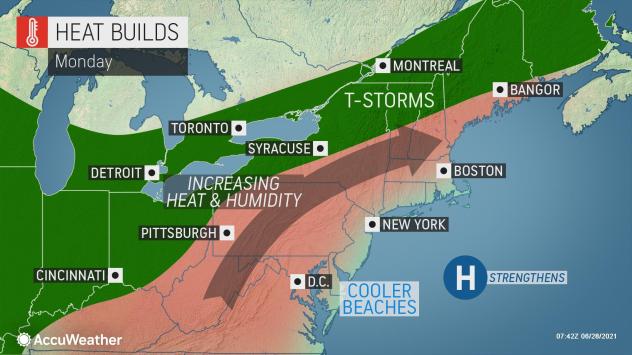 Strengthening high pressure off the East coast will bring increasingly humid conditions to the Northeast. Rounds of heavy thunderstorms will be mainly confined farther west and could cause flooding in parts of the Midwest through early week, leaving portions of the East dry. 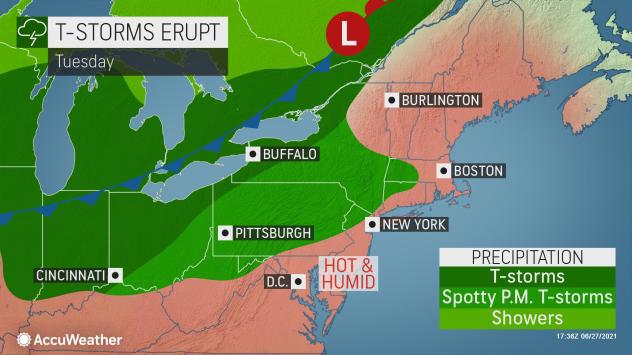 However, AccuWeather meteorologists warn that with the increased warmth and humidity levels, some isolated afternoon showers and thunderstorms cannot be completely ruled out, especially across the higher terrain of the Appalachians, Catskills and Berkshires.

For many, the hottest days will likely be Monday and Tuesday, but the warmth is expected to linger through at least the middle to latter part of the week, Benz explained.

Monday will be the second day in a row that many Northeast cities have hit the 90-degree mark, making it day two of the heat wave. New York City, Philadelphia and Baltimore all hit this mark on Sunday. 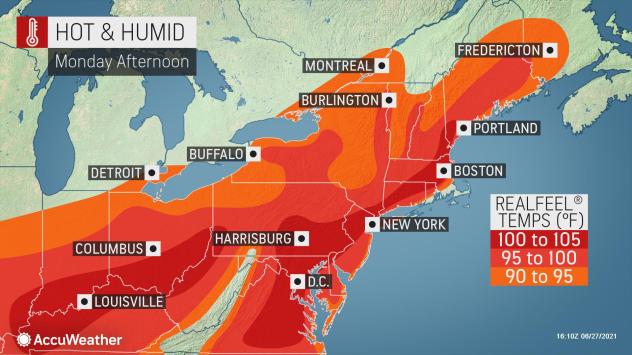 AccuWeather RealFeel® Temperatures will soar into the upper 90s to near 100 degrees from Maine to Ohio. Meanwhile, RealFeel® Temperatures in cities like Boston, New York City, Philadelphia, Harrisburg, Pennsylvania, Hartford, Connecticut and Washington D.C., will range from 100 to 105 degrees during the late-afternoon hours. 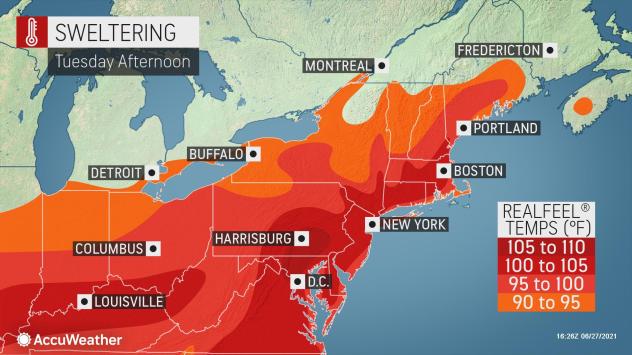 While the heat expands across the Northeast through Tuesday, some cities are set to challenge some record afternoon highs. On Monday afternoon, Boston is set to soar to 94 degrees, which is just shy of tying the record high of 97 degrees set back in 1991. Bangor, Maine, is another city that will come close to setting a new record high where the mercury is set to top off at 90 degrees Monday afternoon. The record for the date is 94 set back in 1991.

A full-blown heat wave is likely for many Northeast and mid-Atlantic cities. A heat wave is defined as three straight days with highs in the 90 degrees or greater in this part of the country. 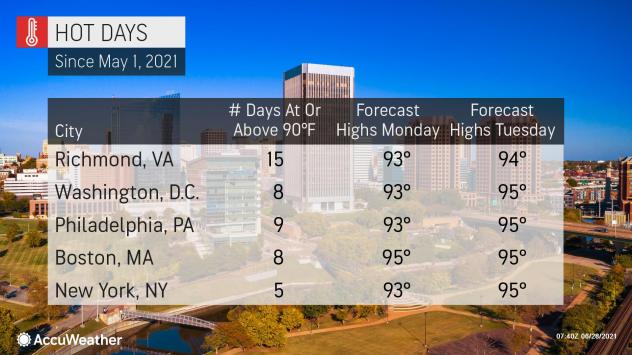 For example, in Washington, D.C., a four-day stretch of 90-degree highs is expected from Monday through Thursday. The nation's capital has already had one official heat wave from June 5 to June 7. The last time D.C. was at the 90-degree mark was on June 21, and so far this year, the city has had eight days of 90 degrees or above.

Meanwhile, New York City's heat wave is expected to last through Wednesday with high temperatures expected to reach the lower 90s each day, making this the second official heat wave of 2021. New York City has had five days where they reached 90 degrees or higher so far this year.

AccuWeather meteorologists warn that residents should err on the side of caution if they plan to be outside engaging in rigorous physical activity, including jogging and yard work with the surge of heat and humidity. It is encouraged that people take breaks, stay hydrated and avoid the peak heat during the afternoon hours each day, mitigating the risks for heat-related illnesses.

As interior portions of the Northeast heat up, many coastal communities and beaches from Maryland to the south coast of New England would be the place to go for those looking to beat the heat. Local sea breezes are expected to take hold along these coastlines, bringing temperatures back to more comfortable levels.

In their annual summer forecast released back in April, AccuWeather forecasters called for more 90-degree days than normal in many Northeast metropolitan areas. Philadelphia typically endures 31 90-degree days, and this summer's projection is for 33-38. According to AccuWeather meteorologists, the nation's capital deals with 45 days at or above 90 on average each year, and 2021 could feature as many as 47. 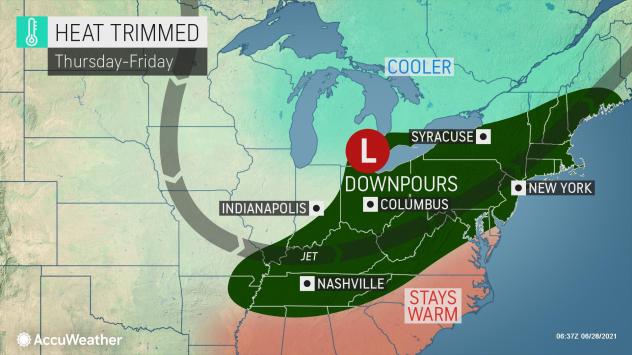 "If you’re not a fan of the heat, a slow-moving cold front should provide some heat relief by the end of the week in time for the Fourth of July weekend," Benz said.

Rounds of rain and downpours are possible late in the week as a storm moves across the Great Lakes region into the Northeast, bringing heat relief to many in regions that will sizzle throughout the week.