The North American monsoon is bringing much-needed rainfall across the Desert Southwest this week amid a relatively late start to the monsoonal season in many locations across the region.

This annual phenomenon is the change in wind direction from the prevalent westerly breezes most of the year to more of a south to southeast direction during the summer months. This flow of air brings moisture up from both the Gulf of Mexico and the Gulf of California.

Over an inch of rain fell during a one-hour stretch Tuesday afternoon at Zion National Park in southwestern Utah, creating a muddy mess that impacted traffic in the area. The downpours triggered flash flooding which resulted in mudflows that forced debris onto roads and also forced state route 9 to be closed for a period of time. National park officials also said there was an active technical search and rescue operation underway, but there was no word on injuries or missing persons.

The park remains open, but operations are modified due to the flooding. More flash flooding is possible in the weather pattern, forecasters warn. 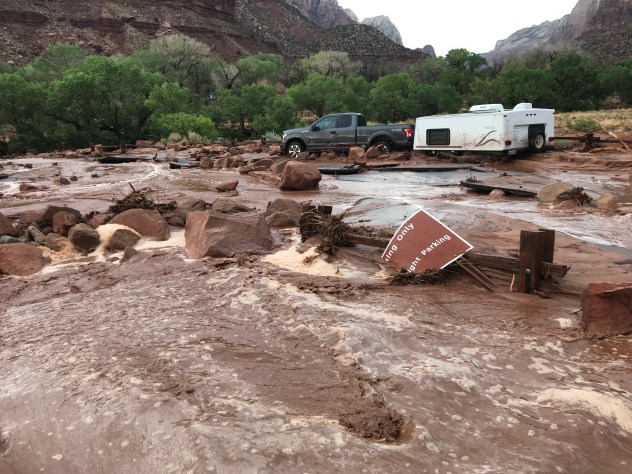 "Enhanced shower and thunderstorm activity across the Southwest is expected this week as moisture is drawn into the region from the Gulf of Mexico and Gulf of California," AccuWeather Senior Meteorologist Adam Douty explained.

As the Northwest continues to bake under a record-shattering heat wave, the Southwest could see some heat and drought relief throughout the week and beyond. 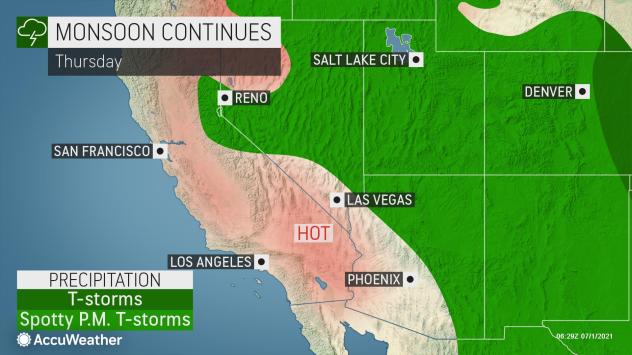 The monsoon season officially started on June 15 across the southwestern United States, but many cities are currently suffering from a severe drought that has gripped the region for most of 2021. Las Vegas, Phoenix, Albuquerque, Tucson, Arizona, and El Paso, Texas, are just a few cities that have been drought-stricken since the start of spring.

Phoenix has also been under an exceptional drought since the start of spring, where only 26%, or 0.18 of an inch, of its average of 0.70 of an inch of rain has fallen.

Much of the Southwest has faced similarly dismal precipitation amounts, and drought conditions continue to worsen as a result. In Arizona alone, all of the state is considered to be abnormally dry, with nearly 60% of the Grand Canyon State in an exceptional drought, the highest level of drought, according to the United States Drought Monitor. 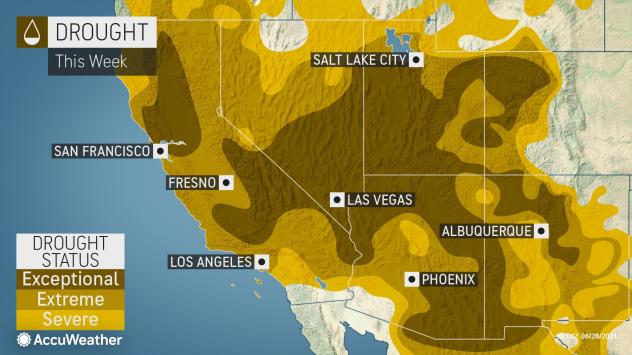 In fact, nearly 80% of the western U.S. is in the grips of severe drought and more than 25% of the region is facing exceptional drought.

But heat and drought relief will continue to evolve over the Southwest this week as moisture brought on by the North American monsoon lingers and spreads northward. 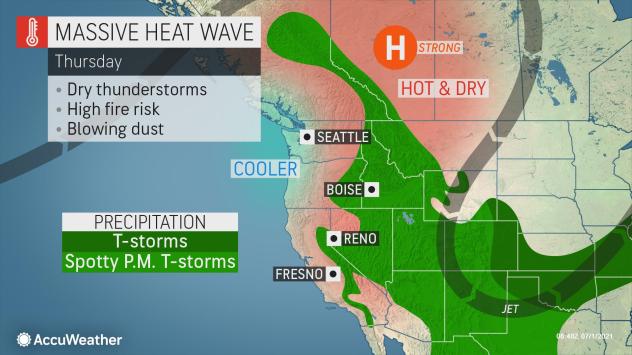 "A combination of a stalled-out front and an influx of moisture from the broad circulation of Enrique along with a push of moisture from the Gulf of Mexico and Gulf of California this week will result in widespread shower and thunderstorm activity across the Southwest," AccuWeather Meteorologist Brandon Buckingham said.

Thunderstorms are expected to spread across much of the Four Corners region. During the afternoon hours, thunderstorms will be most numerous as they pop up across the high terrain and drift into the lower valleys.

A combination of the extremely parched ground across the Southwest and thunderstorms that will be capable of producing gusty winds and dust storms, known as haboobs, may impact places like Phoenix and Tucson.

Visibility can rapidly drop to near zero and practically turn day to night in the most intense haboobs. Motorists must be cautious for these events when traveling.

Any intense downpour from a thunderstorm could cause streams or dry creek beds, known as arroyos, to rapidly fill with dangerously fast-flowing water.

"While the rainfall will be extremely beneficial across the Southwest, there will still be a risk of dry lightning strikes that could spark up new wildfire activity," Buckingham explained.

Dry lightning occurs when there is a dry air mass at the surface where rain falling from a thunderstorm evaporates prior to hitting the ground. Even though the rain does not reach the ground, lightning will still travel to the surface. This can be especially concerning because these thunderstorms can often contain strong wind gusts that could quickly fan the flames of a wildfire.

In their annual summer forecast released back in April, AccuWeather long-range forecasters called for an uptick in moisture and thunderstorms associated with the monsoon in early July that will last into September, periodically sparking flash flooding and dust storms while also delivering beneficial rainfall to the region.

"Although showers and thunderstorms attributed to the monsoon this year will be much more active than last summer, it may be far from one of the wettest on record. It is not likely that enough precipitation will fall to erase the long-lasting drought conditions," AccuWeather Lead Long-Range Meteorologist Paul Pastelok said.