Paramedics in Portland, Oregon, say they’ve seen a surge in 911 calls during the heatwave. One climate expert in Seattle says they can take a major toll on your health.

Portland has been at the epicenter of a record-shattering heat wave that has been sending temperatures soaring to previously unimaginable levels across the northwestern United States and western Canada. Among the victims left in the heat wave's wrath have been stricken residents, buckled streets and melted power cables.

Little relief has been offered even at night, and the city had record warmth on Tuesday morning by dropping only to 75 degrees Fahrenheit, almost 20 degrees above average.

The city continued its streak of searing heat Monday, setting a new all-time record high temperature in the process. 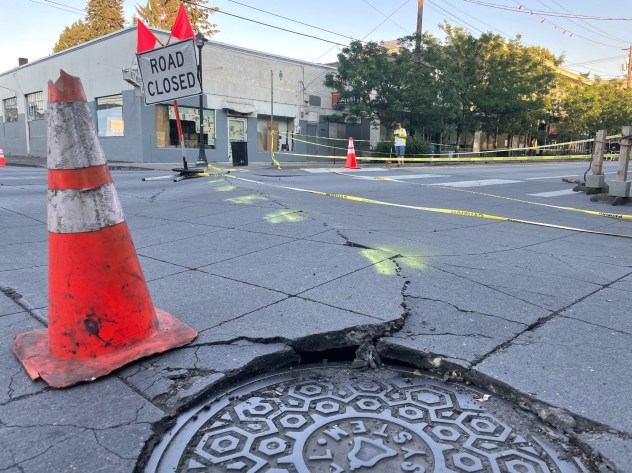 The intense Portland heat has caused streets and sidewalks to buckle. (AccuWeather/Bill Wadell)

The day's highest mark reached 116 degrees Fahrenheit, breaking the one-day-old record of 112 set Sunday. That had broken the anything-but-ageless record of 108 set Saturday. However, prior to that, the all-time high truly did seem untouchable, as no day had touched the previous record of 107 F since August 1981.

For a city that typically sees average highs top out in the low 80s during the year's hottest months, in July and August, this June blast of heat was never something many in the city could have imagined.

The city's infrastructure and operations were a testament to that. 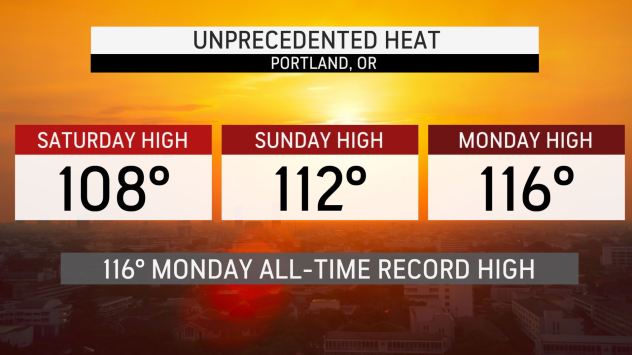 On Monday, power cables supporting streetcars in Portland were stretched to the extreme, melting in some areas.

Less than 50 miles south of Portland, the city of Salem, Oregon, posted the day's highest temperature, hitting a new all-time high of 117 degrees. For reference, Las Vegas has never recorded a day warmer than that.

On such a hot day, even cold conditions can become dangerous for those looking to cool off in rivers or streams.

The shock from cold water, as low as 50 degrees, presented a risk to even the most experienced swimmer, Robert McDonald told AccuWeather National Reporter Bill Wadell.

McDonald, operations manager with AMR, told Wadell that he was proud of the EMS response in the area, which has helped save lives as more than a dozen people were rushed to the hospital with heat illnesses Monday. 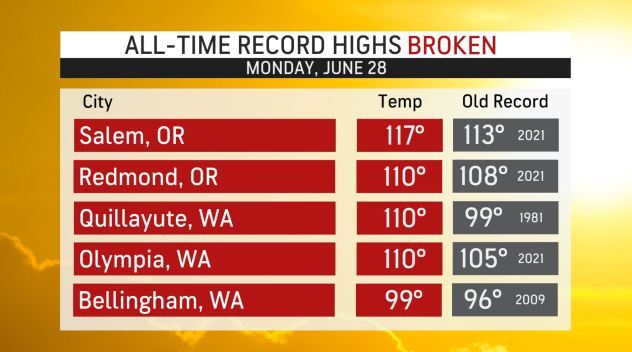 "This was a big turn for EMS in the region, but I gotta tell you that I applaud most everyone that’s participated," he said. "I applaud our crews, they have done an amazing job in what can only be called an austere event. It’s hot and difficult out there."

The Oregon Health Authority reported a total of 506 heat-related visits to emergency departments and urgent care centers over the past four days, according to CNN, and at least 251 visits occurred on Monday.

Across Oregon, authorities have speculated that the heat played a role in at least seven deaths. 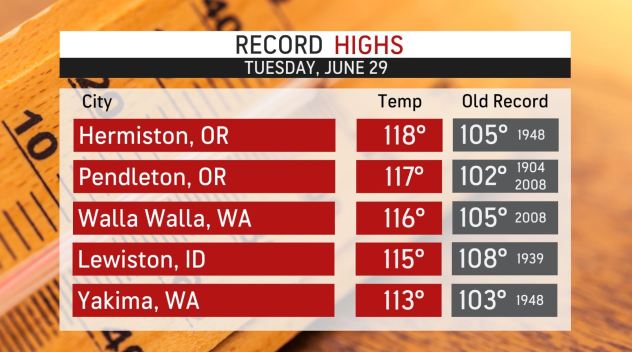 One employee at Ernst Nursery and Farms had been found unresponsive in the field at the end of his shift, an agency spokesperson told The Associated Press. The man, whose name was not released, had been working on a crew moving irrigation lines.

Another four deaths in Puget Sound City may have also been due to the heat, according to officials in Bremerton, Washington, though the city's medical examiner told the Kitsap Sun that firefighters cannot say definitively whether heat was the cause of death, the AP reported. Authorities in Bend, Oregon, have said that the deaths of two people without housing may have also been de to the extreme heat. 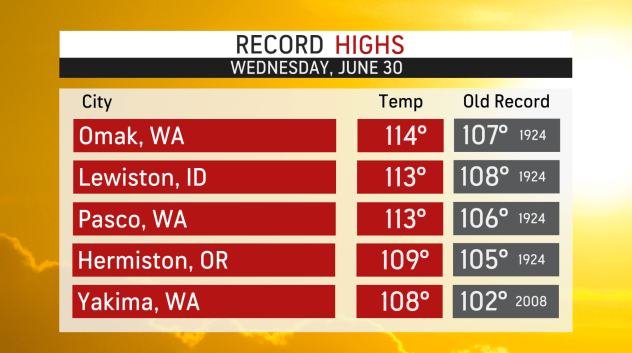 The heat wasn't any less brutal in Washington where at least 676 people visited emergency departments for heat-related symptoms from Friday into Sunday. Spokesperson for the Washington State Department of Health Cory Portner told CNN that 81 of those cases led to inpatient admissions.

One group directly stricken by heat illnesses has been pool lifeguards. The Portland Parks and Recreation Department announced the closing of public pools on Monday after multiple lifeguards experienced heat-related illnesses on Sunday. 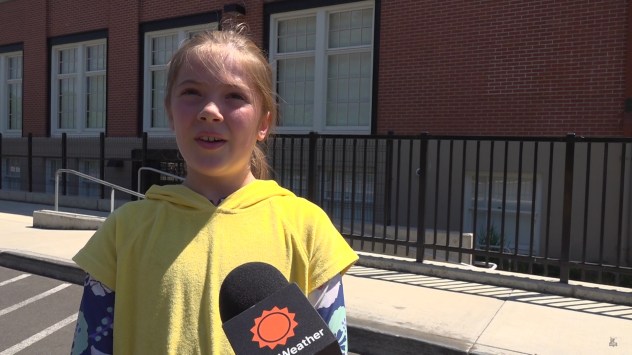 Nicola Biello, 9, was hoping to cool off at a Portland pool on Monday, but found the gates locked after multiple lifeguards had suffered heat-related illnesses over the weekend. (AccuWeather/Bill Wadell)

For Gena Biello and her 9-year-old daughter Nicola, that meant having to make a change of plans. Gena considered the safety of the lifeguards as they were driving to the pool, but told Wadell that she was just hoping the pool would be open for her own family's sake of cooling off.

"I thought that it does kind of make sense because the lifeguards would be really hot, but it’s also a little bit of a bummer that the pool’s not open," Nicola said.

"Ironically enough, who would have thought we’d come to a day when it’s too hot to swim?" Gena said. "That’s where we’re at now." 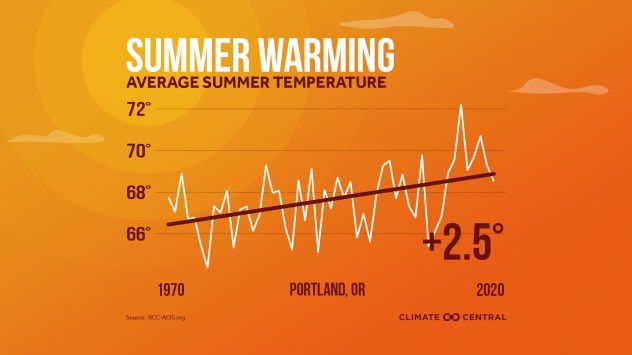 By Tuesday, the temperature in Portland had cooled off some as the city registered a high of 92 -- still well above average, but a far cry from the searing 116 a day earlier. Also on Tuesday, the 116-degree record heat had caught the attention of President Joe Biden.

Speaking at a warehouse in Wisconsin, Biden, who was discussing his proposed infrastructure plan, mentioned the high heat in Portland.

"Anybody ever believe you’d turn on the news, it says it’s 116 degrees in Portland, Oregon? 116 degrees," the president said. "But don’t worry, there is no global warming. It doesn’t exist. It’s a figment of our imagination."

On Wednesday, several more daily records were broken across the Northwest, though the heat is generally winding down, and the peak has passed. Hermiston, Oregon, set a new record of 109 F, which is four degrees above the previous record there from 1924.

As the week progresses, families like the Biellos may need to continue finding alternative methods to stay cool. AccuWeather meteorologists forecast the gripping heat to linger through Thursday.

Though the Northwest heat’s rage may soften slightly enough to allow the ink on the record books to dry, the unusually high temperatures will still remain in place, including well beyond the Fourth of July.

“In fact, record-challenging temperatures are likely to persist east of the Cascades and throughout western Canada into the early days of July,” AccuWeather Meteorologist Renee Duff wrote. “High temperatures can still soar close to 20 degrees above normal each day for many locations from the middle of the week onward.”