In the week since the volcano erupted in Hawaii, the lava has continued its slow advance, crawling at about 40 feet per hour, according to the U.S. Geological Survey.

This video from Hawaii shows lava flows from the Mauna Loa eruption slowly inching towards the Daniel K. Inouye Highway that you can audibly hear motorists driving through on Nov. 28.

(CNN) -- From a deep fracture in Mauna Loa's dark terrain, the volcano's magnificent eruption sends geyser-like fountains of lava spraying into the sky.

The fissure -- cracked open on the northeastern slope of the world's largest active volcano -- feeds a searing flow of molten rock that cuts through the contours of Hawaii's Big Island. Plumes of volcanic gas, including sulfur dioxide, rise into the air, and delicate strands of volcanic glass, called Pele's hair, float downwind.

In the week since Mauna Loa erupted, the stream of lava has coursed northeast, away from the volcano's summit. Once a quick-moving stream, the flow has slowed significantly as it reaches more softly sloping inclines.

Though no communities are at risk, the lava flow is inching closer to the Daniel K. Inouye Highway, a major artery that remains open, connecting two sides of this island, according to the U.S. Geological Survey. As of Sunday night, the stream was crawling forward at about 40 feet per hour, the agency said, and the unpredictable nature of eruptions makes it hard to say if or when it will reach the road.

"If the eruption continues, it might cover the highway. But at this stage, it's still about 2.3 miles away from the highway. But it is advancing every day," said Natalia Deligne, a volcanologist with the USGS at the Hawaiian Volcano Observatory. "We don't know how long this eruption is going to last, and that will dictate whether or not the highway becomes more threatened."

If it closes, residents' commutes could grow by hours as they seek alternate routes, creating "a tremendous inconvenience," Hawaii Gov. David Ige told CNN on Saturday.

Mauna Loa's eruption has attracted waves of awestruck visitors, some making the pilgrimage in the middle of the night to avoid the crowds, bundled in jackets and hats to protect against the chilly night air.

Also erupting now is nearby Kilauea, whose monthslong eruption in 2018 was one of the most destructive in recent Hawaii history, the USGS says. 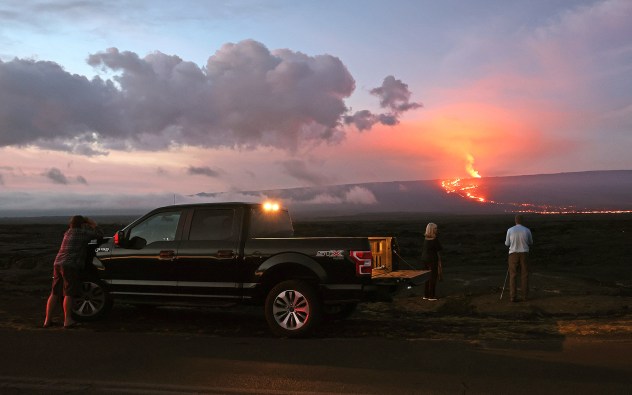 People stand on the side of the road to photograph the eruption of the Mauna Loa volcano on Dec. 4, near Hilo, Hawaii. (Justin Sullivan/Getty Images )

Kilauea began erupting again in 2021 and hasn't stopped. And though it poses no risk now to surrounding communities, Mauna Loa's rare simultaneous eruption has rekindled memories of the pain and destruction Kilauea wrought four years ago, when it wiped out hundreds of homes and dozens of miles of road.

Memories of past destruction resurface

Just 21 miles east of Mauna Loa, Kilauea's ongoing eruption is now confined to a lake of lava rippling at its summit. But the history of this volcano is painful for Hawaii's Big Island.

Its 2018 eruption spewed lava into the large Leilani Estates neighborhood, swallowing more than 700 homes and surrounding others with thick layers of volcanic rock, creating unreachable patches of green foliage in a sea of blackened destruction.

Dorothy Thrall can still walk to the spot where her community once stood, now blanketed with hardened lava. From the deck of her friend's home, she can see the edge where the lava stopped and blackened into volcanic rock, still steaming years afterward.

Mauna Loa's eruption has reopened some of the wounds she and her friends still have from 2018.

"I thought I was doing pretty good," Thrall said. "My neighbor called me Day 2 (of Mauna Loa's eruption), and she was in tears. She says, 'I have PTSD, and I didn't even know it.' And I started crying, too, and I said, 'I guess I do, too.'"

Thrall has no desire to see Mauna Loa's eruption, saying she has seen enough lava in her time. Still, though, she still appreciates the majestic beauty and importance of volcanic events. 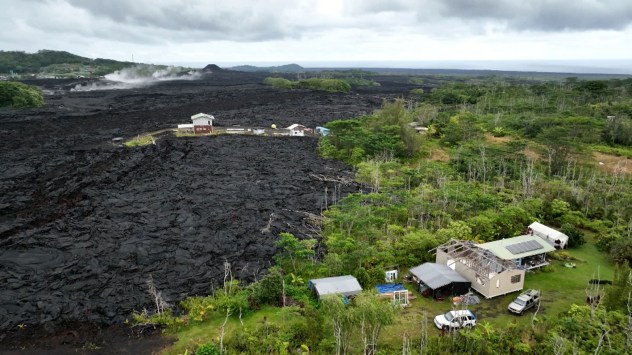 An area wiped out during the 2018 Kilauea eruption is seen Sunday from the sky. (CNN)

For many Native Hawaiians, the eruption of volcanoes, including Kilauea and Mauna Loa, holds incredible spiritual significance. Some have honored this week's occasion by leaving offerings and participating in traditional chants near Mauna Loa.

As onlookers and tourists flock, officials urge caution and advise people not to venture into closed areas that could pose risk of lethal volcanic fumes, sudden collapses and hidden earth cracks, the National Park Service said.

A spot for safe viewing is a one-way route is accessible through the Daniel K. Inouye Highway, the Hawaii County Civil Defense Agency said, noting vehicles parked on the roadway could get ticketed or towed.

The eruption has also created a risk of low air quality in some places due to volcanic ash and vog, or air pollution caused by volcanic gases. Sensitive groups, including children, the elderly and those with respiratory conditions, are advised to reduce outdoor activities that cause heavy breathing and reduce exposure by staying indoors and closing windows and doors, according to the Hawaii Department of Health.

World’s largest active volcano erupts after 38 years, increases tourism in Hawaii
Historians pinpoint the very 'worst year' ever to be alive
Cargo ship drew a crowd as it pulled up to dock encased in sea ice
Report a Typo