People in Portland and Seattle say stores are selling out of fans and AC units, and hotels with central air are booked solid during the heat wave.

It's hotter than it's ever been before in the Pacific Northwest and you'll have to excuse the locals for not being totally prepared over the weekend. In a region where many households aren't equipped with air conditioning, temperatures topped 95 degrees Fahrenheit, then 100, then 105 F in what has become the most menacing heat wave in Washington history.

A week ahead of Independence Day, nature's early barbecue celebration stuck the Northwest directly into the coals.

In Seattle, residents had never experienced heat the likes of which enveloped the city Sunday. Temperatures in the Emerald City topped out at 104 degrees F, a new all-time high for a place that's more commonly thought of for its rain than its heat. Even at its coolest, the temperature never dropped below 73 F, a record-high minimum for Seattle. 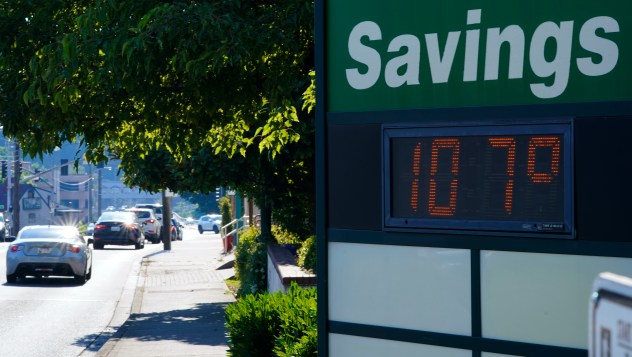 A display at an Olympia Federal Savings branch shows a temperature of 107 degrees Fahrenheit, Monday, June 28, 2021, in the early evening in Olympia, Wash. Seattle, Olympia, and other cities in the Pacific Northwest endured the hottest day of an unprecedented and dangerous heat wave on Monday, with temperatures obliterating records that had been set just the day before on Sunday. (AP Photo/Ted S. Warren)

Temperatures in the city easily eclipsed this new all-time high on Monday when they soared to 108 F.

The heat claimed the lives of at least two people and sent another 223 people to King County emergency departments on Monday, The Seattle Times reported. The King County Medical Examiner's office determined a 65-year-old Seattle woman and a 68-year-old Enumclaw woman had both died from hyperthermia, which is when the human body becomes dangerously overheated. In Oregon, authorities have speculated the extreme heat played a role in at least seven other deaths. 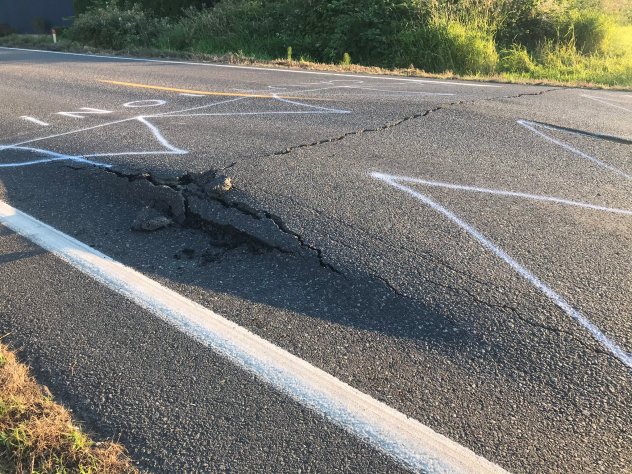 Roads in Everson, Washington, were forced to close due to roads buckling under the record-breaking heat. (Twitter/@wspd7pio)

In Everson, Washington, located about 100 miles north of Seattle, the heat proved so extreme that roads and sidewalks buckled. State officers shared photos of the cracked roadways, which rendered the streets unsafe and caused detours.

Even farther north on Tuesday, thunderstorms "exploded" across British Columbia, Canada, fueled by the extreme heat, and so did several wildfires. One of these fires, named McKay Creek Wildfire, was classified as "Out of Control" north of Lillooet, Canada.

In Yakima, located in the southeastern portion of Washington, Twitter users shared photos of sidewalks buckling under the heat and popping out of the ground.

Dr. Kristie Ebi, a professor at the University of Washington, told AccuWeather National Reporter Bill Wadell that she was particularly concerned for high-risk residents of the area, such as the elderly. 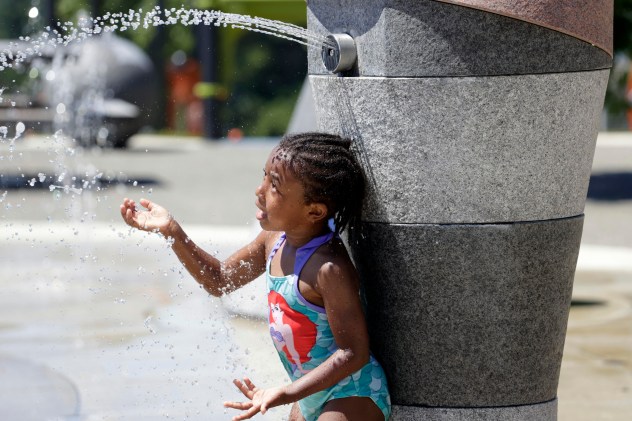 "We’re well under 50% of people who have access to air conditioning," she said. "I was quite surprised a couple of years ago when we had a heat wave…I was the only one who had air conditioning, no one else did."

Before Sunday and Monday's rotisserie, Seattle's prior record high of 103 F was set on July 29, 2009, the same day on which high-temperature records were also set in Olympia and Shelton. Both of those cities also had all-time records fall on Sunday, too, with Olympia reaching 105 and Shelton maxing out at 107, according to the National Weather Service.

The brutal heat ushered residents indoors and shuttered businesses as officials urged people to stay out of the sun's wrath.

Kevin Darras, of IAMDARRAS, sells custom-made T-shirts at Seattle's famed Pike Place Market and on Sunday told Wadell that the weather made a direct impact on his sales.

"The crowds are here, but they’re dissipating early. So we have to get here, get set up, get comfortable and try to make some sales," Darras said. "It’s definitely affecting sales -- probably cut in half. Still lucky to be down here and enjoying the weather. Even if it's hot, we’re staying cool." 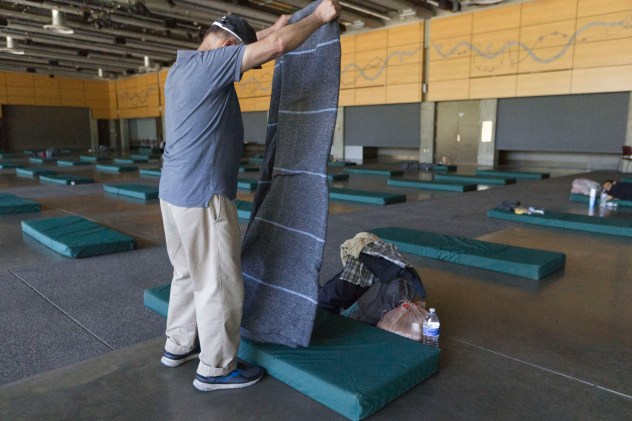 Roberto Cedomio prepares his bed at a cooling shelter run by the Salvation Army at the Seattle Center during a heat wave hitting the Pacific Northwest, Sunday, June 27, 2021, in Seattle. Yesterday set a record high for the day with more record highs expected today and Monday. Cedomio said he was glad to have this place available in the heat. (AP Photo/John Froschauer)

At its peak broil, the mercury in thermometers even touched the 115 mark in Pasco, Washington, on Sunday.

In Dallasport, Washington, the mercury rose to a staggering 118 F on Monday afternoon, which tied the state's all-time record high set at Wahuluke on July 24, 1928, and again at Ice Harbor Dam on Aug. 5, 1961. 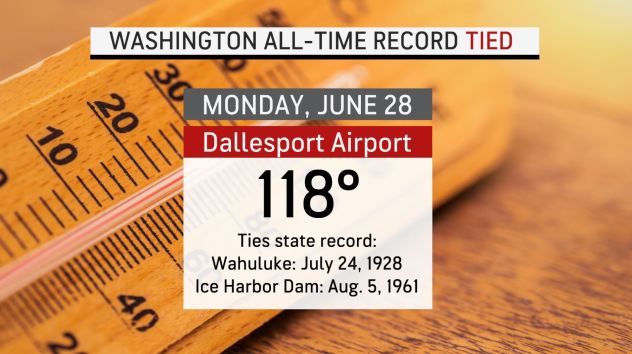 On Monday, Portland, Oregon, saw temperatures reach 115 as well -- the third consecutive day the city has set a new all-time record high. On Sunday afternoon, Portland Streetcar, a streetcar system in the city, tweeted out a photo of a damaged power cable.

"In case you're wondering why were canceling service for the day, here's what the heat is doing to our power cables," the company said. All streetcar service was shut down due to heat-related power outages on Sunday and later extended into Monday.

That kind of heat is enough to make any visiting tourists question their vacationing decisions. Eden Marcus, visiting Seattle from Chicago, told Wadell that increased amounts of water and sunscreen have aided in saving the trip. 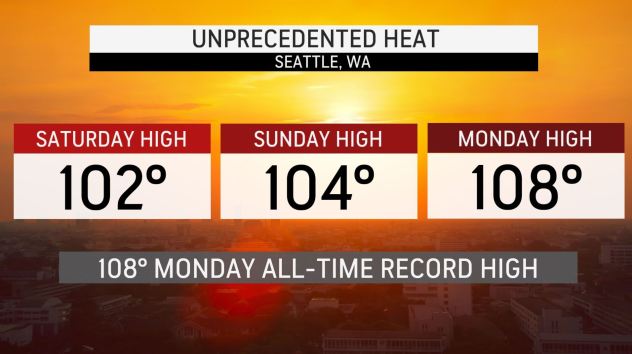 Seattle record three-straight days of 100 degrees or higher temps. That's the first time on record that has ever occurred, according to the NWS.

"It’s crazy hot. Right now it’s breezy but when you’re standing still it’s insane to be outside for more than a few minutes," he said.

But unlike many others in the city, Marcus' stay includes air conditioning. For residents, such as Sheri Grittman, the heat has been severe enough to consider moving to another state.

Grittman, her husband and their two cats became full-time RVers four years ago, she told Wadell, and the mobile homes one air-conditioning unit is certainly not doing the trick.

"Portland gets triple digits, where I’m from, but not up here, it’s always about 10 degrees cooler always from Portland. Very abnormal," she said. 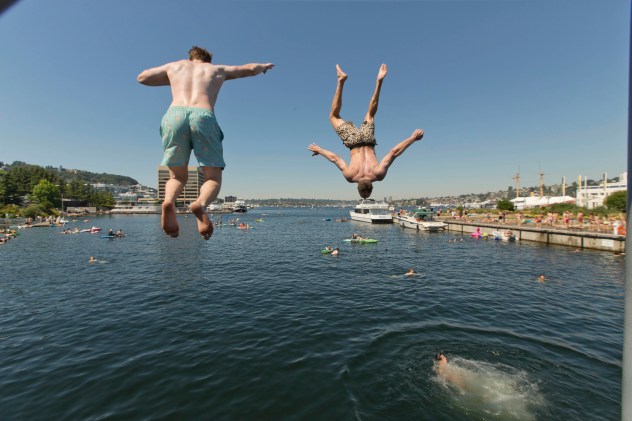 Two people jump from a pedestrian bridge at Lake Union Park into the water during a heat wave hitting the Pacific Northwest, Sunday, June 27, 2021, in Seattle. Yesterday set a record high for the day with more record highs expected today and Monday. (AP Photo/John Froschauer)

The heat proved daunting enough for Grittman that she even told Wadell on Sunday that she was looking forward to returning to work after the weekend for the sake of air conditioning.

The heat wave's wrath began in earnest last week in Washington before spiking over the weekend. Farther north, high-temperature readings of 116 F in British Columbia broke the all-time record for the highest temperature ever recorded in Canada.

In Oregon, it was in Eugene where the heat may have the most notable impact, forcing a temporary halt to the U.S. Olympic Track and Field Trials on Sunday. Athletes were forced to wait for the brunt of heat to calm down before competition could restart.